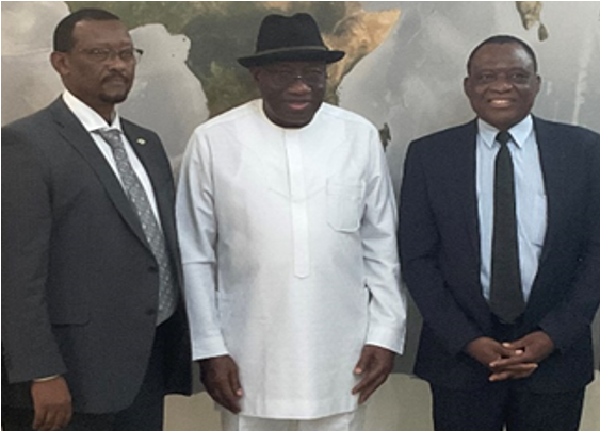 Making the announcement after meeting with the former president in Yenagoa, Bayelsa South-South Nigeria during the week, the AATF Executive Director, Dr Canisius Kanangire said that the appointment was informed by His Excellency’s track record of championing agricultural transformation on the continent.

Dr Goodluck Ebele Azikiwe Jonathan GCFR, GCON is a Nigerian politician who served as the President of Nigeria from 2010 to 2015 and had since been in the forefront of agricultural improvement on the continent

When accepting the appointment, Dr Jonathan said that as a former Head of State, his interest in serving the continent is driven by the interest he has in driving food security and transformation for better quality of life in Africa.

Dr Kanangire said that Dr Jonathan ’s commitment to uplift agriculture on the continent was exemplified by the Agricultural Transformation Agenda he pursued and diligently implemented in Nigeria during his tenure as President.

Under the agenda about 3.5 million new jobs were created based on the selected key products, while many more jobs were created from other value chains activities, with over N300 billions of additional income in the hands of Nigerian farmers and rural entrepreneurs. In addition, over N60 billion (US$380 million) injected into the economy from the substitution of 20% of bread wheat flour with cassava flour.

“Dr Jonathan was able to demonstrate in Nigeria that agriculture should be treated as a business and supported by relevant policies for the improvement of the livelihoods of our growing farming population.” he said.

According to the Executive Director, Dr Jonathan is a Pan Africanist who had stood for the eradication of rural poverty and the peaceful coexistence of the continent, hence his involvement in peaceful conflict resolution on the continent.

As AATF’s Ambassador, Dr. Jonathan will advocate for advancement of Africa’s agricultural goals and economic growth through application of innovative technologies and enhanced investment in agriculture.

‘AATF is honoured to have the former president as our Ambassador, whose role will accelerate ongoing efforts to improve our agricultural terrain,’ said Dr Kanangire.
About AATF (www.aatf-africa.org)

Founded in 2003 to address Africa’s food security prospects through agricultural technology, AATF believes that the agricultural sector is a key foundational pillar as Africa consolidates its economic growth and carves out its new position as a major global economic powerhouse and the next growth market in the world. It was formed in response to the need for an effective mechanism that would facilitate and support negotiation for technology access and delivery and formation of appropriate partnerships to manage the development & deployment of innovative technologies for use by smallholder farmers in SSA: