Benedict XVI: Pope who resigned from the papacy 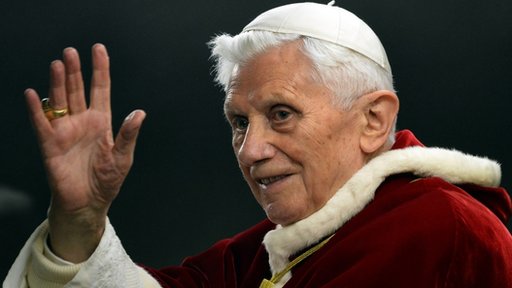 The 265th leader of the Catholic Church, Pope Emeritus Benedict XVI who died on Saturday, December 31, 2022 at the age of 95 is considered one of the 20th century’s greatest theologians who spent his lifetime upholding church doctrine.

But he will go down in history for a singular, revolutionary act that changed the future of the papacy — he resigned — the first pope in six centuries to do so. He was already 78 when he became Pope in 2005 but age and ill health quickly took their toll, prompting his resignation less than eight years later and died 10 years after he resigned.

Benedict resigned from his position in 2013 because of poor health and was the first pope to do so in 600 years as no other pope had stepped down since Gregory XII in 1415 and Benedict was the first to do so voluntarily since Celestine V in 1294. When he became 265th Pontiff of the Roman Catholic Church, it was the culmination of the rapid, and highly controversial rise of Joseph Ratzinger.

Pope Emeritus Benedict XVI, was born Joseph Alois Ratzinger into a profoundly Catholic family on April 16, 1927, in the southern German state of Bavaria. He was the son of a police officer with, as he later put it, "simple country roots". His youth was indelibly marked by World War Two. Forced to join the Hitler Youth, he served in an anti-aircraft unit which defended a BMW plant outside Munich.

Supporters portrayed him as a highly intellectual man who laboured to protect the spiritual inheritance bequeathed to him by Pope John Paul II but to his critics, he was the ultimate exponent and guardian of the Church's dogmatic approach to issues such as abortion and contraception. He became a prime candidate for rapid advancement and it was no surprise when his ideological soul-mate, Pope Paul VI, appointed him Archbishop of Munich, and then cardinal, in 1977.

The call to Rome was not long in coming. In 1981, Pope John Paul II appointed Ratzinger as prefect of the Vatican's office to protect the purity of Church theology — once known as the notorious Holy Inquisition. Ratzinger had criticised the Congregation for the Doctrine of the Faith as "an all too smoothly functioning body which prejudged every question almost before it had come up for discussion".

But he took to his work with typically energetic enthusiasm and during the 1980s, he spearheaded the church's campaign against "liberation theology", a potent blend of Catholicism and Marxism particularly popular in Latin America.

He also took an uncompromising line within the Roman Catholic Church. As theological enforcer for Pope John Paul, he had called priests and academics to Rome to explain themselves before requiring them to sign repudiations of their thinking.

In 2000, he published Domine Iesus (The Lord Jesus), a controversial document that stated, in no uncertain terms, the Roman Catholic Church's view that it was the one true Christian denomination, and that all others were "deficient". In 2001, he persuaded John Paul to put the Congregation for the Doctrine of the Faith in charge of all allegations of sexual abuse against priests. This had previously been under the control of individual dioceses.

Following John Paul's death in April 2005, it was Cardinal Ratzinger, as Dean of the College of Cardinals, who presided over the funeral Mass, delivering the homily, based around Christ's words "follow me" and days later, that is exactly what he did, triumphing in the papal conclave after a mere four ballots to become the spiritual leader of the world's 1.1 billion Catholics.

His belief in the supremacy of the Catholic Church was bound to cause friction and it surfaced in a controversial speech he gave in his native Germany in September 2006 when he was invited back to the University of Regensburg where he'd been a theology professor, he quoted comments by a 14th-Century Christian ruler who had said that the Prophet Muhammad's belief in a Holy war was evil and inhumane.

From chaplain to pope

After the Second World War, he first studied theology and philosophy and laid the foundation for what was to come when he became a chaplain in Munich in 1951. Ratzinger then made a name for himself as an academic. First, he obtained a doctorate, then became a professor at the University of Bonn with his inaugural lecture on “the God of Faith and the God of Philosophy”.

In 1966, he became the chair for dogmatic theology at the University of Tübingen, the continuation of an impressive academic career. But his devotion to religion did not end at the universities. While his writings gave him a profile, the papacy was still not on the horizon. However, Ratzinger also posed the dedication to progress.

“He started to build his credentials with the Vatican first with Paul VI, who made him cardinal and then with John Paul II, who made him the most important adviser, close to him in Rome for almost a quarter of a century,” Massimo Faggioli, a professor of historical theology at Villanova University said.
Indeed, on March 24,1977, at age 50, he was appointed the archbishop of Munich-Freising, before being named Cardinal Priest of Santa Maria Consolatrice al Tiburtino by Pope Paul VI in the consistory of June 27, 1977.

Four years later, in 1981, Pope John Paul II called Ratzinger to Rome, where he became the Prefect of the Sacred Congregation for the Doctrine of the Faith, the oldest among the departments of the Roman Curia. Ratzinger was thenceforth Pope John Paul II’s right-hand man. What the Pope proclaimed, Ratzinger underpinned theologically.

When Pope John Paul II passed away, the connection Ratzinger had built with the latter and the numerous other relationships he had championed within the Vatican became of great value.

Pope Francis joined pilgrims in St Peter's Square to preside over the funeral of his predecessor.

The dome of St Peter's Basilica at the Vatican was shrouded in mist as the cypress-wood coffin containing Pope Benedict XVI's body was brought out and placed on the steps.

There was applause from the faithful who had gathered for the funeral. Benedict was then interred in a tomb beneath the basilica.