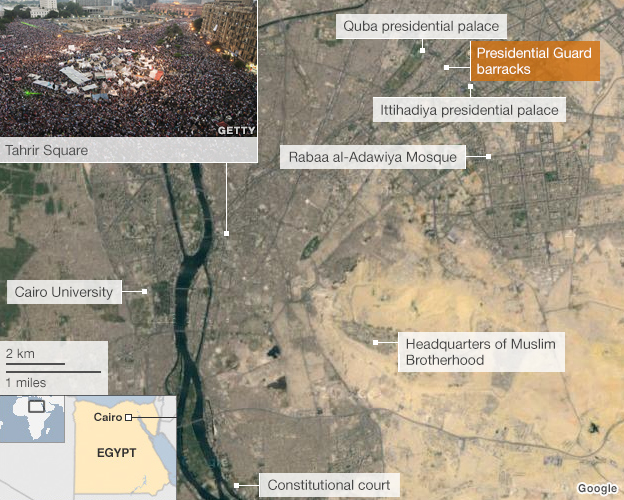 Tens of thousands of demonstrators are on the streets of Egyptian cities in rival shows of force by supporters and opponents of Mohammed Morsi, ousted as president by the military last week.

Mr Morsi's supporters have gathered outside a mosque and a barracks in Cairo to demand his reinstatement.

Anti-Morsi protesters are rallying in the capital's Tahrir Square.

Mr Morsi, Egypt's first Islamist president, is in detention, along with some senior Muslim Brotherhood figures.

He was replaced on Thursday by Adly Mansour - the head of the Supreme Constitutional Court - who promised to hold elections soon but gave no date.

The military has deployed troops in Cairo and other locations. More than 30 people were killed and about 1,000 people injured across Egypt in protests on Friday.

Mr Morsi's supporters have been camped outside the Rabaa al-Adawiya mosque in Cairo for more than a week. On Sunday, thousands marched from the mosque to the barracks of the Presidential Guard, where they believe Mr Morsi is being held.

Another group of pro-Morsi marchers have headed for the ministry of defence, reports the BBC's Quentin Sommerville, in Cairo.

Tamarod, the opposition movement whose name means "rebel" in Arabic, called on its supporters to rally in Tahrir Square and at the Ittihadiya presidential palace.

Egypt military planes flew overhead, trailing plumes of smoke in red, white and black, the colours of the national flag.

Tamarod has tweeted that it will not accept anyone except Mr ElBaradei, a Nobel laureate and former head of the UN nuclear agency, as prime minister.

However, the ultra-conservative Salafist al-Nour party is said to be unhappy with Mr ElBaradei, whom its members view as too secular.

In other developments, plain-clothes police raided the main office of al-Jazeera's Arabic TV channel in Cairo on Sunday and arrested the bureau chief.

Abdel Fattah Fayed is accused of operating an unlicensed channel and broadcasting reports that had a negative impact on national security.

The group - which included the blogger Ahmed Douma - were facing charges relating to clashes with Muslim Brotherhood supporters outside the organisation's headquarters in March.

Tamarod - which organised the recent anti-Morsi protests - had accused the ousted president of pursuing an Islamist agenda against the wishes of most Egyptians, and of failing to tackle economic problems.

The US and other Western countries have expressed concern over the Mr Morsi's removal, and have called for reconciliation and speedy elections.