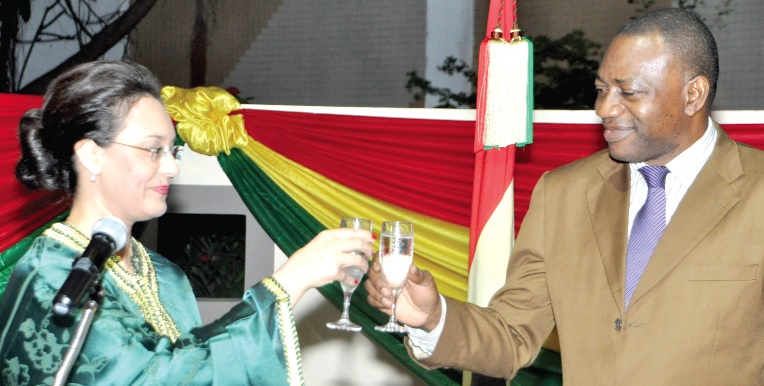 The Minister of State at the Presidency in charge of Public Private Partnership, Alhaji Abdul Rashid Hassan Pelpuo, has stressed that Ghana and Morocco have many things in common that would help to deepen bilateral ties between the two countries.

He was speaking in Accra last Tuesday at the 14th anniversary of the ascension to the Morocan throne of King Mohammed VI which fell on July 30, 2013.

Alhaji Pelpuo said the relationship between the two countries, which dates back to the era of President Kwame Nkrumah and King Mohammed V, was critical for the emancipation of Africa since both countries belonged to the Casablanca Group.

The Casablanca Group pursued a progressive stance and shared values on the question of African unity, which culminated in the founding of the Organisation of African Unity (OAU) in 1963.

He said Ghana looked forward to further strengthening and deepening its ties with Morocco and urged the negotiators to redouble their efforts towards establishing a more effective framework for collaboration by way of a Permanent Joint-Commission for Cooperation (PJCC) between the two countries.

“This platform would provide avenues for mutual cooperation between the two countries in the area of trade, commerce, agriculture, fisheries, tourism, energy and investment,” he said.

Lauding the achievement of the King over the years, Alhaji Pelpuo said King Mohammed VI had taken unprecedented steps to introduce transparency in the democratic governance of the country, adding, “He has also sought to introduce sweeping changes to reduce social inequality and usher in democratic reforms”.

He also commended the Moroccan government for granting yearly scholarships to Ghanaian students to study in Morocco.

The Ambassador of the Kingdom of Morocco to Ghana, Mrs Nezha Alaoui M’hammdi, said as a deeply-rooted African nation proud of its identity, Morocco shared with Ghana, the vision regarding African Renaissance for a prosperous and united continent.

She said after her historical commitment for freedom from fear, overcoming poverty and freedom in dignity, the nation had continued to exhibit strong leadership in democratic governance in Africa.

“It is a confirmation of the degree of maturity and entrenchment of Ghana’s democratic culture,” the ambassador said.

Mrs M’hammdi said Ghana’s unique historical situation also committed her to good neighbourliness, regional economic wellbeing and maintenance of peace and security locally and in the sub-region and beyond.

“In this regard, Ghana and Morocco are among Africa’s leading contributors of military troops involved in UN peacekeeping operations.”

On Ghana’s economy, she said it had over a period of more than two decades consistently witnessed positive growth, adding that “this back to back growth registered from 1986 culminated in the attainment of lower middle income status for the country in 2010.