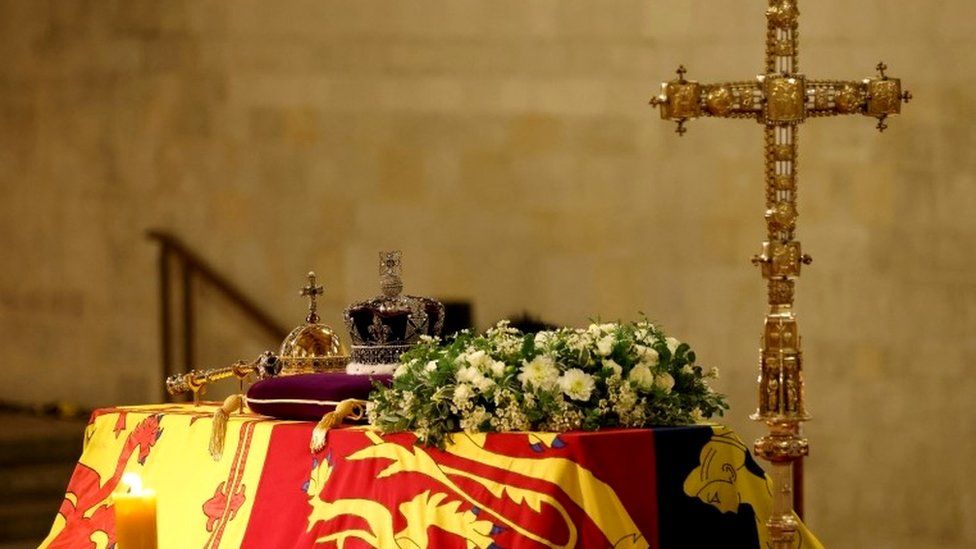 A Chinese government delegation has been banned from attending the lying-in-state of Queen Elizabeth II, the BBC understands.

House of Commons Speaker Sir Lindsay Hoyle is understood to have refused a request for access to Westminster Hall over Chinese sanctions against five MPs and two peers.

Queen Elizabeth will lie in state until her funeral on Monday.

The Speaker's office told the BBC it did not comment on security matters.

A Chinese foreign ministry spokesperson said they had not seen a reports about the ban, which first emerged on the Politico website.

That led to China's ambassador to the UK being banned from Parliament - a move which has now been extended to a delegation that wanted to pay their respects at Queen Elizabeth's lying-in-state.

UK-China relations are already strained and this ban is unlikely to help.

However, China's vice-president is expected to attend Monday's state funeral which will be held across the road from Parliament at Westminster Abbey.

According to the parliamentary rule book Erskine May, in 1965 Queen Elizabeth II consented that control of Westminster Hall would be shared between the Lord Great Chamberlain - who is appointed by the monarch - and the speakers of both the Commons and the Lords.

There is no specific mention regarding control of access for an occasion such as a lying-in-state, but when it comes to "invitations to foreign dignitaries to address both Houses in Westminster Hall" these are "ordinarily" issued by the agreement of all three.

Last September, Sir Lindsay and Lord's Speaker Lord McFall told China's ambassador to the UK he could not come to Parliament because of Beijing's sanctions.

At the time that ban was criticised by the Chinese government as "despicable and cowardly".

On Thursday, the group of seven MPs and peers, including former Tory ministers Iain Duncan Smith and Tim Loughton, urged the Foreign Secretary to withdraw an invitation to President Xi of China to attend the Queen's funeral.

In a letter, they said it would be "wholly inappropriate" for the Chinese government to be represented, given its human rights record.

China has detained Uighurs at camps in the north-west region of Xinjiang, where allegations of torture, forced labour and sexual abuse have emerged.

It has denied the allegations of abuse, claiming the camps are "re-education" facilities used to combat terrorism.

China's President Xi Jinping is on the guest list for the state funeral but is not thought likely to attend.

British officials expect the country will instead be represented by Vice President Wang Qishan.

A Downing Street spokesman said it was a convention that countries with which the UK has diplomatic relations should be invited to state funerals.