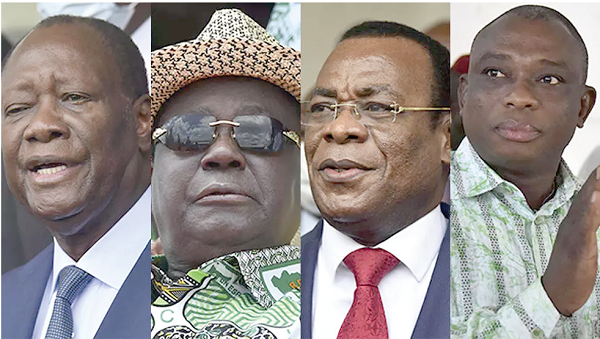 Ivorians will go to the polls Saturday in an election which promises to be one of the biggest challenges to political stability since the 2010-2011 post-electoral crisis in that country.

In what has been described as a controversial election, incumbent President Alassane Ouattara seeks a third term against opposition from three other candidates — former President Henry Konan Bedie, 86, leader of the Democratic Party of Cote d’Ivoire (PDCI), Pascal Affi Nguessan, 67, leader of the Ivorian Popular Front (FPI), formerly headed by President Laurent Gbagbo, and Kouadio Konan Bertin, 50, an independent candidate.

The rejection of nominations of 40 contenders, including heavyweight opposition leaders, ex-President Laurent Gbagbo and former rebel leader Guillaume Soro on the basis that they faced criminal sentences had already heightened the tension, with pockets of protests in some parts of the country.

Most of the others whose candidacies were adjudged invalid had failed to amass enough support from the public – a new electoral reform required candidates to canvass signatures from at least one per cent of the electorate in 17 of the country’s regions in order to stand.

President Alassane Ouattara’s bid for a third term in office has been fraught with controversy as opponents and legal experts point out that the Ivorian Constitution limits the Presidency to two terms.

However, his government maintains that because the Constitution was reformed in 2016, the term count should be re-set to zero.

For years, Ouattara had suggested that he would not run again and made repeated promises to hand power over to “a young generation”. He appeared to have backed his words by declaring in March this year that Prime Minister Amadou Gon Coulibaly, 61, would contest the election in his place.

However, Coulibaly’s sudden death from a heart attack in July this year shattered his plans for his political succession, and so Ouattara was forced to rethink.

But the situation may turn out of control in the former French colony, reminding the world of a similar controversial election in 2010 which resulted in the death of 3,000 people and Ouattara was declared winner in the elections against Gbagbo, who had also claimed victory earlier. Since late 2011, the International Criminal Court (ICC) has been trying Gbagbo for his alleged role in the violence.

Ouattara: In 2015, Ouattara won a landslide victory with 84 per cent of the votes, but this time around it will be hard as he does not have the support of Henri Konan Bédié (who is arguably now his greatest challenger) and faces anger over the exclusion of Gbagbo and Soro from the race.

On the campaign trail, he boasted of his presidential legacy of economic development.

Under his two terms, Ouattara has overseen strong economic growth, as well as security reforms and improvements in livelihoods.

Gross Domestic Product (GDP) has grown by an average of eight per cent annually (although the poverty rate remains high at 46.3 per cent). Under his watch, the government introduced universal health coverage, built new roads and massively expanded access to electricity.

Henri Konan Bédié: The 86-year-old President of the PDCI is Ouattara’s main challenger. Bédié served as President of Cote d’Ivoire from 1993 to 1999.

After being ousted in a coup in 1999, the first in the country’s history, he went into exile in France before returning to the country in 2002 during the outbreak of the civil war.

After coming third in the 2010 presidential election, Bédié urged PDCI supporters to back Ouattara in the second round in an ultimately successful bid to oust Laurent Gbagbo from power, and in 2015 his party supported Ouattara again, this time from the outset, helping the RHDP win by a landslide.

The 67-year-old ex-Prime Minister under Gbagbo is the ‘official’ leader of the FPI – the left-wing party set up by Laurent Gbagbo. However, after Gbagbo was sent to face charges of crimes against humanity at the International Criminal Court in 2011, the party split in two.

Gbagbo loyalists created the so-called ‘Gbagbo or Nothing’ faction and boycotted previous elections, refusing to recognise Affi N’Guessan as a legitimate replacement for the party’s founder.

Kouadio Konan Bertin: Affectionally known as KKB, Kouadio Konan Bertin once had grand ambitions of standing as a candidate for the PDCI. But after falling out with Bédié in 2015, he decided to run as an independent, coming third in the last election.

Konan Bertin tried to win the nomination to stand for the PDCI going into this election, but took an aim at Bédié in an interview with Jeune Afrique and was ultimately spurned by the party. The 51-year-old former MP is now standing as the election’s only independent candidate.

As the Cote d’ Ivoire goes to the polls today, the hope is that they come out of the exercise peacefully. However if we are to go by what is going on in Guinea following the election result then there is everything to pray for peace to reign in Cote d’ Ivoire.