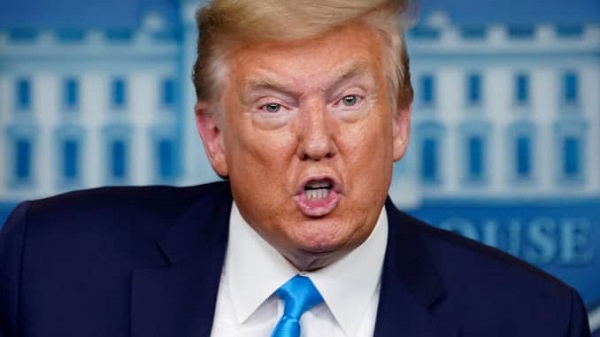 It's a "public health train wreck in slow motion," in the words of one health expert, and the best President Donald Trump cares to offer the thousands more Americans projected to shortly die of Covid-19 is the unsubstantiated prospect of a "beautiful surprise."

The US just hit its third highest ever peak of new coronavirus cases, multiple states are registering their own daily records and three are now taking the extraordinary step of imposing quarantines for citizens from pandemic hotspots. The world's most powerful nation lacks a coherent national strategy to meet another cresting viral crisis, the capacity or even the willingness to take steps that might stop it.

It is also led by a man who is suggesting by his actions and attitudes that he doesn't care that much about the unfolding tragedy.

Trump, who has previously predicted a "miracle" would occur or the virus would just disappear in the warmer weather, again declared falsely Wednesday that the danger had passed -- even with the nation racing towards another deadly summit of infection. In his latest misleading effort to create a picture of normality, Trump welcomed Polish President Andrzej Duda to the Oval Office.

"This is the first after Covid, after the start of the plague as I call it," Trump told his visitor, who was happy to play along after being given a huge political gift of a visit a few days before a national election and approvingly noted "the end of the coronavirus."

But the coronavirus pandemic in the United States is like watching a "public health train wreck in slow motion," said Dr. David Blumenthal, president of The Commonwealth Fund, in an Alliance for Health Policy and Commonwealth Fund webinar on Wednesday.

"It can be frustrating and perplexing," he added. "But now is the time to stop dwelling on the past and to start looking forward, and to ask ourselves how we can seize the moment, learn from experience and make things better."

Instead, the President's attitude appears to have crossed into callous indifference.

Trump has long denied the worsening situation over his failed gamble of pushing for aggressive state openings to revive the economy on which his reelection hopes may depend. He has constantly flouted guidance on mask wearing and social distancing, insisted on being pretty much the only entity in the Western world holding indoor events that risk turning into deadly super-spreaders and has failed to hardly ever mention the victims of the pandemic.

His behavior has brought about the extraordinary spectacle of a President running for a second term ignoring a massive national crisis that has killed tens of thousands of Americans and has no end in sight.

Trump reached for his familiar tactics of distraction on Wednesday, all but accusing Democrats of supporting unidentified demonstrators who he said want to haul down statues of Jesus Christ, as he stepped up they culture war tactics he adopted during the nation's national reckoning on race.

In a Wednesday news conference, Trump largely ignored the huge and worsening national crisis. But he delivered his latest evidence-free prediction of stunning medical advances on vaccines and therapeutics not yet supported by any evidence.

"I think you're going to have a big surprise, a beautiful surprise, sooner than anybody would think."

Vice President Mike Pence, the head of the White House coronavirus task force who hasn't held a public briefing with top health officials in weeks, apparently sought to spin the situation when he traveled up to Capitol Hill for lunch with Republican senators.

South Carolina Republican Sen. Lindsey Graham said Pence mentioned lowered mortality rates from the virus and said that the provision of emergency protective equipment in hospitals was in good shape.

Given the terrible economic consequences of lockdowns imposed to bend the curve of infections several months ago, there was always going to be a limited tolerance for long-term shutdowns. But the White House has long since given up offering Americans advice on how to prepare themselves for venturing out into the world.

Indeed, Trump gladly ignored his own government's advice on when it was safe for states to reopen.

The facts of the pandemic now clearly show that northeastern states that imposed painful restrictions on their people for longest -- such as New York and New Jersey -- have been most successful in reducing infections. Those that most enthusiastically accepted Trump's urging to open -- such as Texas, Florida and Arizona -- are now racing towards their own crisis points.

One exception is California, which despite months of draconian public health measures is still in the middle of its battle. The rising infections in opening states also raise the grim possibility that even those who have carefully begun to get back to business in the northeast and the Midwest will see infections soon tick up again.

A new battery of infection figures and academic projections on Wednesday reflected how the United States is heading into an intensifying duel with the virus, even as its economic competitors like the European Union -- now mulling a ban on American visitors and which has a higher population than the US -- begin to contemplate life after successfully suppressing the pandemic, at least for now.

Arizona is currently seeing the highest number of new coronavirus cases per capita of any state in the country, and more than any other state besides New York or New Jersey has experienced, according to a CNN analysis of data from Johns Hopkins University which puts the rate at about 38 new cases per 100,000 people per day.

Texas Republican Gov. Greg Abbott warned in an interview with KFDA-TV on Wednesday that his state was facing a "massive outbreak" of the virus. Florida piled up another daily record, of 5,500 new cases of Covid-19. CNN data based on figures collected by Johns Hopkins University also finds that 26 states now have rising infection rates, including 10 where cases are going up by 50% or more each day. Another 10 states are steady and 14 states are seeing falling new infections.

His fellow Sunshine State Republicans in the Senate don't seem to have better ideas.

"We're not where we need to be" Sen. Rick Scott said Wednesday, but while advocating wearing masks and social distancing, he added that Floridians were "tired of people telling them what to do." Sen. Marco Rubio, when asked about the situation, said: "Everyone should just wear a damn mask."

Health experts, whose predictions about the course of the virus and the consequences of reopening states have proven to be far more accurate than those of the White House, increasingly appear to be despairing about what is about to unfold.

Dr. Leana Wen, an emergency physician and visiting professor at George Washington University's Milken School of Public Health, warned that the sacrifices made by millions of Americans who lost jobs in lockdowns designed to flatten the curve of infections and ease pressure on hospitals were being squandered.

"Unfortunately, we reopened too soon," Wen told CNN's Don Lemon on Tuesday night. "We also reopened also in not the safest way possible and now we are seeing these surges all across the country. We are basically back to where New York was back in March except that this time I don't think there is the political will and the public support to have these shutdowns to be able to control this virus from really surging out of control."