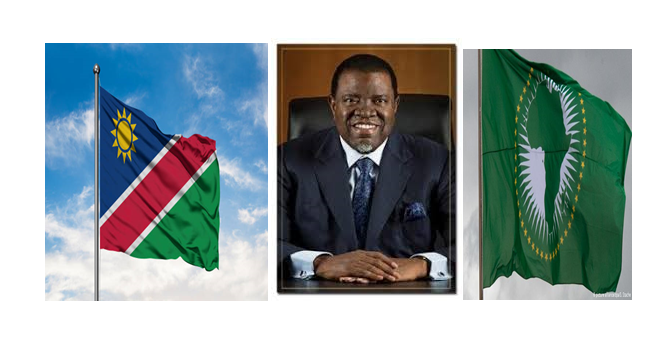 On the 21st of March 1990, Namibia gained its independence. On that day, the founding President and father of the Namibian Nation, Dr. Sam Shafiishuna Nujoma declared, “I move in the name of the people that Namibia is forever free, sovereign and independent”

On the road to Namibia’s independence, Africa and successive governments and people of Ghana walked side by side with the people of the then South West Africa.

Ghana truly lived up to the spirit of the profound and visionary declaration of Dr. Kwame Nkrumah that, “the independence of Ghana is meaningless unless it is linked to the total liberation of Africa.”

Subsequently, at the then Organization of African Unity, the Non – Aligned Movement, United Nations, the Commonwealth etc, Ghana consistently raised her voice for Africa’s decolonization and in support of the independence of Namibia.

Furthermore, the sisterly people of Ghana opened their hearts and homes to hundreds of young Namibians who received secondary education in the preparation for running a free and independent Namibia. Those professionals are today playing a pivotal role in the socio-economic development of Namibia.

During the transition to independence, Ghana availed a police contingent to the United Nations Transitional Group (UNTAG).

Therefore, every year on the 21st of March, when Namibia celebrates her independence, it is primarily in remembrance of the Namibian gallant sons and daughters who paid the ultimate sacrifice as well as her friends around the world, particularly Ghana for having unwaveringly stood firm with the people of Namibia till the end.

Diplomatic relations between Namibia and Ghana were established soon after Independence, on 21st March 1990 and remain excellent.

Namibia opened a Diplomatic Mission in Accra in 2014.

In further consolidating bilateral relations, high-level visits at State and Ministerial levels continue to be exchanged.

The last such visit to Ghana, albeit on a sad occasion, was in 2019, by His Excellency Dr. Hage Godfrey Geingob, President of the Republic of Namibia, in attendance of the final sending off of one of Ghana’s sons of the soil, Kofi Annan.

Namibia’s cooperation with Ghana is based on the premise that our two countries would become stronger and prosperous when we combine efforts to address common challenges and take advantage of shared opportunities for mutual benefit.

The PJCC serves as the platform for the conduct of bilateral relations and identifying and pursuing bilateral cooperation.

Currently, cooperation between Namibia and Ghana includes the following sectors:

Beyond bilateral cooperation, our partnership at major international institutions, like the African Union, the United Nations and other major multilateral platforms have continued to also yield mutual benefits.

Whereas bilateral relations are between governments, it is the people to people contacts that will drive bilateral cooperation, trade and investment between Namibia and Ghana.

In the same vein, it is people to people contact that will determine “The Africa We Want” as contained in the African Union Agenda 2063.

To this end, the Namibia – Ghana Friendship Association was launched on 13 December 2017. The aim of the Association is to strengthen the bonds of friendship between the people of the two countries as well as to complement Governments’ efforts in promoting commercial, technical, cultural and educational exchanges.

Membership is open to all individuals and entities that share the vision of the Association.

Building on the existing bilateral cooperation, the two countries also desire to increase bilateral trade in the context of the timely African Continental Free Trade Area, thus boosting our economic recovery and development in the post-Covid era.

Namibia is world-renowned for its export of beef and related products, beverages, dates, grapes, fish, salt and minerals to mention but some.

There are complementarities between the economies of the two countries which the private sector of Namibia and Ghana should take advantage of.

Namibia has a well-established fishing industry and seeks to increase the existing volume of its fish and marine products into the Ghanaian market.

Through our Permanent Joint Commission of Cooperation, we have recognized that trading relationship between the two countries could be of mutual benefit especially in the light of the fact that each country could serve as a launching pad for higher volume trading relations with other countries in southern and west Africa.

Determined to progressively improve the living standards of the Namibian people, the Government of the Republic of Namibia outlined its Development Blue Print – Vision 2030.

Its aim is to guide Namibia’s deliberate efforts to improve the quality of life of its people to the level of their counterparts in the developed world by the year 2030.

In 2005, His Excellency President Hifikepunye Pohamba was sworn in as Namibia’s Second President. He continued to pursue Vision 2030 with the implementation of the Third and Fourth National Development Plans.

His Excellency President Hage G. Geingob, who was sworn into office on 21st March 2015 for his first term put in place the Harambee Prosperity Plan ( HPPI) in 2016. The objective of HPPI was to fast track the implementation of National Development Plans for the timely realization of Vision 2030.

HPP is built and firmly anchored on the construct of a Namibian House, where Namibians come together to hold hands and build an inclusive economy with shared growth.

The HPPII is a targeted Impact Plan, consisting of prioritized short to medium term goals and strategic actions to continue accelerating national development towards Vision 2030 and Prosperity for All.

HPPII aims to ensure that Namibia is poised to respond to domestic socio-economic challenges and global opportunities, during and after the COVID-19 pandemic.

The pillar on International Relations and Cooperation seeks to enhance Namibia’s economic diplomacy and take advantage of the opportunities created by the African Continental Free Trade Area.

In this context, the High Commission of Namibia to Ghana invites the citizenry as well as the private sector of the two countries to take full advantage of the trade and investment opportunities.