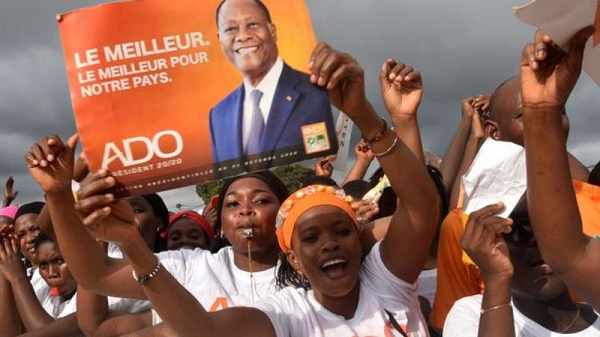 Ivory Coast's President Alassane Ouattara has won a controversial third term in office in an election boycotted by the opposition.

Turnout was put at almost 54%. The result has to be confirmed by the Constitutional Council.

On Monday, the Ivorian opposition said it was creating a transitional government which would organise a new election.

They got 1% and 2% respectively, while a fourth candidate, Kouadio Konan Bertin, also got 2%, according to the official results.

Opposition figures say it was illegal for Mr Ouattara to stand for a third term as it broke rules on term limits.

"Maintaining Mr Ouattara as head of state is likely to lead to civil war," M N'guessan said, adding that the opposition noted a vacancy of power.

But the president's supporters dispute this, citing a constitutional change in 2016 which they say means his first term effectively did not count.

His party has warned the opposition against any "attempt to destabilize" the country, which is still recovering from a civil war sparked by a disputed election in 2010.

At least 16 people have been killed since riots broke out in August after President Ouattara said he would run again following the sudden death of his preferred successor.

What happened on Saturday?
The election was marred by intimidation, violence and electoral malpractice, an advocacy group said of findings by independent election group Indigo Côte d'Ivoire.

"An election is the moment when a society comes together to experience and live out democracy, but the context that prevailed on election day... shows that a large segment of the Ivorian population did not experience this election in peace," PTI Advocacy Group said in a statement.

It added that a significant number of voters were disfranchised because polling stations did not open, adding that even those people who were able to vote did so "in a context of fear and anxiety".

Several polling stations were ransacked in opposition strongholds on Saturday and election materials were burned.

In the eastern town of Daoukro, protesters erected roadblocks. Meanwhile tear gas was used to push away demonstrators who gathered close to where the president cast his ballot in the main city, Abidjan.