Gambia president-elect Barrow 'to stay in Senegal until inauguration' 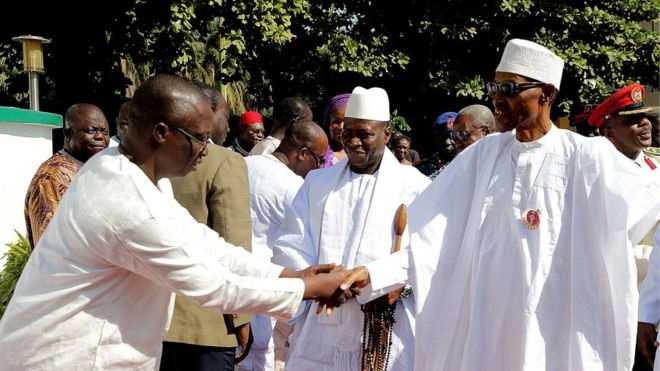 The Gambia's president-elect Adama Barrow is to remain in Senegal until his planned inauguration on Thursday, state media in Senegal say.

The move was requested by West African leaders after a Mali summit, APS said.

President Yahya Jammeh, who initially admitted election defeat, says he will not step down until May, when the supreme court can hear his challenge.

On Saturday leaders repeated their calls for Mr Jammeh to go voluntarily at an Africa-France summit in Bamako.

Mali's president Ibrahim Keita called for "proverbial African wisdom" to prevail to avert a bloodbath and there are growing fears that the uncertainty could cause a refugee exodus.

Thousands of Gambians, mostly women and children, have already crossed the border into neighbouring Senegal and further afield to Guinea-Bissau, where they do not require a visa, officials say.

Mr Barrow, who beat Mr Jammeh in last month's election, was at the Bamako summit and was referred to as the president.

Last week Nigeria's president flew to the Gambian capital Banjul to try to broker a deal but Mr Jammeh would not relinquish power.

Mr Jammeh's attempt to overturn the election result has been delayed because of a shortage of judges but his legal team has asked for an injunction to block Mr Barrow's inauguration.

The African Union has said it will no longer recognise Mr Jammeh's rule after his term ends.

The 51-year-old leader seized power in the country in 1994 and has been accused of human rights abuses, although he has held regular elections.