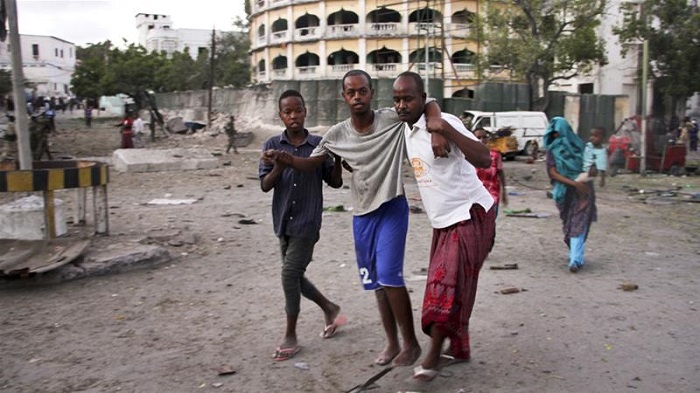 Mogadishu, Somalia - A deadly car bomb blast targeting a security checkpoint near the Presidential Palace in the Somali capital has killed at least five people and wounded several others.

Security officials at the scene told Reuters news agency on Tuesday the checkpoint 500 metres from the palace was rammed by a car bomb driven by a suicide attacker, causing the explosion outside a theatre.

Mohamed Hussein, a police officer, said: "Casualty numbers may rise. There were pedestrians along the street at the time of the explosion."

Radio Kulmiye journalist Farhio Hussein told Al Jazeera the victims included Somali soldiers at the checkpoint in downtown Mogadishu. The scene of the blast was close to second gate of Presidential Palace.

"I was at the radio station when I heard huge bang of the explosion. I opened the window and saw huge black smoke. I counted five charred bodies lying on the scene," Hussein said.

The armed group al-Shabab claimed responsibility for the suicide attack on its website.

Al-Qaeda-linked al-Shabab, which is fighting to overthrow the Somali government, has been blamed for a string of attacks in Mogadishu.

Al-Shabab was forced out of the capital by African Union troops in 2011 but still controls parts of the countryside and carries out attacks against government, military, and civilian targets in the capital and regional towns.

Last week, at least five people were killed and 12 others injured in two separate car bombings in Mogadishu.

As well as insecurity, Somalia is also battling famine, with three million going hungry because of a drought that is also affecting other parts of Africa.