Novak Djokovic broke the resolve of Roger Federer and the hearts of the Centre Court crowd as he battled his way to a fifth Wimbledon title in the most dramatic fashion.

This was a curiosity that turned into a classic, and it ended with a 122-minute deciding set that culminated in a first singles tie break at Wimbledon that came at 12-12.

That concluded with Djokovic taking it 7-3 when the 37 year-old Swiss skied a return out of court after four hours and 57 minutes of battling, the longest men’s final ever. 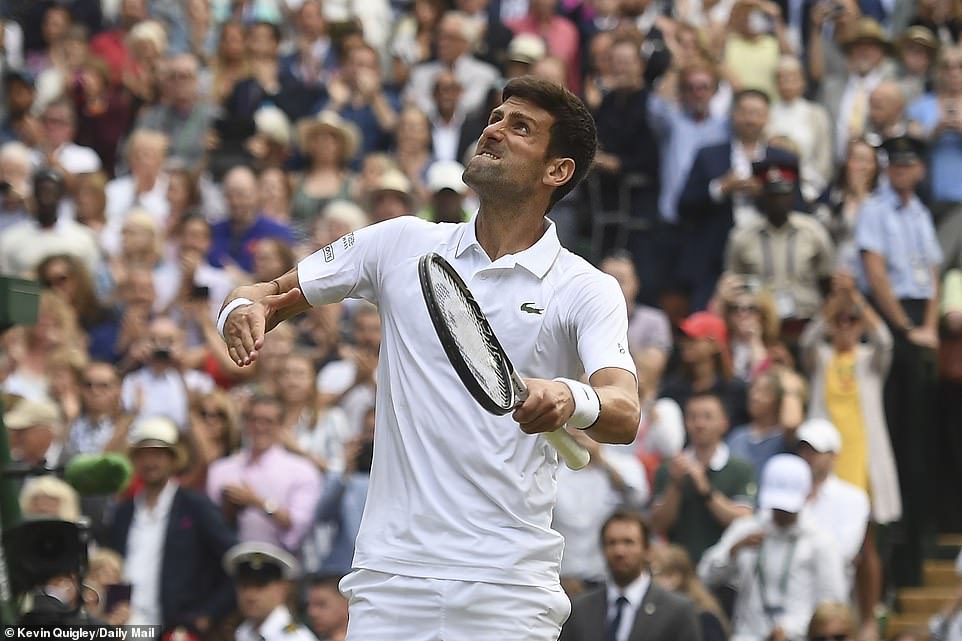 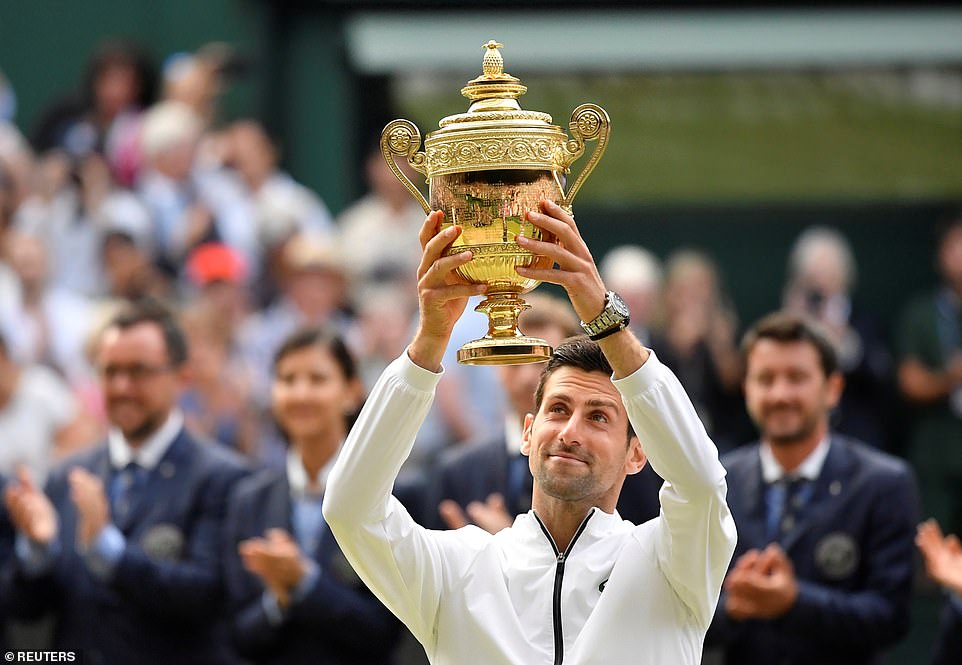 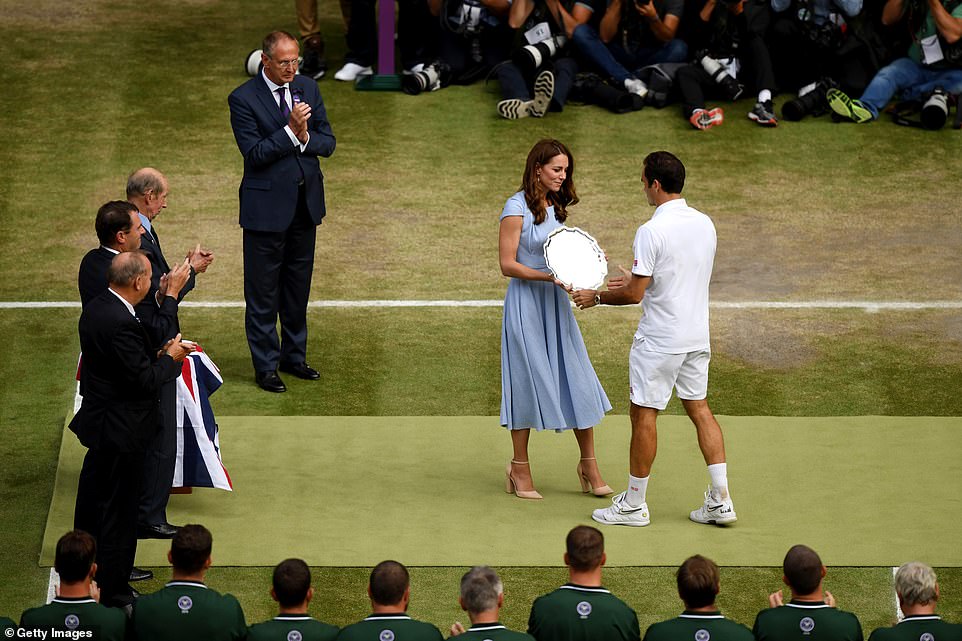 The Duchess of Cambridge hands over the runners-up trophy to Federer following nearly five hours of action in SW19
Djokovic now has 16 Grand Slam titles, while Federer stays on 20. In the fullness of time he will wonder how he did not win it because he had the chances, not least when he served for it at 8-7 in the fifth.

Arms stiffening with tension, it was Djokovic who held the more steady at the start of the tiebreak to get ahead to 4-1 and from there Federer could not get back.

It had been in many ways a match of contradictions, with the figures being in favour of Federer during the sets but his level dropping a crucial points in the tiebreak, which saw him make damaging unforced errors.

Federer had what chances there were in the first set before unravelling at the very end. He forced a first break point at 2-2, only to hit a wild inside out forehand that went into the tramlines. 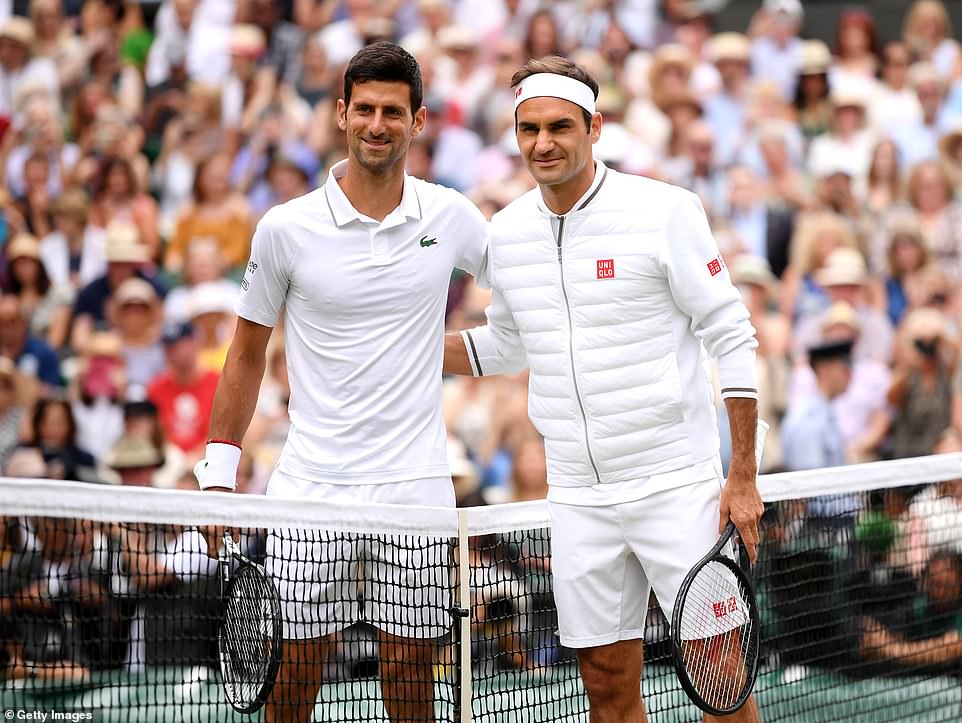 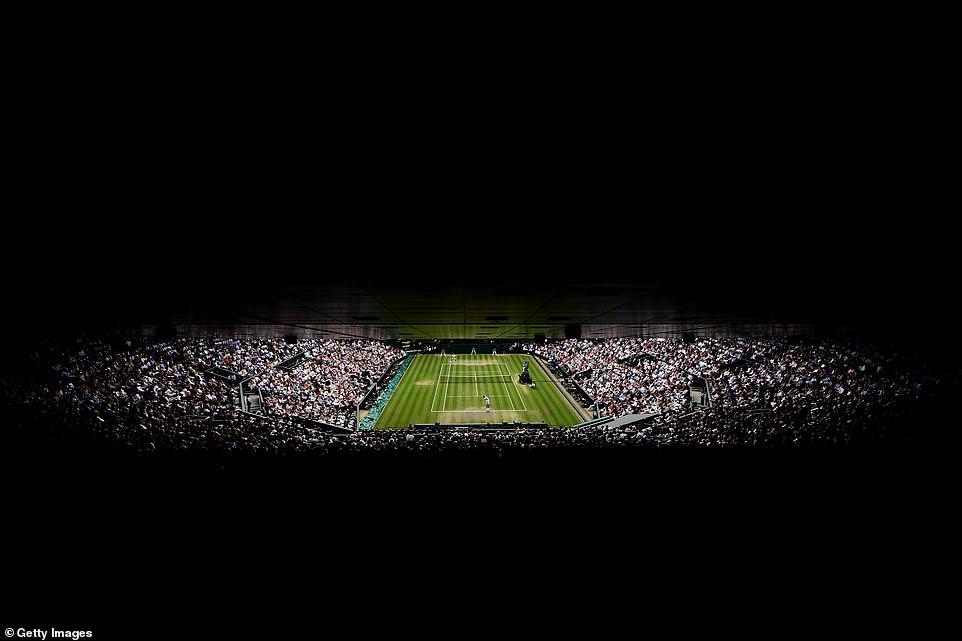 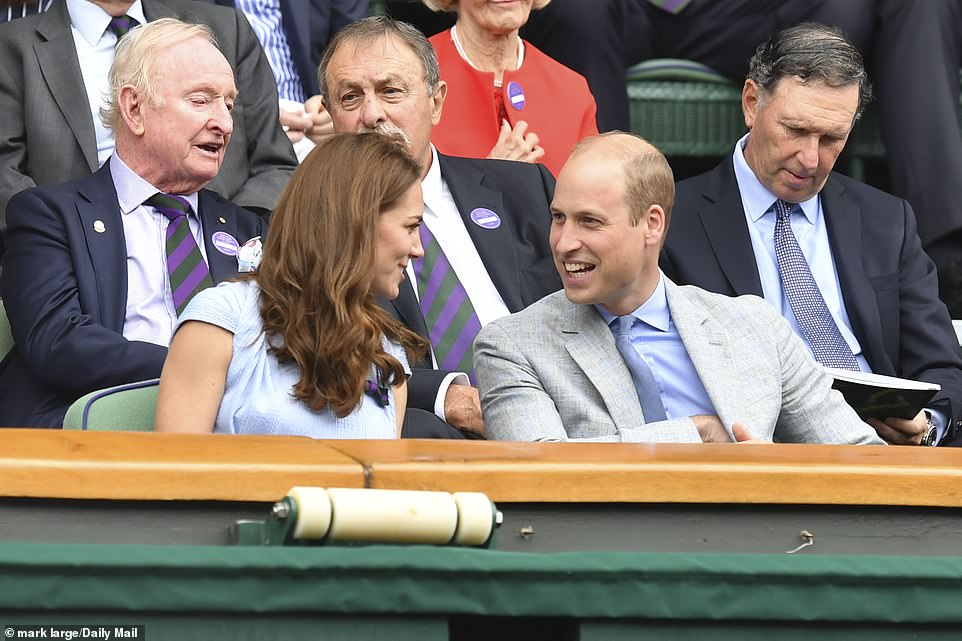 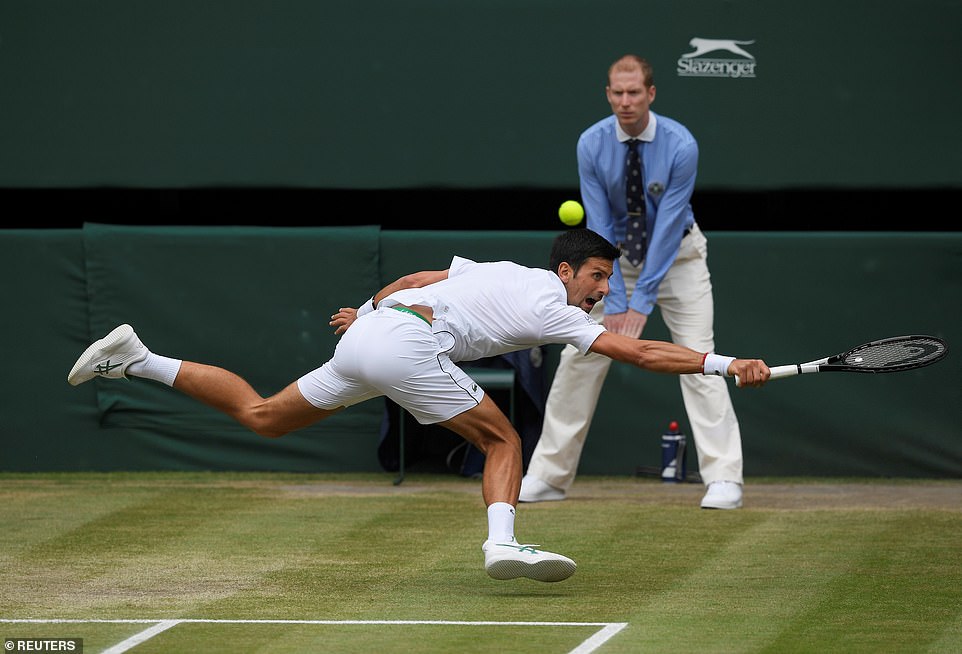 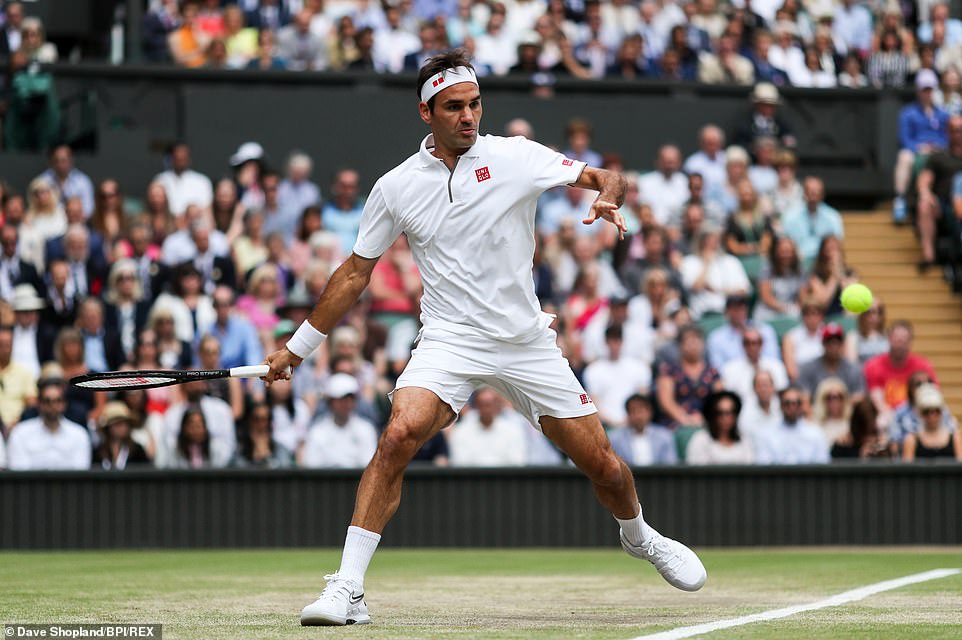 There were other glimmers as he repeatedly struck early half volleys from the baseline and plenty of skidding backhand slices that Djokovic had to dig out. It seemed he had finally got the upper hand when he surged ahead to 5-3 in the tiebreak, only to reel off a series of forehand unforced errors over the next four points that pretty much gifted it to the Serb.

The next set was a real tale of the unexpected and was to take just 25 minutes. The Swiss raced away with a double break and Djokovic barely looked interested towards the end, hitting a careless forehand long and striking a 112 mph second serve that resulted in a double fault.

His body language was flat with the crowd massively behind his opponent, although never outright hostile despite his double faults meeting with approval. With his serve in trouble and misfiring an enormous roar went up when Federer dropped a half volley over the net to create break point at 5-5 but the world number one one served his way out of trouble by directing his deliveries into the body.

Again Federer’s level dropped when the tiebreak came around. Sloppy backhand errors saw him slip behind to 1-5, and when his serve got him back into it again they returned, allowing Djokovic to take it 7-4. He had really not done anything special but he was in a dominant position. 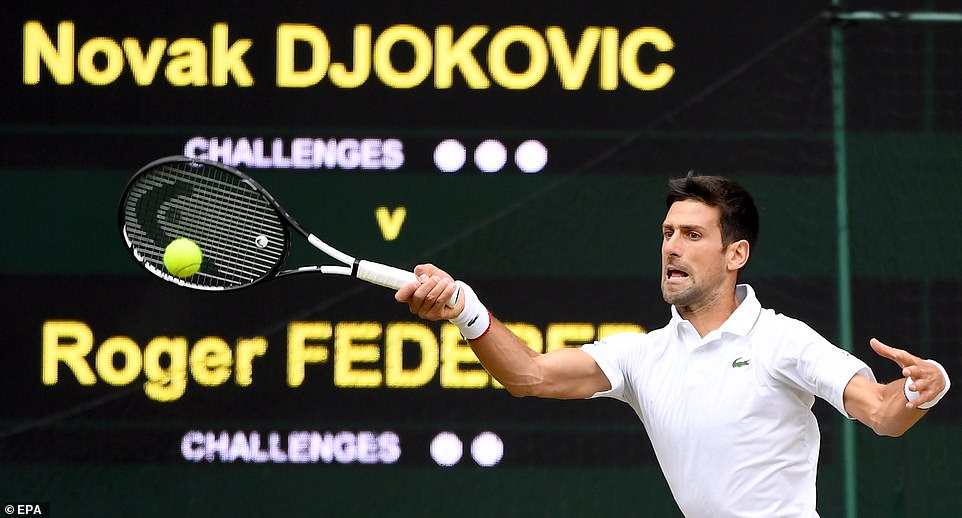 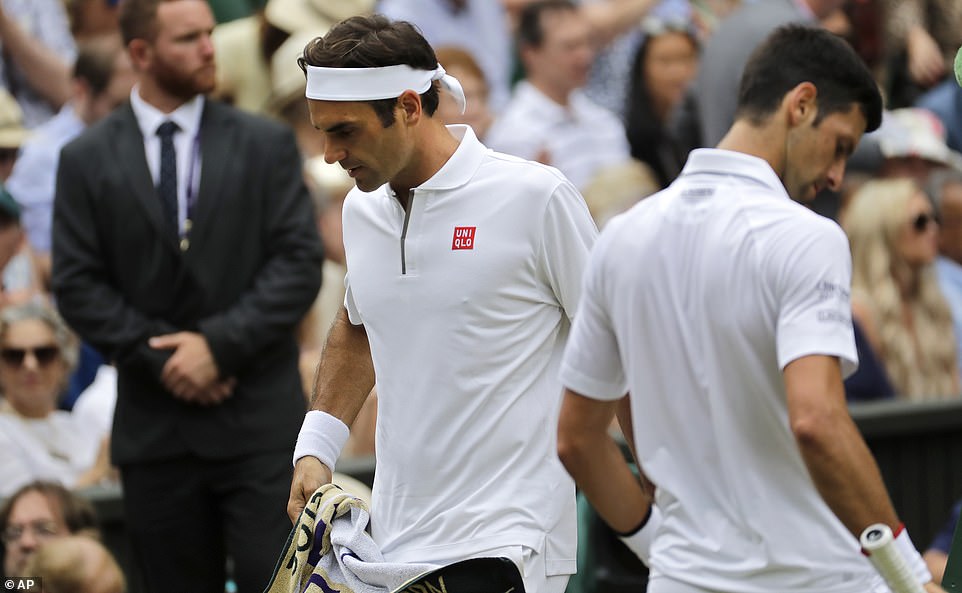 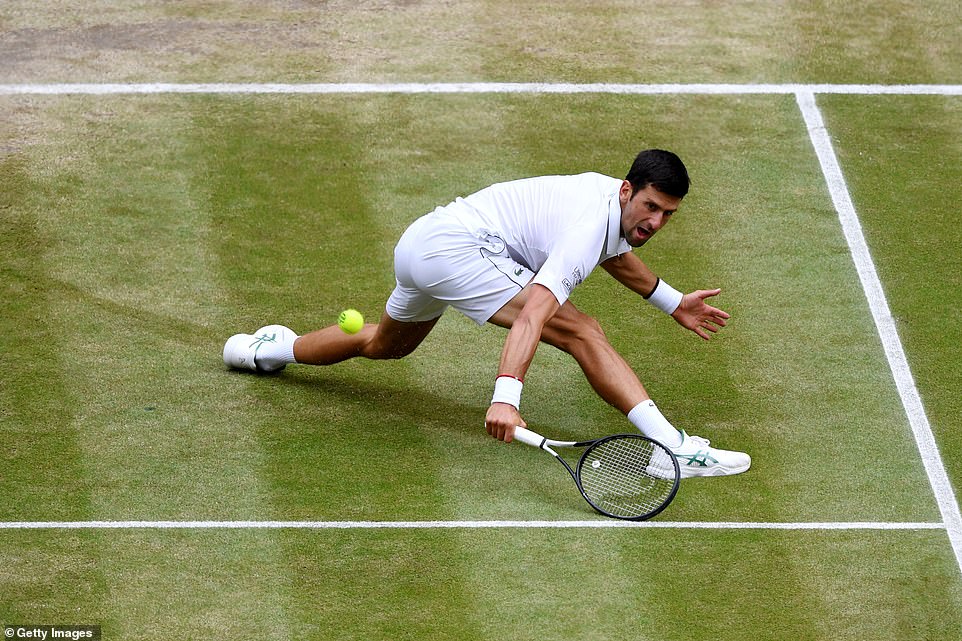 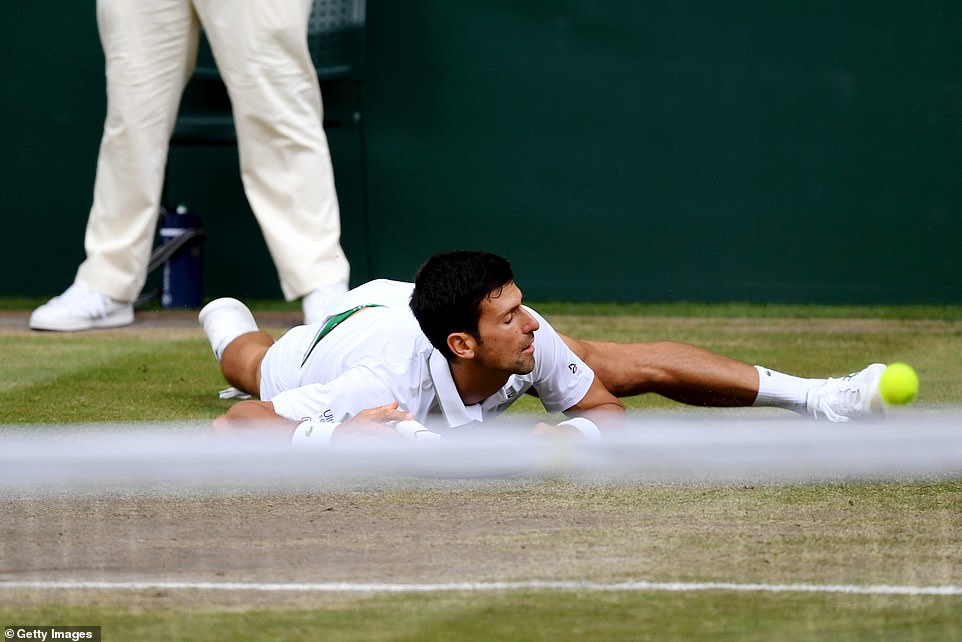 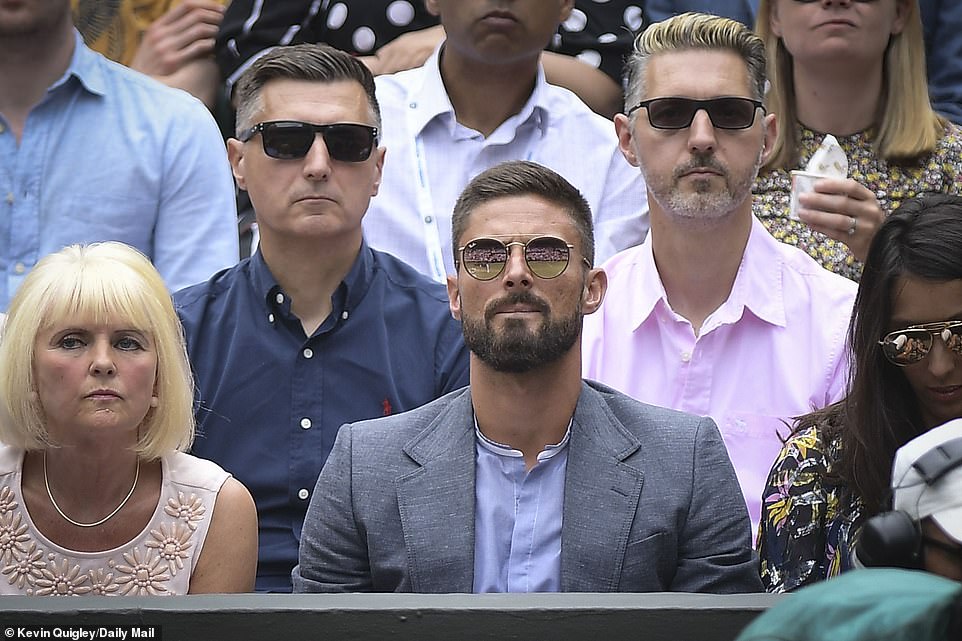 The momentum turned strangely once again when in the middle fourth Djokovic began to miss forehands by a country mile and was broken as Federer came forward and showed glorious touch at the net.

He got ahead for 5-2 with a double break and when Djokovic reversed one of those for 3-5 it was the first time he had actually had a break point.

Federer closed it out and went off for a supposed toilet break, probably aware that he could have won all four and that Djokovic had won all three five setters between the two in the past.

The 37 year-old survived a major scare in the fourth game when two netcords went against him and he needed to serve his way out of trouble from 15-40, saving three break points in all to keep things level. 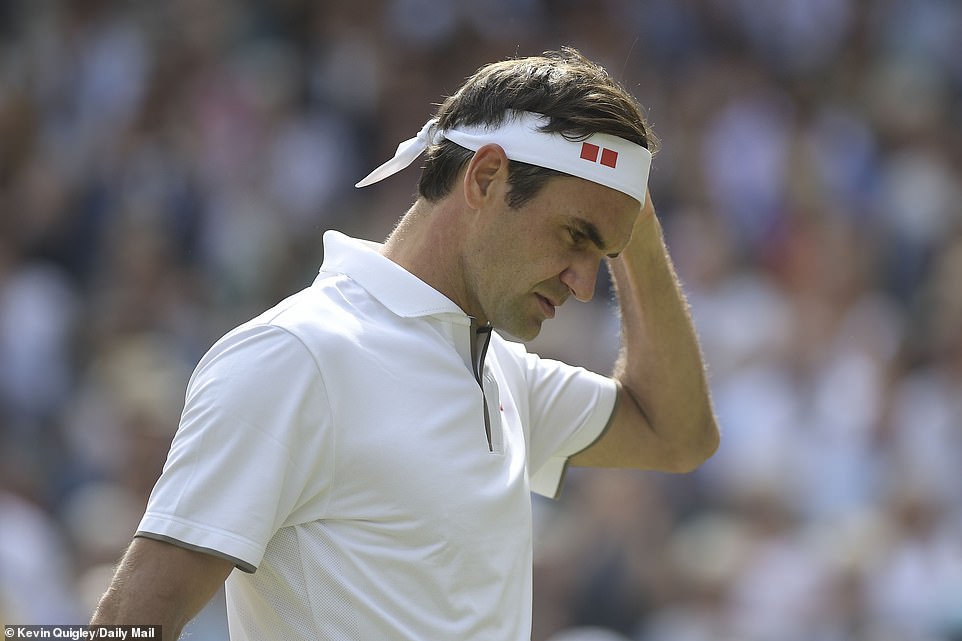 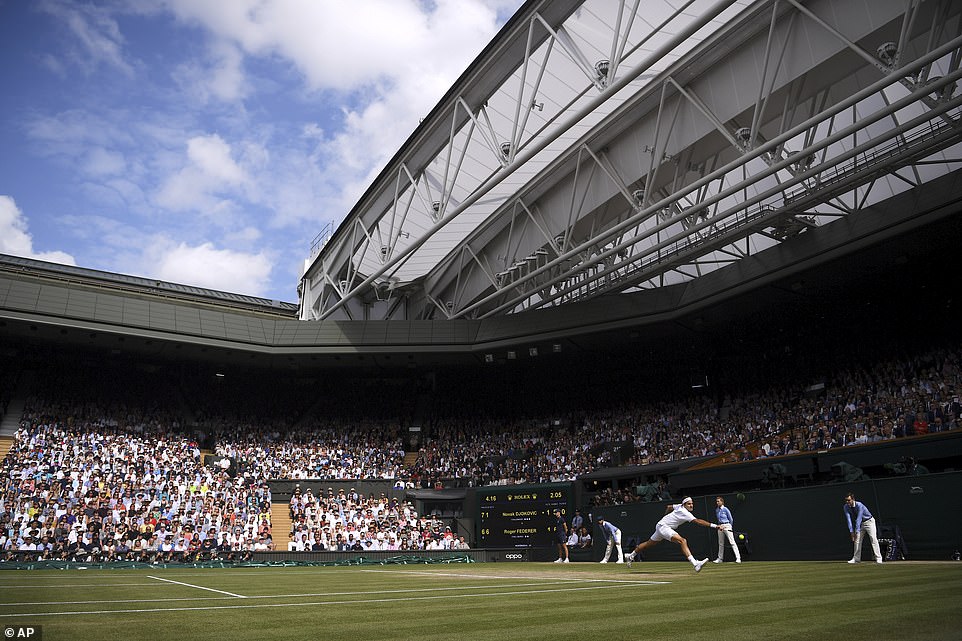 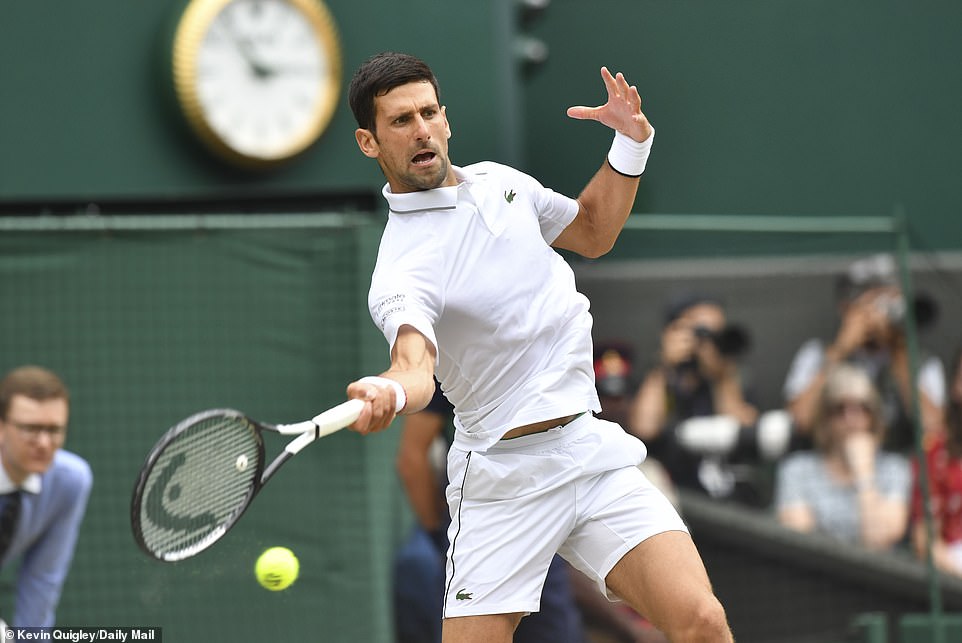 Djokovic rebounded and after a tie break, in which momentum swung both ways, he managed to take the third set

He could not do that a second time when Djokovic forced two more at 3-2. The first went begging but then the 32 year-old Serb ripped a backhand cross court that flew past Federer as he advanced to the net.

That was followed by a choky seventh game from the Serb that saw him double fault for an eighth time and then overhit a forehand on the second break point.

The crowd were chanting Federer’s name at the changeover but Djokovic hung on for 5-4 despite being tested by two exquisite drop shots.

Federer walked the tiebreak when it came to deuce on his serve at 5-6 but his opponent could not resist the forehand drives that extricated him from danger. 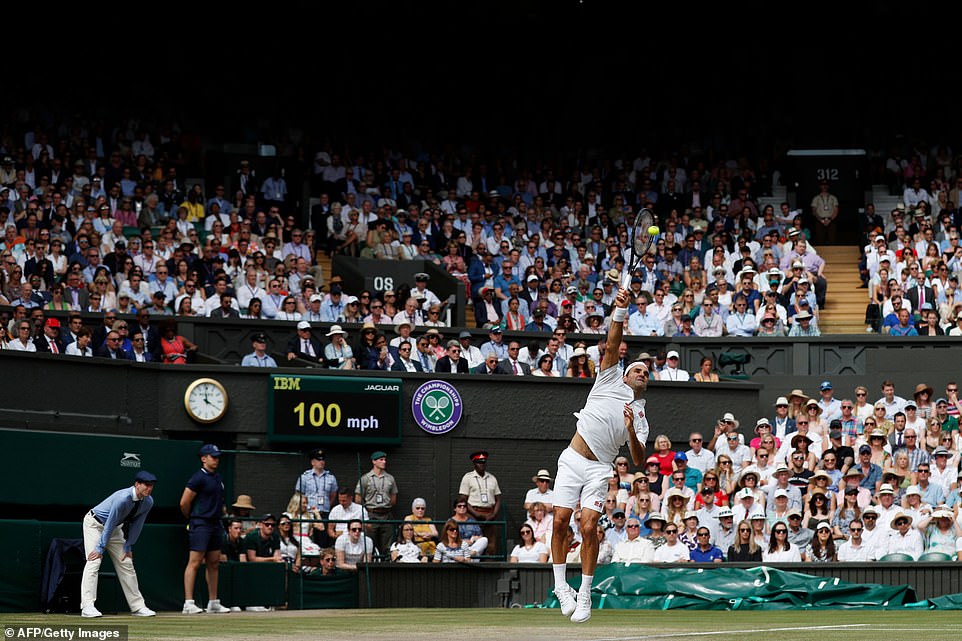 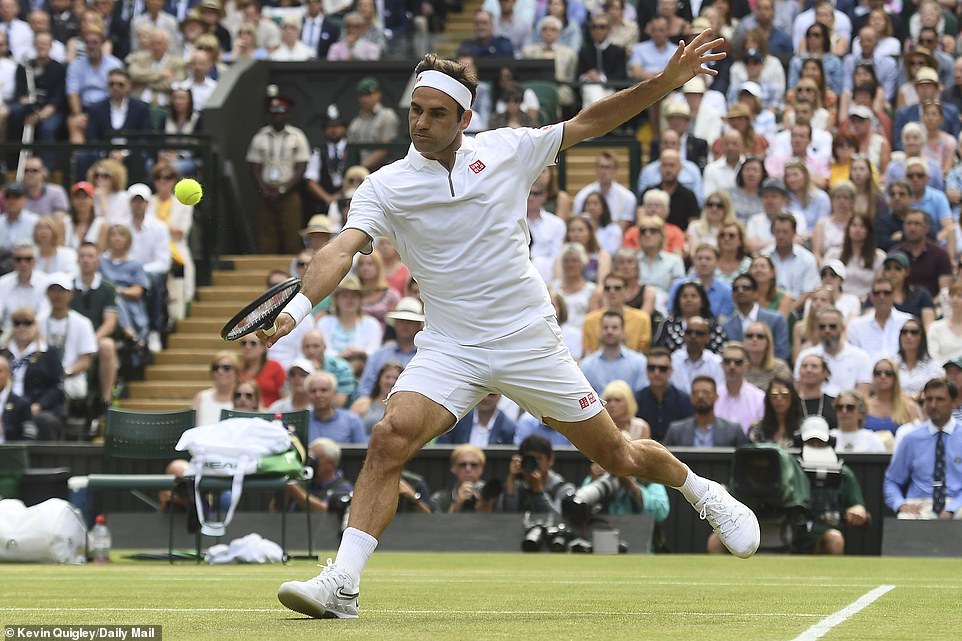 He managed to emerge victorious in the fourth set and bring the match back level, setting up a thrilling final set at Wimbledon

At 7-7 it was the Djokovic forehand that let him down as his arm straightened up and he pushed wide into the tramline. On the next point Federer defended and then unleashed a cross court forehand winner to give him the break.

Two match points were created by thumping serves but Djokovic kept the ball deep and Federer pushed his forehand wide. Then came a searing cross court forehand pass to save number two and on the next two points Federer was pushed deep into the corners and was helpless.

There was a run of seven points for Djokovic but neither player could force the door open as a tiebreak loomed at 10-10.

At 11-11 Federer recovered from 0-40 and hit an in-out forehand that landed on the line to give a break point that Djokovic saved with solid defence as the tension threatened to asphyxiate the old arena. An almost identikit situation arose two points later when Hawkeye intervened again to give a second break opportunity which was saved through an ugly overhead winner.

Federer increasingly serve and volleyed to take it into the historic tiebreak. 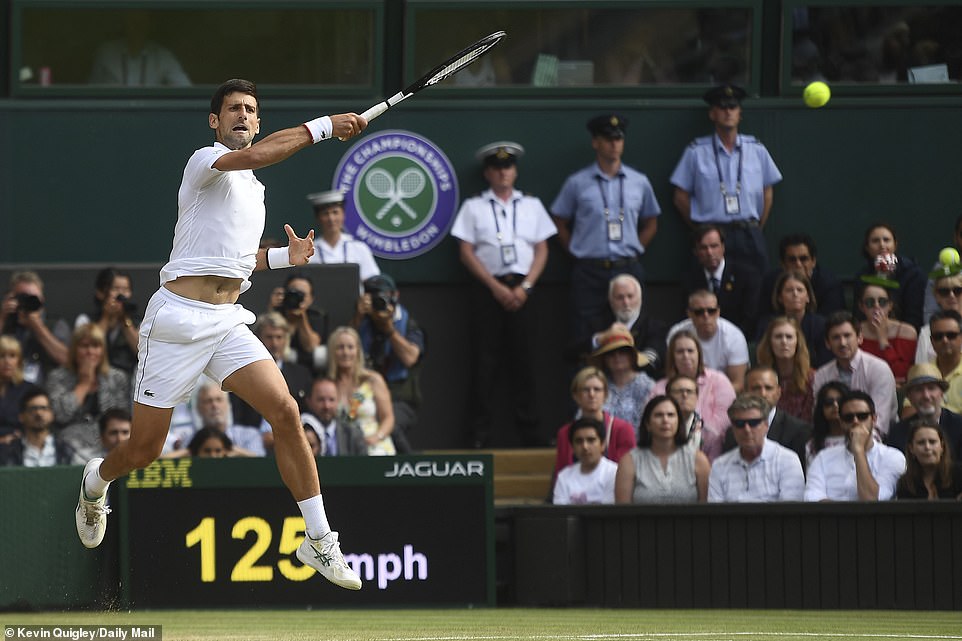