What is the answer to ‘Winner-takes-all politics’? 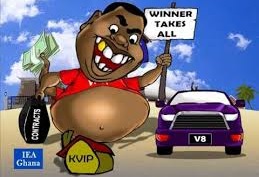 It is the practice in Ghana to give all public or official posts to members of the party which wins. Many intelligent and concerned Ghanaians are against the practice and there are serious calls to end the system and give some posts to deserving non-party members who can better promote the national interest.

I think it is wrong to give all official posts to party members whether competent or not. What I am strongly against is the term used to describe the system, namely “Winner Takes All”. A party wins an election alright, but the win is not like that of a lottery where chance selects the winner who takes all the money. We should completely reject any semblance of an election to a lotto. Political elections are serious undertakings of responsibility. Parties promise to do what is in their manifesto to improve the economic and social conditions of the people.

The winning party has a solemn obligation to fulfil. It has to harness the resources of the country to improve life for all. But the harnessing is not sufficient. Indeed, only competent citizens can harness the resources successfully. Moreover, only persons with the requisite knowledge can translate the harnessed resources into infrastructure, goods and services for the people.

Therefore winning an election is an opportunity for service. It is not a win “to chop”. Therefore what we should ask the successful party to do is to approach the competent citizen to assist to improve life for all Ghanaians. Those who oppose the “winner-takes-all” practice unwittingly suggest that the other party should “chop” a little so that they may not be so bitter.

And why should one look for the competent beyond the winning party? The simple truth is that we do not have enough knowledgeable and competent people in all fields of development. We live in a complicated world and we cannot ignore talents who do not sing our tune. Kwame Nkrumah remarked to a handful of us while following events in parliament that the opposition candidates performed better than the Convention People’s Party (CPP) members. He therefore suggested that certain individuals who were present should represent particular constituencies. I did not and do not see anything wrong with the idea. In Britain, party representatives do not normally hail from the constituency. In our wisdom, however, we changed the practice and insisted on certain residential qualifications.

Nkrumah also realised that for the rapid development he undertook he needed all talents irrespective of party affiliation.  Those selected, however, should be particularly competent and should believe in the end results of policy, he said.

I was reminded of this when I asked him why he embarked on a one-party state and courted strong opposition in Ghana, Europe and America when he had two-thirds majority in parliament and could pass any law. His reply was that the party hierarchy rejected his appointment of very competent and experienced people for important projects because they were members of the opposition (talk of Nkrumah being a dictator!)

His answer to this inhibition was to turn the country into a one-party state so that the knowledgeable and competent could assist with important development work. Party affiliation would be irrelevant in a one-party state, he said.

The present situation cannot be resolved by a one-party system even if that was feasible. We have to be sensible enough to realise that we need all qualified and competent men and women on deck if we are to meet the legitimate expectations of the people. I believe that such an approach can be assisted if a means is evolved for the state to at least partially fund political parties. At present those who fund political parties exercise so much power over the parties. Party funding should aim at reducing the power of party bankrollers.

Those were the days when people such as Paa Grant and the “Verandah boys” assisted the party through monetary contributions and services. Today the money to run the party comes from a few people who state their terms.

When I formed the Social Democratic Party, many influential personalities approached me to join or simply become members. But their hefty contributions carried a condition that they obtained certain positions in the party or in the state if the party won the election.

The CPP tried to resolve the problem by asking those who won contracts to pay 10 per cent of their earnings to the party.  At first the system was efficiently run. Later, however, corruption set in. In my view we have not found a satisfactory way of funding political parties. But if true democracy is to survive we should find a Ghanaian way of funding political parties while driving home the idea that winning an election is not the gateway to a bonanza of loot to be shared. Winning an election is an opportunity for service to rid the country of unnecessary problems and to promote the well-being of its citizens. And the winner has the right and duty to employ all qualified citizens especially those with special attributes in the exciting and rewarding task of building the Ghana of freedom, confidence and hope.