We need more town hall meetings on the elections 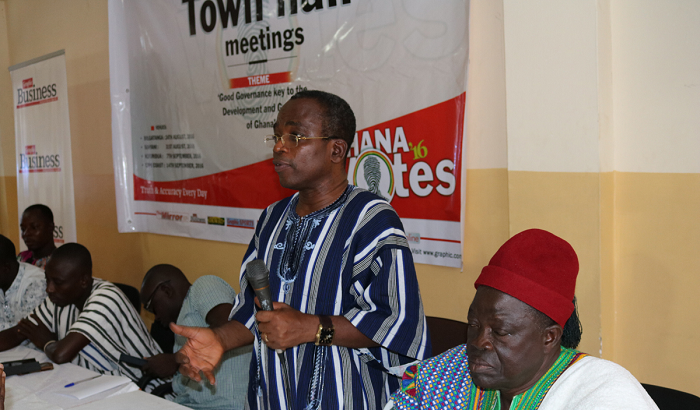 We live in difficult times of stress and poverty.  We can only overcome the problems which confront us by taking our destiny into our own hands.  Fortunately, we have the opportunity to decide on those who should take us through the quagmire of despair.

We shall shortly elect those who will lead us and enlighten the path we tread.  We choose aright and the future would soon be bright.  But ignorance beclouds our choice and false flashes of light and hope mislead us.

We need intelligent discussion of the problems which assail us.  Unfortunately, many of those who want to lead us to the green pastures are not always knowledgeable and sincere.  They often exploit the ignorance of the masses.  The Daily Graphic should therefore be congratulated for the Town Hall meetings which discuss some of the major issues which promote unnecessary misery.  It is to be hoped that the truth will be disseminated to the benefit of the ignorant and voluble.  Too many are ignorant of the fact that “government” money is their money and it is their money which is now and again wasted and looted.

Despite the admirable educational plans at independence, some 40 per cent  of our people are illiterate today.  You may produce statistics to show that the literacy rate is 90 per cent .  But simple surveys and observation confirm that the illiteracy rate is uncomfortably high.

Understanding of governance and development issues is, therefore, low.  I hope however that the Town Hall meetings do not dwell much on the intricate systems of government and high finance.  I would advise that every such meeting starts with simple discussions about the source of government finances and the involvement of the people in revenue generation.  I believe that if the people know that “government money” is their money, they will react more meaningfully when their representatives and high officials misappropriate government funds.

I myself found the ignorance of the people incredible.  A JSS graduate was around when I complained that the ignorance about “government” money was appalling.  The young JSS graduate was asked how government got money for the construction of schools, hospitals, roads and the like.  She said “from the Bank of Ghana”.  I asked how the Bank of Ghana obtained the money.  She said “They cut it”.  I had to explain how she paid an indirect tax through customs duty when she bought the cloth from which her blouse was made.  She had heard of customs duty but did not know who eventually paid it.  It was the same with Income Tax.  Perhaps, not surprisingly, she knew about Value Added Tax.

The knowledge of the young girl was not different from what I had learnt from 25 to 40-year-olds.  I thought she would learn by the time she reached voting age in three years’ time.  But how would she? We have to take every opportunity to let the people know that those who are corrupt steal from them and politicians who promise the moon are mostly confidence tricksters who make them poor.

You will not believe it but once I interviewed some 10 young men of between 20 and 50.  Eight of them said we get our money for development from the Americans and Europeans.  We discussed government revenue and I tried to disabuse their minds of false notions.  But I could not help feeling that our inferiority complex will persist for a long time so long as such beliefs are entertained.  Moreover, we would not realise that we have to work to improve life.

The Graphic Town Hall and similar meetings can do a lot if they can make Ghanaians realise that it is only by their own efforts that they can get out of the rot.  Ghanaians should know that they have to contribute directly or indirectly for their own development.  They should be made to distrust politicians who promise the moon simply by voting for them.

Election time should provide the opportunity for the exposure of the peddlers of untruths and the resurgence of self-confidence and pride.