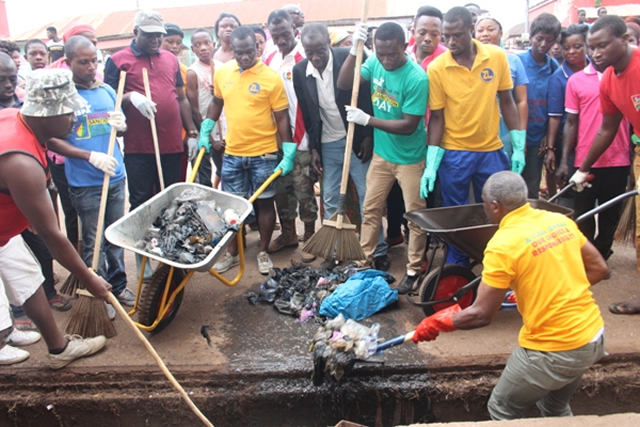 As it has been stated emphatically, cleanliness is next to godliness, meaning that those who have any ambitions of going to heaven must know that they have to be clean always because those who are dirty will have no place in heaven.

As he promised, the campaign is not going to be a nine days’ wonder as most programmes become stillborn and in local parlance, “ehuru a ebedwo,” to wit it will cool after boiling.

On countless occasions, we have embarked on programmes and projects with immeasurable benefits which have not been thoroughly carried out because somewhere along the line, the enthusiasm with which they were launched was not maintained and it lost steam.

The National Sanitation Campaign is one programme that requires the support of every Ghanaian. It is not one of the political decisions that some have to sit back and say, “ye ma yen nhwe”-do it and let’s see-and for which the only contribution from many is baseless criticism.

It is not that criticism in itself is evil but what the critics say. For as Thomas Carlyle has said, “Fear of criticism is the kiss of death in the courtship of achievement.”

But the opposite is what Elizabeth Harrison insists upon that, “ Those who are lifting the world upward and onward are those who encourage more than criticise” and resonated by Frank A Clarke who points out that, “Criticism, like rain, must be gentle enough to nourish a man’s growth without destroying his roots.”

In communication, it is said that when you arouse the aspirations or expectations of people without providing them the means to realise set objectives, the concomitant is frustration. It is thus healthy that the campaign is not mere rhetoric but functional to enable us to collectively come together to fight the canker of insanitary environments.

As Mahatma Gandhi has noted, “by our bad habits, we spoil our sacred river banks and furnish excellent breeding grounds for flies with the result that the very flies which, through our criminal negligence settle upon uncovered night soil, defile our bodies after we have bathed.”

As the prologue sets out, if we make the effort, it would not take much from us in maintaining good sanitation practices. If we are determined, we can effectively and efficiently manage our environment to serve the public good.

We have in the past embarked upon sanitation programmes that did not achieve the expected desires because we did not provide the full complements to make the programmes functional.

The  monthly clean-up exercises introduced by the immediate past government and which have been carried over under the current administration, failed in part because sometimes the waste that was gathered is never cleared and, therefore, whenever it rained, the debris went back to settle.

We should not let the new programme go the same way. Thus my appeal to our journalists and media institutions is that we have to consciously use our skills to report and analyse issues of sanitation and waste management to help advance social change and development.

We need to critically examine and evaluate the impact of sanitation on the process of development. We have to report in ways as to enhance understanding and appreciation of the issues and processes.

The public must be adequately informed and made to appreciate their own roles in the processes and how events and issues could affect them.

It is gratifying to note that as a first step, environmental Marshalls are to be appointed for every public office. In recent times, there have been agitations from trained environmental officers about the fact that they are unemployed and thus unable to put into practice what they have been trained for.

The National Sanitation Campaign offers an opportunity for these skilled officers to be employed to serve their motherland.

All that I am trying to suggest is that the time has come to redeem ourselves from some of the sordid things we do to debase our dignities, such as openly disposing of liquid and solid waste in our major markets without a sense of shame.

As Gandhi has noted, those who do not properly manage their waste deserve to be disowned even if they live in forests.