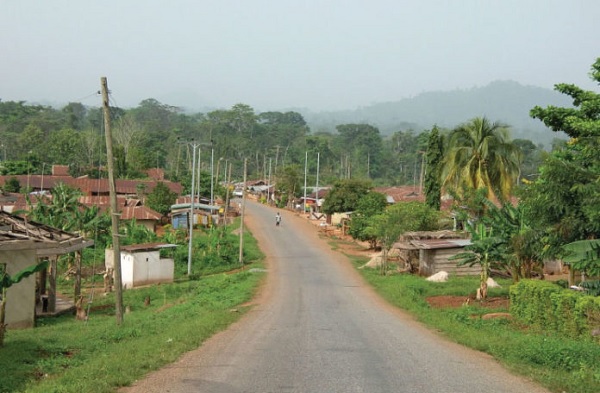 Every Day, thousands of Ghanaians use the Ako Adjei Interchange located between Ring Road Central and Independence Avenue with links towards the 37 Military Hospital and the Police Headquarters.

But who is this man and why has such a great edifice been named after him?

Well, he is a political figure.

He was a member of the Big Six of Gold Coast politics who was instrumental in the struggle for Ghana's independence from the British.

He was also Ghana's first minister of Foreign Affairs.

If you turn the back of a cedi note, Ako Adjei’s portrait is among the pack.

But that is just the tip of today’s story.

No, it wasn’t named after him.

Now wait for the twist.

Adjeikrom is not in Accra but in the deep cocoa forest of Akim.

So how does a Ga man’s exploits earn him the right to a whole community in the Eastern Region?

Samuel Adjei travelled to Congo and Senegal and returned to Ghana in 1907.

He decided to take up farming in the rural areas.

He began a trading enterprise at Somanya in the Eastern Region selling rum, tobacco and sugar.

Whilst there, he made friends with natives of Akyem Abuakwa and soon fell in love with the area.

He requested for land to farm on a large scale.

In 1908, he bought the 1,800-acre land of Adjeikrom and began cultivating plantain, cocoyam and cassava.

He later added cocoa to his farm.

As it turned out, it was the cocoa farm which became the most successful.

It so flourished that Adjeikrom soon became a cocoa-buying point for the neighbouring villages.

This farming village lies just north of Bososo on the road to Begoro in the Eastern Region of Ghana.

It is located in the Benkum Division of the Akyem Abuakwa Traditional Area.

It is a very rare independent community within Akim land.

It must be noted that the inhabitants of the village are Ga and Krobo.

The villagers working the land today are second and third generation of the original farm workers.

The stock of the original cocoa farms started almost 100 years ago is still evident, though most of these trees need replacement.

He since maintained connections with the place until he died in 2002.

Indeed, Adjeikrom is of political significance not only because it is the birthplace of one of Ghana’s freedom fighters.

The place is also important because of the political deliberations that took place there.

In those crucial countdowns towards Ghana’s independence, the first President, Dr Kwame Nkrumah, used to go to that village.

With Ako Adjei and others, Dr Nkrumah strategised the Nationalist struggle. How their paths crossed?

Dr Nkrumah and Dr Ako Adjei were both colleagues at Lincoln University in America and it was actually Ako Adjei who introduced Nkrumah to Ghanaian politics.

The probability was that a number of the strategies to wrestle Ghana’s independence from Great Britain were adopted by the stream, under a cola tree or in the family house courtyard in this rural cocoa village.

When you visit, the villagers are too willing to show you these ‘‘Adjeikrom boardrooms’’.

The town itself is picturesque in terms of tourism beauty.

The dramatic incline of the Kwahu Escarpment, the sheer abundance of moist tropical foliage and the combination of forest trees with cocoa farms make for a spectacular landscape which visitors enjoy.

The farming village lies at the heart of the traditional cocoa-growing area of the nation and is close to the Cocoa Research Institute of Ghana (CRIG).

Visitors to Adjeikrom have the opportunity to tour rural cocoa farms and learn how cocoa is grown, maintained, harvested, fermented and dried.

Because Bunso Arboretum is nearby (10 minutes drive), butterflies abound and the area is home to small antelopes, various rodents and a range of bird species.

It is a veritable tropical paradise that offers hiking, bird watching, mountain biking and walking opportunities.

This natural environment provides a lovely backdrop to the rural communities.

Hiking through a village farm early in the morning to the Kwahu Escarpment offers a unique mountain freshness and unforgettable moment, particularly when one makes it to the edge of a cliff which overhangs the village.

One enjoys a clear view of the whole of Adjeikrom town, Begoro and suburbs of Koforidua.

The two-hour hike is refreshing and offers a welcome coolness.

For recreation, folklore entertainment is available at Adjeikrom.

The indigenous “Ojeleje” cultural performance could keep visitors awake until the following morning; song after song and dance after dance.