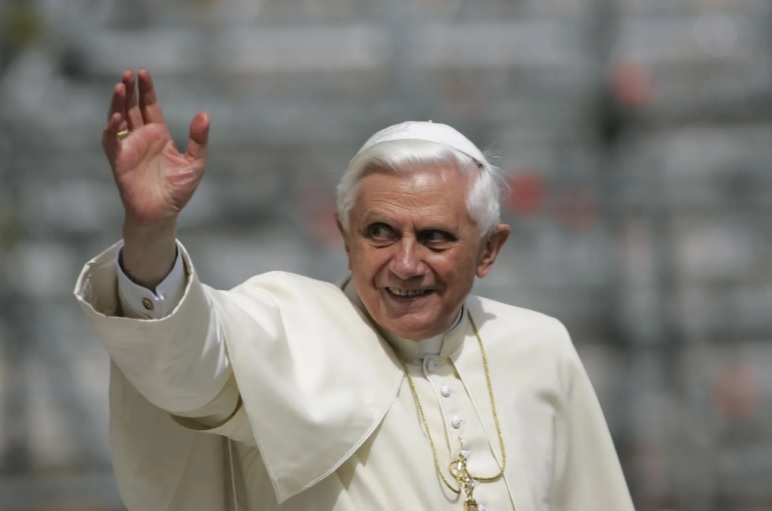 “At the papal conclave (to elect Pope John Paul II’s successor), ‘It was, if not Ratzinger, who?’ And as they came to know him, the question became, ‘Why not Ratzinger?” - Laurie Goodstein and Elisabetta Povoledo (New York Times)

As the world and, especially its 1.3 billion Catholic faithful, mourn and lay late Pope Emeritus Benedict XVI to eternal rest, I pay this tribute to the memory of a Supreme Pontiff whose soft-spoken disposition and inclination to beauty in his personal carriage and ceremonial presentation earned him the accolade "the pope of aesthetics".

Joseph Aloisius Ratzinger’s attributes of finesse in form, appeared to naturally contrast and yet complement the strong substance of his theological stance on certain contentious global socio-moral issues.

It was a conservatism that characterised his pontificate with refreshing sincerity and near-perfect integrity, as did his status as the first Successor to St Peter in six centuries to resign from the Holy See, since Gregory XII in 1415. At the age of 85 years and 318 days on the effective date of the retirement, Benedict XVI was the fourth-oldest person to hold the office of a pope.

In April 2005, while Prefect of the Congregation for the Doctrine of the Faith, and looking forward to retiring to a dedicated life of writing books in his house in the Bavarian village of Pentling, Cardinal Ratzinger was identified as one of the 100 most influential people in the world by Time magazine.

But the retirement was not to be. Because, on April19, 2005, after just four ballots cast on the second day of the conclave to find a successor to the Great Pope John Paul II, Joseph Aloisius Ratzinger was elected the 265th Head of the Roman Catholic. Cardinal Cormac Murphy-O'Connor, then Archbishop of Westminster and President to the Catholic Bishops’ Conference of England and Wales, recalled “vividly the then [78-year-old] Ratzinger sitting on the edge of his chair."

The newly-elected Pontiff had hoped to retire peacefully and said that "At a certain point, I prayed to God, 'Please, don't do this to me'...Evidently, this time He didn't listen to me." Indeed, “Man proposes, God disposes”; and in the end, we are only instruments in His hands to fulfil His purposes and His plans.

At the Central Balcony of the Vatican on that day, Benedict's first words to the crowd, given in Italian before he gave the traditional Urbi et Orbi (“To the City and the World”) blessing in Latin, were memorable:

“Dear brothers and sisters, after the great Pope John Paul II, the Cardinals have elected me, a simple, humble labourer in the vineyard of the Lord. The fact that the Lord knows how to work and to act even with insufficient instruments comforts me, and above all I entrust myself to your prayers. In the joy of the Risen Lord, confident of his unfailing help, let us move forward. The Lord will help us, and Mary, His Most Holy Mother, will be on our side.”

Through my respect of the prescriptions of one of the foundational tenets of the Catholic faith, that of the Sacrament of Holy Matrimony, based on the Genesis 2:24-model, as the Church has promoted since its inception, I earned the commendation of one of the greatest theologians of the 20th Century.

On that memorable day in 2011, at the Bishop’s Residence in Wa, Most Rev. Bishop Emeritus Dr Paul Bemile – then Bishop of the Wa Diocese – communicated Pope Benedict XVI’s message – of nomination of me for the award of the Pontifical Equestrian Order of St. Gregory the Great. My response startled Bishop Bemile. Most Rev. Bemile exclaimed his admiration for the candid, forthright, honest and truthful revelation of my infidelity and the position I had taken by respectfully declining the Pope’s nomination for the award. I did that as a matter of fidelity to the church’s teaching and requirement of monogamy for accessibility to its full complement of rights and privileges, because I had then married a second wife.
Bishop Bemile indicated that he would convey my decision to the Pope and make representations to him for a possible Civil Award in acknowledgement of my sense of integrity and contribution to the Church, in lieu of the Knighthood I had allowed to pass, as a matter of principle. The Pope had earlier sent to me an award of a gold-plated medal of Pro Ecclesia et Pontifice.
The Knighthood of the Order of St. Gregory is one of the five orders of knighthood of the Holy See. It was established in September 1831 by Pope Gregory XVI, seven months after his election as Pope. The honour is bestowed upon Catholic men and women (and certain notable non-Catholics) in recognition of their personal service to the Holy See, and the examples they set in their communities and their countries (Credit: Wikipedia).

The inaugural brief on the Knighthood Order states, in part, that “gentlemen of proven loyalty to the Holy See who, by reason of their nobility of birth and the renown of their deeds or the degree of their munificence, are deemed worthy to be honoured by a public expression of esteem on the part of the Holy See.”
My lifelong involvement and support of the church’s evangelisation and its projects, programmes, and workers in the Nadowli Kaleo District, and the country, through years of service and work as a lawyer, politician, and public officer in Ghana and the global community as a whole, would have provided the substance for the nomination for the Papal award by Pope Benedict.

Benedict's election as Pope occurred in the 2005 papal conclave that followed the death of Pope John Paul II. Ordained as a priest in 1951 in his native Bavaria, Germany, Ratzinger embarked on an academic career and established himself as a highly regarded Theologian by the late 1950s. He was appointed a full professor in 1958 at the age of 31.

After a long career as a professor of Theology at several German universities, he was appointed Archbishop of Munich and Freising and created a cardinal by Pope Paul VI in 1977, an unusual promotion for someone with little pastoral experience. In 1981, he was appointed Prefect of the Congregation for the Doctrine of the Faith, one of the most important dicasteries of the Roman Curia. From 2002 until he was elected pope, he was also Dean of the College of Cardinals. Before becoming pope, he was "a major figure on the Vatican stage for a quarter of a century”, according to him an influence "second to none when it came to setting church priorities and directions" as one of John Paul II's closest confidants.

It was said that what the more outgoing and missionary Pope John II proclaimed, the cerebral and retiring Ratzinger ratified in writing. While his predecessor took his message of evangelisation on the road, making pastoral visits to 129 countries, including Ghana (in 1980) and 37 other sub-Saharan African countries, Pope Benedict, whose annual frequency of international trips was said to equal that of John Paul II’s, was able to make only one trip to the continent. Visiting Cameroon and Angola in 2009, he suggested quite interestingly that altering sexual behaviour was the answer to Africa's Acquired Immune Difficiency Syndrome(AIDS) crisis, and not recourse to condoms. He also urged Catholics to reach out and convert believers in sorcery, a call which resonates with the third setting of the Church’s New Evangelisation process, which entails, “evangelisation to those who do not know Jesus Christ or who have always rejected him.”

But on the continent where the direct impact of his papacy with the people may not have seemed particularly popular (reflected in the backlash on his comments during his single trip here), through the indirect evangelisation of canonisations, Benedict presided over some important elevations. The elevation of our own longtime Archbishop of Tamale, Most Rev. Peter Porkuu Dery, to the cardinalate in March 2006, set the stage for initiation of the Sainthood Cause of the illustrious Ghanaian prelate whose current title on the path to canonisation is “Servant of God”. Other sainthood processes included that of George Preca, whose canonisation is the first Maltese saint since the country's conversion to Christianity in Anno Domini( The year of our Lord,A.D.) 60 when St. Paul converted the inhabitants.

Benedict defended and reaffirmed Catholic doctrine, including teaching on topics such as birth control, homosexuality, and inter-religious dialogue. His handling of sexual abuse cases within the Church and opposition to usage of condoms in areas of high HIV transmission led to substantial criticism from public health officials, anti-AIDS activists, and victim's rights organisations.

In July 2009, Benedict published his third encyclical, Caritas in veritate (Charity in Truth), setting out the philosophical and moral foundations for human development, individually and collectively, in striving for the common good. This was the last encyclical of his papacy.

Caritas in veritate makes a case for the charitable distribution of wealth in considerable detail and discusses the environment, migration, terrorism, sexual tourism, bioethics, energy and population. The Financial Times reported that Benedict's advocacy for a fairer redistribution of wealth helped set the agenda for the 2009 July G8 summit. It was a development of especial interest to me then as Parliamentary Majority Leader of the newly-elected National Democratic Congress(NDC) government of late President John Evans Atta Mills.

In February 2022, Benedict admitted that errors were made in the treating of sexual abuse cases when he was Archbishop of Munich. According to the letter released by the Vatican, he asked forgiveness for any "grievous fault" but denied personal wrongdoing. Benedict stated: "I have had great responsibilities in the Catholic Church. All the greater is my pain for the abuses and the errors that occurred in those different places during the time of my mandate.”

At his death, prior criticism over those issues received renewed attention, from some groups of individuals who felt aggrieved over his handling of them.

Both Justin Welby, the Archbishop of Canterbury and head of the Church of England, and Patriarch Kirill of Moscow, head of the Russian Orthodox Church, expressed their condolences at Benedict XVI's death. Welby referred to the former Pope as "one of the greatest theologians of his age."

Professor of Theology at the University of Notre Dame, Australia, Prof Tracey Rowland, writing in America Magazine (The Jesuit Review), identified the crux of Ratzinger’s Theology, as being “interested in the relationship between love and truth, the historical character of revelation and the role of beauty in evangelisation.” She recalled late Cardinal Joachim Meisner, then archbishop of Cologne’s description Joseph Ratzinger – an accomplished pianist himself – as the “Mozart of Theology.”

Benedict XVI wrote 66 books, three encyclicals, and four apostolic exhortations. His first encyclical, Deus Caritas Est (“God is Love”), was said by the Vatican to be “The Key to his Pontificate”, and defined his Theology. It was a Theology which “talks about the love which God lavishes upon us and which we in turn must share with others through acts of charity.”

In her description of Pope Benedict XVI as "the pope of aesthetics", the Harvard and Stanford Universities’-trained journalist, Charlotte Allen remarked that, "He has reminded a world that looks increasingly ugly and debased that there is such a thing as the beautiful—whether it's embodied in a sonata or an altarpiece or an embroidered cope or the cut of a cassock—and that earthly beauty ultimately communicates a beauty that is beyond earthly things.”

Though marked initially by the humility of diffidence, may Joseph Aloisius Ratzinger’s willing response to God’s Call for his Papacy, serve as a reminder and inspiration to us to readily rise to the occasion of service to self, God and country. And may the inherent beauty of Benedict, finally find eternal rest in returning to the Source of All Beauty and Holiness, through Our Lord and Saviour, Jesus Christ. Amen.

The writer is the Speaker of the Parliament of Ghana