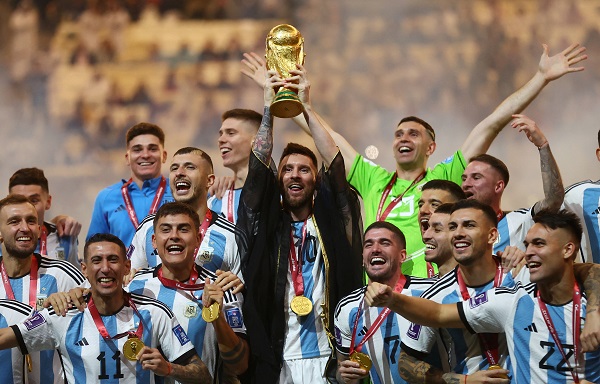 After losing their opening match 1-2 against underdogs Saudi Arabia, Argentina on 18th December 2022 went on to win the finals defeating defending champions France 4-2 in a penalty shoot-out after a 3-3 draw at the end of extra time.
30.5k Shares

Perhaps, the most enduring sporting legacy of 2022 was the World Football Cup Finals in Qatar.

After losing their opening match 1-2 against underdogs Saudi Arabia, Argentina on 18th December 2022 went on to win the finals defeating defending champions France 4-2 in a penalty shoot-out after a 3-3 draw at the end of extra time.

British commentator Peter Drury’s poetic choice of words at the end of the Argentina-France finals summed it up this way:

“Argentina are champions of the world again, at last. And the nation will tango all night long, 36 years since Maradona and Mexico. Here, finally is a nation’s new throng of immortals.

Scaloni will be feted, Messi will be sainted; France this time denied, defied. Lionel Messi this time has conquered his final peak. Lionel Messi has shaken hands with paradise. The little boy from Rosario Santa Fe has just pitched up in heaven. He climbs into a galaxy of his own.”

Qatar 2022 appears to have laid to rest the question of who football’s greatest of all times (GOAT) is, in contemporary times.

Argentina’s Lionel Messi who won the “golden-boot” award for being the best player of the tournament left no doubt in anybody’s mind that he is this generation’s GOAT of world football, joining football greats like Pele and countryman Diego Maradona.

Indeed, when asked in a recent interview on who he thought the greatest footballer was, Pele’s answer was “Messi is the greatest now!”

Some fans who did not support Argentina were happy for Messi as a person when Argentina beat France. For them, Messi leading Argentina to win the World Cup was simply what Shakespeare calls, poetic justice.

He had been through the mountains and valleys of his football career and had won every trophy except the World Cup.

Finally, he did and English commentator Peter Drury summed it up aptly as quoted above.

Many years ago as cadets, we were taught that certain subjects were not to be discussed at the Officers’ Mess. These were Politics, Religion and Sex.

The explanation was that, these were highly emotive subjects that could not be subjected to logic or objective reasoning. They were subjective and got discussed from entrenched positions with no room for compromise.

So, at the Officers Mess where drinking took place, with reasonableness and civility reduced, politics, religion and women/sex were not to be discussed. Outside the Mess however, these subjects could be discussed.

Like all Commonwealth militaries, these traditions were inherited from the British military on account of their C19th to early C20th experiences, lessons learnt and resulting distilled Best Practices!

I have no doubt that, given the emotive nature of football, if football (English Premier League, Spanish La Liga, Italian Serie A, Ghana Premier League etc) had existed at the time these rules/regulations were made in the British Army in the C19th-early C20th, it would have been added to politics, religion and sex as a non-discussable subject in the Mess. An example of the passion football can generate happened in Central America in 1969 when two nations went to war over football.

From 14-18 July 1969, two Central American countries, El Salvador and Honduras fought a four-day war in what became known as the “Football War” or the “100-hours War.”

Even though there were underlying tensions between the two countries, the immediate cause of the conflict was the three qualifying matches between El Salvador and Honduras who had topped their groups, for a single slot in the FIFA 1970 World Cup in Mexico.

Crowd violence between football fans of the two countries in the three matches on 8th, 15th and 23rd June 1969 which saw El Salvador qualify for Football World Cup 1970 provided the spark which resulted in the four-day war.

Apart from their stunning 2-1 victory over Germany, perhaps the greatest victory the Japanese made in Qatar 2022 was the lesson they taught the world by cleaning the stadium after every match even if their team did not play.

They reminded the world about the virtue of cleanliness. Isn’t there a saying that “cleanliness is next to godliness?”

In their match against Netherlands on 13th December 2022, Argentina won in a penalty shoot-out. When the goal that made Argentina the winners was scored, all the Argentine players ran to congratulate the goal-scorer Ramirez, except Messi.

For the unsung heroes of Ghana, God notices your good works!

Again, after Argentina had won the penalty shoot-out against France, a dejected and inconsolable Mbappe sat on the field, probably dazed. How could he score a hat-trick, the first since Englishman Geoff Hurst in 1966, in a World Cup final, and still lose? President Macron in a show of leadership walked to the field to console the inconsolable Mbappe.

Messi’s triumph leading Argentina to victory over France to win Qatar 2022, perhaps reinforces the saying “where there is a will, there is a way.” After four previous World Cups eluded him, Messi at his fifth attempt at age thirty-five, finally won.

It shows courage, determination and tenacity and above all humility.

Human as Messi is, at a point, under a barrage of criticism by Argentines for their team’s failure to win the world cup, Messi decided to call it quits. However, the whole nation rallied behind him, and encouraged Messi not to quit!

Ghanaians whose forte is destructive criticism only, seeing only the seamier side of life, have a lesson to learn from the Argentines. As the legendary boxing coach Angelo Dundee said, “criticism is good, but Encouragement is better!”

On Joy FM on 29th December 2022, recounting her experiences as a member of Ghana’s National Reconciliation Commission in 2002, Justice of the Supreme Court Professor Henrietta Mensa-Bonsu bemoaned the nature of the Ghanaian in not being able to speak truth to power.

She stated that, while people failed to come before the Commission, they would offload their sufferings to her at parties where she was hoping to enjoy herself. She added that, if the history of atrocities of 1979 and 1981 in which Generals were shot, and Judges murdered are not told the younger generation, sooner than later, the carnage will be repeated for lack of knowledge.

Finally from the World Cup, we must also learn from Japan’s reminder to the whole world the “cleanliness is next to godliness!”