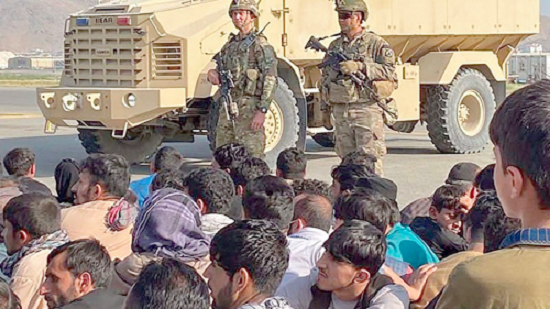 As I watched TV on the night of Sunday, August 22, 2021, exactly a week after the fall of Kabul/Afghanistan to the Taliban, an involuntary sigh “hmmm!” came out of me.

I was struck by two things; firstly, international-correspondent Lyse Doucet’s running-commentary on the fleeing/flight from Kabul airport, and secondly, comments made by former British Prime Minister, Tony Blair.

As the Prime-Minister who launched British troops in 2001 to Afghanistan in support of the US after the 9/11 bombing in the US, he angrily described the chaotic withdrawal of American troops from Afghanistan as resulting from “imbecilic” political slogans, unrealistically setting a deadline of August 31, 2021. He added, the decision for American withdrawal was “tragic, dangerous and unnecessary.”

I get fascinated listening to English spoken by the English. It is their language and they use it simply, but with maximum effect.

Part reads: “My South-East Asian Staff-Officer, a young Indonesian captain, was getting frustrated with my constant correction of memoranda he wrote for me.

We were serving with the United Nations Transitional Authority in Cambodia (UNTAC) in 1992/1993.

One day, he burst into my office saying “Sir, English is difficult….it is not logical. Why?”

For example, he did not understand why three words ending with “..ake” in the present tense, should have different endings in the past tense. He mentioned bake, take, make. While bake changes to “baked,” make becomes “made” and take becomes “took.”

Why not be logical and agree on one ending, he asked? So, if take is “took,” then make should be “mook” and bake, “book!”

For a pilot, his logic was understandable.

While I sympathised with his frustration about the apparent lack of logic in English grammar, I am intrigued by the beauty of the language, particularly when spoken by educated Englishmen/women on BBC like Prime-Minister Blair.”

A comment I read recently stated that the ease of social media had made it possible for people “to churn out” large quantities of recordings of themselves addressing the world.

Given the meaning of “churn out” as producing large quantities of something mechanically without much thought, such clips qualify to be so described.

They show cheap mass production with little thought or quality.

However, when a church proudly proclaimed that, small as they are, they have “churned out” many bishops for Ghana, that was incorrect.

Certainly, they did not mean that! The bishops they have produced are of high quality after long training regimens. They were not cheaply churned out!

Unfortunately, the expression “to churn out” has gained currency being wrongly used daily where “produced” could simply be used correctly.

For example, the church could say, they have produced many bishops, and not “churned out” many bishops!

The word “gentleman” currently is freely applied on radio/TV to thieves, armed-robbers and all manner of men with dubious character.

Certainly, an armed-robber/thief/murderer is not a gentleman!

Similarly, there is a wholesale reference to all females as “ladies.” Recently, a house-help who packed everything of her employers with the intention of driving away with the stolen items before they returned from church, was called a “lady!” No!

In recent times, every soldier in the news is referred to as a “Military Officer.” This is wrong.

In the Police Service, everybody from constable to the IGP is a “peace officer,” and is called a “police officer.”

However, in the Military, not every soldier is an officer. The Military has officers (Management) and men (Union).

Officers hold a presidential commission and range from Second-Lieutenant to General.

The men range from Private to Warrant-Officer Class One, and are not officers.

Probably, as my young Indonesian pilot told me in Cambodia, the English language might not be logical.

However, the beauty of the language is that it is rich, flexible and disciplined, ensuring that words are either correctly used or lose their meaning and create confusion.

So, while Prime Minister Blair may effectively describe the retreat from Afghanistan as the result of “imbecilic” political slogan, the English language does not call armed robbers “gentlemen.”

Neither does it allow the “churning out” of good products like bishops, nor a corporal to be called a “military officer.”

So, while politicians the world over must learn lessons from Tony Blair’s comment on the consequences of unrealistic “imbecilic” campaign slogans they feel obliged to fulfil at all cost even if it means disaster, we the people must learn to produce good outcomes and not “churn out” cheap unproductive/negative outcomes.