Coastal sand mining: The greatest threat to the coastline of Ghana

We will one day go to the beach with the intension to spend some quality time with nature. We will be surprised to find out that the wide picturesque sandy beaches that we used to walk and play on are no longer there.

They would have been replaced by ghastly looking rocky projections that are a danger to swimmers and holiday makers. The beach front tourist facilities, the castles and the museums would no longer be there. They would have been washed away by the sea.

The government would be looking for billions of dollars for sea defence projects to protect vital national assets and coastal communities.
This looks grim but that is a future we are creating for ourselves through our own actions.
If we seek to avoid this, then we must urgently take pragmatic steps to stop our actions and change attitudes that have contributed to the long-standing impacts on the coastline of Ghana.
Issues to do with the management of the coastal zone should not be handled half heartedly because the sea may not be as lenient to us as the others we have degraded.

The Scenario
We have some of the best coastlines in West Africa. As compared to our neighbouring coastal countries, Ghana has long stretches of beautiful sandy beaches that have attracted tourists all over the world for decades.

In the Central Region, coastal tourism is perceived as a major potential for job creation.
Our coastline like most coastlines the world over have been identified to be eating into land over the last few decades. This is a result of both natural and human-induced factors.

Naturally, these changes arise through the normal sea-land interaction and also through climate change and global warming leading to sea-level rise.
For the Ghanaian coastline, current research predicts that global warming and its attendant sea-level rise contributes to only a few millimetres of coastline change per year.

Hence, the annual rates of erosion of 1.13m identified for the Accra coast by Appeaning Addo and others in 2008 and 1.10m identified by Jonah and others in 2014 for the Moree, Cape Coast and Elmina area could only have resulted through human activities which have accelerated the natural causes of coastal erosion.
The implications of these trends transcend to the fishery, tourism and marine transportation sectors as well as affects the safety of coastal residents and infrastructure.

Our Actions
It has been established and accepted by coastal scientist the world over that human activities are responsible for the accelerated coastal erosion and degradation of most coastlines.
These activities include building too close to the beach, sand mining (winning) and sea defence construction. It is clear that if the first two factors are controlled, there will not be the need to undertake most sea defence projects along coastal Ghana.

• Beach Sand Mining
Sand mining occurs when people scoop sand from the beaches mainly for construction. It is ‘supposedly’ illegal. However, people have persisted in this venture dating back to the pre-independence era.

This activity has been identified to be widespread across all four coastal regions. 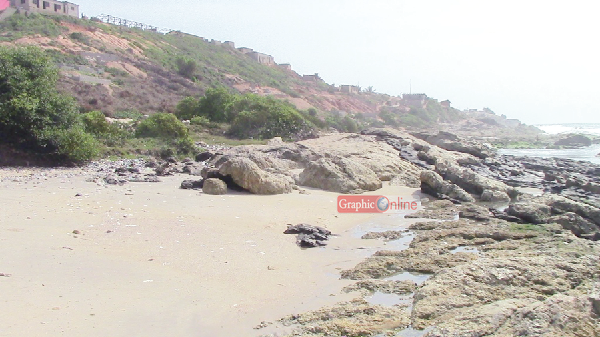 Along the Moree to Elmina stretch of coastline, almost every pocket of sandy beach is mined by commercial contractors or by groups of individuals who either pack them in bags before transporting or mould blocks on the beaches for sale.

Currently up to eight tipper truck-based sand mining sites are dotted along the 25km Moree, Cape Coast and Elmina coastline, with some of these sites recording in excess of 70 tipper truck lifting each day according to a recent study.
Coasts perform important regulatory, ecological and economic functions.

One such function is the natural protection for coastal properties against storms and the full force of the sea. When sand is taken from the coast, coastal communities, especially those in low-lying areas, are made vulnerable to flooding.

Currently, several coastal communities across the country experience the intrusion of the sea in their homes during storms and, especially, the rainy season. If we are to investigate, we will establish that most of these communities have engaged in beach sand winning in the past and sometimes continue to do so even as their homes are flooded seasonally.
In Cape Coast and its surrounding coastal communities where tourism is a major part of the local economy, sand mining has contributed to the degradation that is evident on most of the beaches.

It is often surprising, disheartening and even embarrassing to see people scooping sand on the very beaches where tourists and holiday makers are relaxing.
The coast is a dynamic system which is closely linked with the sea, rivers and coastal dunes through the exchange of sand and nutrients. This link allows the coast to maintain equilibrium even after large volumes of sand have been taken.

This natural process has been perceived by most sand winners that there is an infinite amount of sand available on the beach, since hours after they create large hollows on the beaches they become filled with sand.

Economics of Beach Sand Mining
The major reason that people give for engaging in beach sand mining is that ‘there are no jobs.’ But the activity is illegal! There are several other ventures that are illegal.

The fact that there aren’t any jobs doesn’t mean we have to engage in them.
Since, this activity is illegal and not regulated, sand contractors do not pay monies ‘officially’ to the state, while they accrue tens of millions of Ghana cedis each year.
While sand miners are making monies, beach front tourism facility owners also have to spend huge sums of their revenue for ad-hoc sea defence projects, lest they lose their entire investments.
In a conversation with an investor in the Elmina area, he described how he was drawn back to Ghana to invest in tourism. After a few years, there is a hint of disappointment in him, since a large section of the beach that drew him to the area has been destroyed through sand mining activities.

Management
Currently, every owner of a beach front facility and some coastal communities are left to undertake their own forms of coastal defence when they experience the wrath of the Atlantic Ocean. Such practices are not sustainable, since the measures which are usually undertaken do not agree with the wider coastal geomorphology and tend to exacerbate the situation.
At these current rates of coastline erosion and activities of sand miners, several more communities are going to be made more vulnerable to flooding in the years to come.

The central government will then be called upon to salvage the situation. It just does not make practical and economic sense to spend huge amounts of monies on coastal defence projects without eliminating the major human factors that cause them.
There is the need for more concerted efforts by all stakeholders; including community members and leaders, local assemblies, the EPA, the Ghana Police Service, etc. Currently, the EPA and the Ghana Police Service have not been able to collaborate effectively to deal with this serious national issue. 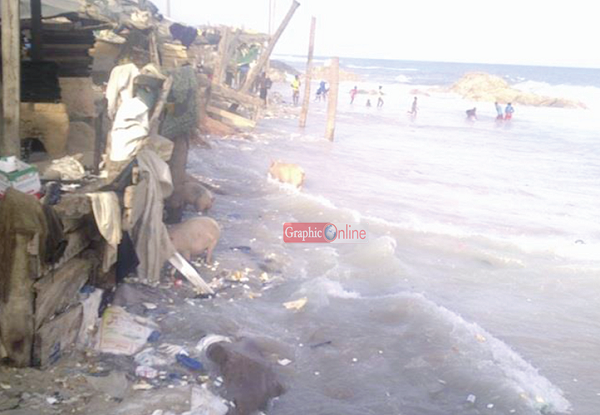 I often wonder what it takes to arrest and prosecute these environmental offenders? These people operate in our towns; they pass through police checkpoints. They undertake these activities mostly in broad daylight.
The excuse of under capacity and lack of equipment does not suffice here. Why can’t we arrest some of these contractors and offenders, prosecute them, sell their trucks and punish them with some community service (let them clean the beaches)? These will obviously serve as a deterrent.

The way forward
It baffles me when I hear our leaders lament the state of our environment. We know the right things that must be done to ensure our environmental sustainability. We only have to be brave to enforce them.

Those countries with clean cities and beaches have gotten to that stage through sound policies, enforcing environmental regulations and diligence. We can never get to that stage through cutting corners.
It is time to develop a new consciousness and approach to our environments. We must not sit idle and wait for the doomsday before we act. As Ghanaians, we should be responsible for our environments and ensure that the next generation, whom we have borrowed the resources of Ghana from, do not come only to clean up our mess.
When that day comes where our beaches will be no more; when the country will be saddled with looking for resources to protect coastal assets, all of us Ghanaians will bear those costs. Therefore, why not speak up now and ensure the right thing is done?
Let’s think and act Green!

The writer is Director of Projects
Seafront Environmental
This email address is being protected from spambots. You need JavaScript enabled to view it.
www.seafrontenvironmental.com