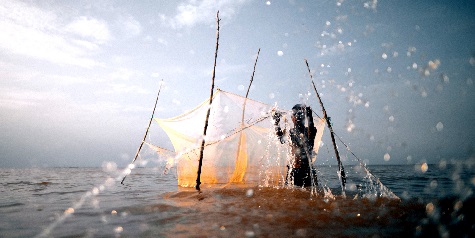 A victim of child labour disentangling a fishing net on the volta lake
30.5k Shares

Among the plethora of challenges strangling humanity on the soil of Africa, these notorious duo, without impunity, subtly crash precious souls.

Tagged modern-day slavery, human trafficking is widespread. As if ingrained, Africa has borne the brunt of the illegal trade of humans since the pre-colonial era.

Slavery undeniably dealt a heavy blow on the continent.

And until just recently, when the continent seems to be picking itself up, child labour, human trafficking and suicide seem to be pushing its people further down the abyss.

Children are trafficked and forced to engage in tedious labour in droves today, and there seems to be no end in sight.

According to a United Nations publication in May, approximately every one in four children engage in labour detrimental to their health and development in the least developed countries. 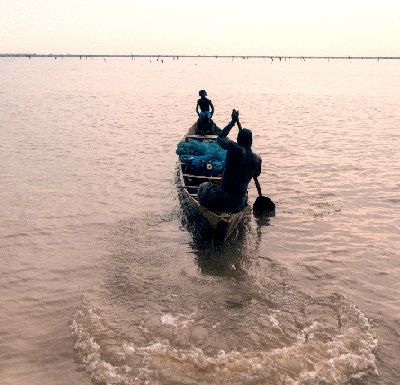 Children hawking on the busiest streets of the country are becoming an usual sight.

One is likely to spot a child working laboriously and no one questions who is responsible for him or her. 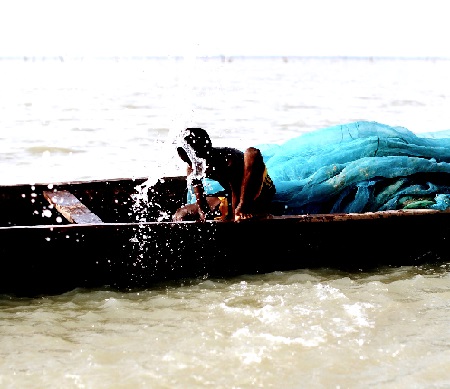 They roam the streets, hawking night and day right, scavenging for livelihood.

Children are not even supposed to beg for alms. It is unlawful, a direct affront to their rights. They are to be catered for until they are of age to care for themselves.

The Executive Director of Child Rights International (CRI), Bright Appiah, in an interview on television cautioned against giving money to children begging on the streets as it is a criminal offence.

The offence is not the empathy expressed by extending a helping hand but by encouraging the kids to continue in the illegality is what makes it an offence.

A human trafficking survivor, Lawrence Baffloe, recounted a horrifying experience where he had to hang on to dear life for a nerve-racking four-hour ordeal in a near-drowning situation.

“One day, while fishing on the lake, the boat capsized. At that moment, I knew that was my end because I was drowning. From 12 a.m. to 4 a.m., we were just floating on the lake until we were rescued by another canoe” he said.

Had it not been for the benevolence of God, the victim’s unrelenting will for survival, and his ability to swim and keep afloat, the story would have been different.

Attempted suicide is considered illegal in Ghana. Some arguments have been raised on whether or not to repeal the illegality of the act.

However, the likelihood that Ghana would ever consider decriminalising suicide soon is low.

The hypothesis drawn from this assertion is that communalism is deeply embedded in Ghana’s culture.

A popular Akan proverb is: “It takes a community to nurture a child”.

The ideology deduced from this is that, if it took a community to bring up an individual, that individual becomes a bona fide property of that community.

Hence, one’s life ultimately belongs not only to that individual, but to every Tom, Dick, and Harry. One simply cannot snuff out their life without the community’s consent.

Despite the many ethical concerns that may be raised about the illegality of suicide in Ghana, it is fair to agree that it should remain illegal as that will serve as a deterrent.

Suicide, indeed is an eerie topic to discuss. The quagmire that it poses does not only affect the victim but transcends society and all humanity.

The World Health Organisation (WHO) recently revealed that Africa has the world’s highest rate of suicide. The United Nations health agency indicated that “roughly 11 people per 100,000 per year die by suicide in African regions”

Mental health issues have been linked to the soaring rates of suicide on the continent. The WHO cited the challenge of a deficit number of psychiatrists available to treat mental health patients.

Thankfully, there seems to be some growing sensitisation and interventions being implemented to salvage the tragedy. Unfortunately, those with suicidal tendencies may also be the most jolly-looking people.

The best alternative to curb the menace of suicide is to create awareness.

A social media campaign has been launched by the WHO to lend support to 10 million people who might be afflicted with mental health challenges.

Moreover, several non-governmental organisations are sensitising the public to the consequences of child labour, human trafficking and suicide.

The Mental Health Authority (MHA), an agency of the Ministry of Health, Ghana has recently launched a 24-hour toll-free line that will support persons contemplating suicide which is 080 067 8678.

The Human Trafficking Secretariat of the Ministry of Gender, Children, and Social Protection is also helping rescue children. The helpline to call is 0800 800 800 and 0800 900 900.

With all these initiatives in place, there is the hope that suicide and child labour will be a thing of the past soon.

The writer served as a service personnel with the Daily Graphic.