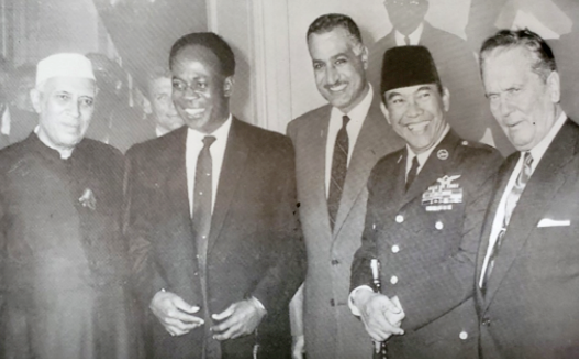 The story of Kwame Nkrumah is the substantive history of Africa emerging in the 20th century. Likewise, Nkrumah’s import pervades the 21st century as well; furthermore, his gallant vision for Africa leaps cautiously but brightly into the future!

The continent is fortunate with the prospect of standing aloft the esteemed giant’s shoulders to glean a brighter horizon.

Back in his day, and counting forwards, he continues to stand head and shoulders above the political posturers. Considering the new scrambles and sneaky designs on Africa today, if the continent is to remain for Africans, ignoring him would be at a great risk.

It’s worth noting that the first conference of independent African states was held in Accra under Nkrumah’s watch in 1958, a year after Ghana’s independence, In his book “Africa Must unite’’, 1963, he wrote: “The great millions of Africans [are] rebelling against the false belief that providence created some to be the menials of others.”

He said, “freedom is as much their inalienable right as it is of those who had set themselves over them on the pretext of bringing them christian light and civilisation.”

It’s possible that when Nkrumah set out to free black Africa against colonialism — many Europeans and Africans thought he had set himself an illusory dream bordering on puerility?

How do you set out against massive colonial military powers — like Britain and France — vested in imperial and economic activities across the huge African continent? How, for example, do you untangle the strangle holds of North and South Rhodesia and Apartheid South Africa — all massive colonies armed to the teeth, and supported wholeheartedly by Europe and U.S.?

In the Gold Coast, who could ever have believed that Nkrumah could accomplish what he had set out to do?

Nkrumah’s determination reminds me of Wayne Dyer’s book “You’ll See It When You Believe It’’. Dyer wrote: ‘’Your job as a visualiser is to learn to bring from the astral world of thought to the physical world of form’’.

He went on to say, “Believe it and you will see it … Regardless of the circumstances of your life, you are the writer, director, and producer of your mental images”.

A vision is like an imaginary picture of the world as you would deserve to see it! And the champion of that vision would need to make things happen by locking in bold energies there.

It’s like faith, but this faith is for the greater good — not a greedy solitary faith for one’s selfish interests. That’s the difference between a person with a great purpose and one with a mere fancy, the kind bordering on an infant’s facade.

In Nkrumah’s early days and beyond, he put on the defensive the religious elite, the chiefs, the opposing political class, the intelligentsia - all those benefitting from the status quo. Of course, they were in no mood to be deprived of the sober creature comforts and couldn’t wait for him to fail, or to make mistakes in order to discredit him.

Nkrumah was particularly incensed with what he called “traditional forces [that] impede progress”. In his memoirs, he loathed those adorned in royal regalia, religious lapels, three-piece suits, and medieval wigs who felt not a pinch for their deprived brothers or sisters.

He was called every unappetising name in the book including opportunist, communist, agitator — and like Mandela after him — a terrorist.

A good many African leaders and freedom fighters bandied about him there: from the Algerian nationalists in the north and Nelson Mandela’s group in apartheid South Africa; from Guinea’s Sekou Toure in the west to Abdulla Osman in Somalia in the east.

As Nkrumah once wrote, “We who have battled our way to independence [have] no illusions.”

In the hands of a collective imperial and native foes, Patrice Lumumba of the Congo was made to suffer a tortuous death. Steve Biko and countless others were beaten to death or hanged in apartheid prisons. Mau Mau fighters were hunted down from the east African hills.

With just the ember of an undying spirit, Nkrumah’s determination was boundless. One may choose to like or hate him, but the way to his personal transformation must be a case study for Africa’s youth today!

And it is a major pity, a setback, that the Flagstaff House — the premise of the very heartbeat of Africa’s freedom — was demolished, and not kept to preserve that aspect of Ghana’s and Africa’s history.

Nkrumah’s literary output was remarkable. There’s a tendency to focus on one, his visionary beginnings and the struggle for independence of African nations, and two, his majestic appearances on the world stage — especially his influences at the United Nations and Non-Aligned Nations, as the indomitable African voice. But what is clearly forgotten is the prolific writing.

Among his numerous books were the following: Ghana – The Autobiography of Kwame Nkrumah; Africa Must Unite; Neo-Colonialism: The last stage of imperialism; Consciencism; Handbook of Revolutionary Warfare; Class Struggle in Africa; Voice from Conakry; Dark Days in Ghana; I Speak of Freedom; The Struggle Continues; Axioms of Kwame Nkrumah; Rhodesia File; Towards Colonial Freedom – Africa in the Struggle Against World Imperialism; Kwame Nkrumah – Revolutionary Path; Challenge of the Congo.

His whole life was consumed with a burning fervour to develop the African consciousness, to elevate the African personality on the world stage. His purposeful vision lives on!