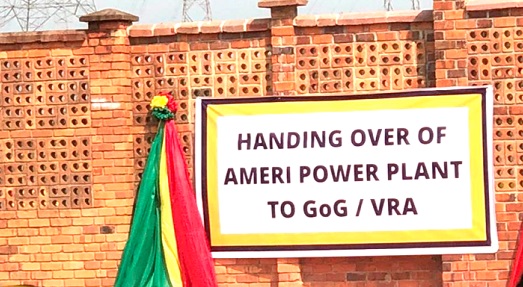 The handing over of the Ameri Plant to the GOG/VRA
30.5k Shares

One of the most heated issues in the political space under the John Mahama administration was the Ameri plant purchase by the then government sometime in 2015.

Seven years on, the plant appears to keep generating not just power but also some political heat, which has surfaced in the wake of government’s decision to relocate the plant to Anwomaso, near Kumasi in the Ashanti Region, with all manner of readings into the decision.

Perhaps it is helpful to go to town to try to unbundle this relocation issue and hopefully put the matter to rest.

As far back as 10 years ago, GRIDCo did extensive studies on the national grid and concluded that a power plant needed to be located at Kumasi. This was necessary to strengthen the grid to help solve the chronic low voltage problem in that part of the country.

In February 2015, the then government contracted Ameri, a developer to construct a plant that was named Ameri Power Plant at Aboadze.


The total sum of the contract was 510 million US Dollars, which sum generated a huge political furore, with questions about whether it was value for money.

Ameri, being a developer, contracted Metka a company owned by Mytilineos to finance, construct and run the plant for them for a period of five years. Ameri was finally paid for in six years and today Ghana owns Ameri plant.

Following this, the Government of Ghana (GoG) took the policy decision to relocate the Ameri plant to Kumasi based on the recommendations of the GRIDCo study.

The ministry, therefore, initiated the project to relocate the 250MW Ameri Power Plant from Aboadze to Kumasi to strengthen the national grid and also eliminate recent power system disturbances experienced in the northern transmission network,

A site located between the right of way of GRIDCo’s 161kV and 330kV transmission towers close to Kumasi (Anwomaso) Substation was identified for the relocation project.). The site is owned by KNUST.

In March 2021, Mytilineos S A submitted an initial budget proposal for the Engineering, Procurement and Construction (EPC) for the relocation of the Ameri Power Plant from Aboadze to Anwomaso.

Mytilineos S A is the parent company of MEKTA (EPC contractor for the construction of the Ameri Plant in Aboadze), and therefore, are conversant and have first-hand experience with the technology of the Ameri plant and its operation.

The proposal was reviewed by the joint GoG negotiation team led by the Deputy Chief Executive of VRA (Ing. Emmanuel Osafo) and made up of representatives from MoEn, VRA, GRIDCo, Energy Commission and Ministry of Finance.

Subsequent to the expiration of the agreement in January 2021, the plant was still being maintained and preserved by Metka at an average monthly cost of US$ 150,000 to the company.

VRA was unable to maintain and preserve the plant because VRA personnel were not running the plant with Metka during term of the BOOT. VRA only monitored the operations of Metka.

At the request of the Ministry, KNUST granted the GoG team (VRA & GRIDCo) access to the site for the required engineering survey and geotechnical works to continue with Front-End-Engineering activities for the project.

GRIDCo conducted the grid impact study to evaluate the overall impact of the Plant’s relocation on the stability and reliability of the Ghana Power System.

The study has been completed and confirms that the power system can accommodate a full 250MW Ameri at Anwomaso and will significantly boost system voltages especially around Kumasi and the northern sector to improve overall system stability in the country.
The report highlighted that the relocation project will reduce transmission system losses by 15 MW estimated at GHS23Million (US$4Million) per annum.

The GoG negotiation team held a series of meetings on the proposal submitted by Mytilineos before concluding the draft EPC and Operations & Maintenance (O&M) Agreements for the relocation project.

The negotiations were to confirm the scope of works to be executed and the schedule for the contract.

The parties agreed on requirements for decommissioning, dismantling, preservation, transportation, installation, testing and commissioning of the complete system using the same equipment configuration and concept from Aboadze.

The ministry has not yet signed any contract, and recently, the Minister for Energy, Dr Prempeh, stated in Parliament, in answer to a question on the contract sum, that it would not be appropriate to disclose the cost yet, since the contract is yet to be signed between the VRA and the EPC contractor.

As stated earlier, politics has never been particularly far from the Ameri issues, and it appears that currently, two strands are making the rounds.

First is the claim, made in NDC circles, that the plant has become the stone that the builders rejected, but which in turn become the cornerstone.

In other words, the NPP railed against the deal back in opposition, and yet, today, in government, they have found it expedient not only to put it to use, but to haul it to their stronghold to stabilise the power situation there. This, they say, is a vindication of the previous administration’s decision to procure the plant.

In my view this is a stunted argument for the simple reason that anyone with a recollection of the heated discussions around the plant knows that the argument was about the $510m Ghana was paying for it and whether it represented value for money, and not the fact of the acquisition.

In any event, whatever the arguments at the time, the plant now belongs to the state, and it is only proper that if it is relevant to stabilise another part of the country, it is put to that use. That is proper and sensible governance. It would be a shame for the NPP government to throw a tantrum and treat the plant as pariah simply because it was acquired by the previous government and the party had issues with it back then.

As for the claims in some quarters that the plant is being relocated to the Ashanti Region because that is the home region of the sector Minister, Dr Matthew Opoku Prempeh, one can only describe it as preposterous.

As has been noted earlier, GRIDCo did extensive studies almost a decade ago on the national grid and concluded that a power plant needed to be located at Kumasi. Further, the policy was subject to Cabinet approval. It is simply laughable that such a major decision with significant technical implications would be made by government simply on the back of the ethnicity and home region of the incumbent minister, and those who seek to drive an ethnic agenda in this important project should be ashamed of themselves.

The ministry will continue to undertake the relocation project, ensuring value for money and obtaining all requisite and statutory approvals to achieve government’s objective of improving power supply in the middle and northern sector of the country.