The rich vein of gold and galamsey 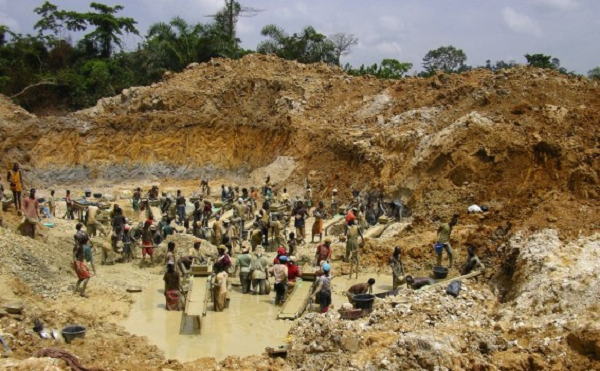 Tarkwa, the first Ghanaian gold mining town I visited, has claimed a chord of my heart and I have a story to share with my readers on every visit.

This story is usually an amalgam of puzzlement, pity and sympathy. I had read about Tarkwa as a very rich gold mining town and heard people talk about her in terms not exactly comparable to Johannesburg in South Africa. Nevertheless, Tarkwa was said to be dripping with gold. South African Night Shift Bosses who took flasks of coffee to work underground returned the next morning not with empty flasks but rich grains of gold. So I was surprised about the Tarkwa I saw in 1967.

I saw no signs of wealth except bamboo poles on top of every room to announce to the visitor that the occupant was rich enough to own a black and white TV set. This was the time the term galamsey (get am and sell am) was not coined to describe illegal surface mining which has become rampant since the mid-1970s. The hilly and uneven topography of Tarkwa presents a nightmare to the town planner. Some buildings stand at the pinnacle of heaven, some clinging grimly to the side of hills and others condemned to valley bottoms to receive drain water from uphill.

Now with the once bustling railway and supporting services shut down and mining only a skirmish compared to years past, one looks at Tarkwa with pity. Of course, the bamboo poles have been replaced with satellite dishes showing that life has not retrogressed too much. The people do not seem to be complaining. As the Kroo porters of old used to say, “Monqui no fine but ‘im people like am.”

Until recent years, Wasa Akropong did not receive any publicity, but as it is well known, the entire Wasa area is endowed with the sub-terranean stuff called gold, whose mining causes rivers to turn into brown blood that may not support life.

The Wasa Akropong chief’s palace is strategically located on a hill overlooking the main Tarkwa-Obuasi road. Less than two telegraph pole lengths of either side of the palace, the land is crudely scarred with pits, trenches and heaps of soil. Galamsey aben woha.  A young man who sounds very knowledgeable explains: The land belongs to the people. They mine the gold, level up the soil and put up buildings on the reclaimed site. Chinese businessmen snap up the building for spare parts stores. In a year or two, they buy the building outright. Indeed Mandarin is the dominant writing on storefronts here.

On our bus, there is another young man who claims he is a manufacturer of oven for bread and for recovering gold from its oxide. He seems to know the Wasa area like his palm. He says that the activity visible on the roadside is only the tail of the galamsey business.  He claims that inland, there are sizeable Chinese operations. Big living quarters, huge tracts of galamsey-devastated land worked by yellow men who operate the excavators and huge irrigation pumps are features. They have their own potable water systems and irrigation for washing the soil. “They are so many that if they were allowed to vote, they could form a complete constituency.” They work the land and do not care about land reclamation. They simply move on.”

Another community worth pitying for the galamsey scourge is Ayanfuri, but here there is a saving grace in the name of the Persus Gold Mine, a huge multinational miner. Having noticed that some villages were sitting on rich gold veins, Persus has decided to relocate the indigenes to a site which is several kilometres way. From the road, one can see the new township, yet to be completed, gleaming in the distance. The first impression one gets is another Sodom and Gomorrah in its heyday, but, at least, this one is planned. A hospital, senior high school (SHS) and potable water will be provided but why no gold refinery or jewellery industry? One can bet safely that those who graduate from SHS will take to galamsey and will be hounded by Persus for trespassing.

As we pass every community, I attempt to take note of the candidates on the billboards vying for the constituency seat in Parliament: Kwame Dzokoto, Duker, Barbara Oteng-Gyasi, Cudjoe, Kwasi Oppong-Fosu, Kwaku Boateng…The list goes on and I wonder what promises they make to the electorate about jobs. The young man who has been running most of the commentary (and who is more likely a galamseyer) winks and says confidently, “All these politicians and the chiefs are into the galamsey themselves. They can never ban it.” Then he talks again, knowledgeably about the Survey Map of Ghana. He says, “Worse things will happen in the Oppong Valley where a rare precious metal is waiting for exploitation, probably 20 years from now.”

God save our rivers and cocoa farms.