No more laughs at vetting 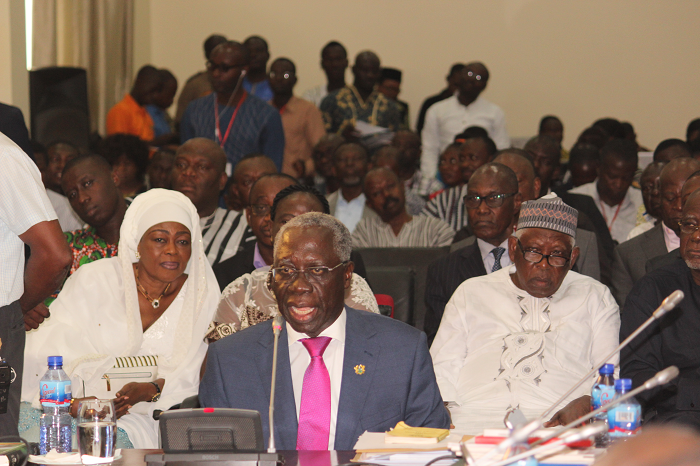 It has been 16 long years since My blog started featuring what is supposed to be an important constitutional requirement called vetting of President’s nominees in Parliament.

My observations have always been light-hearted about vetting because I consider that some relief is needed when discussing the event.

To start with the environment in the Appointments Committee room where this four-year ritual takes place, is quite stressful. The chamber brims over with human bodies during proceedings when it is packed with an embarrassingly large number of committee members, relatives and village associations of the nominee’s constituency. Besides, some of the queries and their responses are crafted so clumsily that they can provoke rage.

Vetting 2001: First two nominees to be vetted were the late Kwadwo Baah-Wiredu, Minister-designate Finance and Economic Planning and Mr Albert  Kan Dapaah, Minister -designate, Energy. One could have yawned throughout the vetting. Then the defining moment came with the hapless Mallam Issa. He was a lightweight who was being asked to punch above his weight to satisfy the all-inclusive agenda of the NPP. The man was out of his breath. Indeed, he had no clue about what his portfolio of Youth and Sports entailed. His mantra was, “Inshallah, I will consult.” One could tell right away that he was not a ministerial material. No wonder he became the only minister in the Kufuor Government to be jailed for theft. For a minister, the crime was crude and amateurish in its execution.

Vetting 2005: It was a parade of heavyweights such J.H Mensah, Old Dame Mrs Gladys Asmah and the irrepressible Edumadze. J.H Mensah proved such a handful for the committee that a young MP from Bole/Bamboi, a certain John Mahama suggested to his colleagues to let the old man go because he loved “too much talking.” For Mrs Asmah to claim that she had never heard of the Millennium Development Goals, the MP for Nadowli crafted some choice words meant for her discomfiture. Vetting 2005 also included Sheik I.C Quaye who claimed he was a banker but his certificates had been swept away by tsunami. Also included in the 2005 Group was Dr Richard Anane, Minister-designate for Roads and Highways. He had completed his watch at the Ministry of Health where certain incidents in his life, which he owned up to bravely, provided juicy gossip. It raised the question, “How personal can vetting get?”

Vetting 2009: NDC had come back to power and had paraded some Amazons before the Appointment Committee for vetting. They were self-assured, politically battle-hardened ladies namely Mrs Mould Iddrisu, Sherry Ayittey and Hanna Tetteh. They were such large shooting targets and the opposition members of the committee did not miss any shot. “I am hot.” Mrs Idrissu pleaded for some respite. It was time also for His Excellency Atta-Mills to bring into his government some rookies to cut their teeth on governance and leadership. Names such as Haruna Idrissu, Okudzeto Ablakwa and Dr Omane-Boamah who had barely graduated from NUGS politics had a torrid time at vetting. However, they did not disappoint in holding their nerves. Same could not be said of Zita Okaikoi who was being proposed for Minister of Information. She cut such a poor figure of herself.

Vetting 2013: My abiding memory is one of Nana Oye Lithur and what has been labelled on social media as “trumu-trumu business.” She has been a known defender of LGBT rights and has held stoutly to her belief.  Muntaka Mubarak asked a question: “Madam, should your son come home with a man whom he intends to marry, what would be your reaction?” At one time or another, the government would need to declare its stand on this matter of gayism.

Vetting 2017: This is becoming an inquisition. A nominee needs to have an extra-large buttocks to withstand the stress. Mr Yaw Osafo-Maafo spent four hours under interrogation. Why? The current batch of nominees are recycled stuff. They are not some unknown quantities. They have tract records they could be judged by. What is the need for the marathon questioning? Many of the questions are mere repetitions. Very irritating is the practice where political friends answer the questions for a nominee and there is heckling during proceedings. Some members have clearly extended their campaign platforms into the August House. This should not be the case.

In my view, vetting is very useful. Even in its current form, responses by nominees do give ample forewarnings of those who are not going to fly in the positions for which they are being nominated. Some ministers have been shipped around from one ministry to another. Some end up as presidential staffers. Others simply evaporate into thin air. They are the flops at vetting. We can have good laughs after the gaffes but the proceedings must not be trifled with.