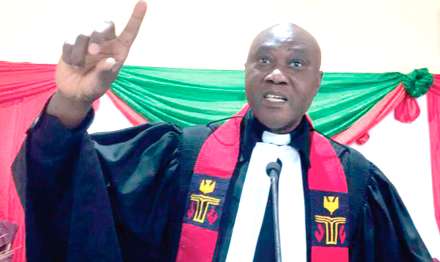 We thank God for another election period. In times like these, the expectation of all Ghanaians and well-meaning people of the world is for the polls to be peaceful during and after so that the country can continue to develop with improved standards of living for the citizens.

One critical period after election is the declaration of results and the acceptance by the competing parties. It’s a crucial period which need to be managed well because there is also the temptation for people to undermine  national peace and stability.

It is because of this that it is imperative to call the attention of all citizens, especially the youth, to guard jealously the peace by going about the electioneering activities with messages of national cohesion.

The youth are the hope of Ghana’s future so I take this opportunity to appeal to them not to allow self-seeking politicians to misdirect their energies into destructive activities which will not promote a better tomorrow for them. Our dear country Ghana is looking up to our enterprising youth to be creative and use innovative ideas for national advancement.

By the grace of God, Ghana has held successful elections since 1992 with the ushering in of the Fourth Republic on January 7, 1993.  It is no secret that during elections in any human endeavour, there will be victors and losers.

When people do not resolve the differences peacefully in elections, it creates acrimony and tension in society.  The stakes are even higher in national elections which involve the election of presidents and parliamentarians.

Thankfully, things have been managed mutually in the past 27 years of constitutional rule, with Ghana as the winner.

Ghanaians just went to the polls to elect the president and parliamentarians on December 7, 2020 and the hope of all Ghanaians, particularly my young people, is to see the outcome of the polls pass off peacefully.

Disagreements among political actors should not degenerate into violence.  After all, what use will it be if one wins an election and has to preside over citizens who are hospitalised because they sustained injuries in electoral violence.

We need not forget that in any violence children and women are vulnerable, so let’s preach tolerance in all activities in our schools and other social gatherings.

As religious leaders, we are happy to have our congregants made up of people of different political parties.

We the religious leaders are at a strategic position to appeal to the political actors and their followers to be measured in their utterances and pronouncements as they try to state their positions of disagreement.  Peace, love, fellow feeling and unity are critical ingredients that provide societal cohesion.

We are witnesses to scenes of election violence and how such unfortunate developments have eroded the democratic gains of countries.  We hope and pray such scenes will be constant reminders to Ghanaians to avoid acts and utterances that can result in violence and undermine development.

Ghana has a number of development challenges, including the worrying youth unemployment situation, so we cannot sacrifice the future of our young people in the name of political expedience.

The issue of party supporters attacking and locking public offices at the least provocation should not be encouraged in our democratic journey.  Let us know that such facilities represent our collective taxes so no group of people should think they have the right to just attack or destroy them..  The facilities are not for the political parties.

Even offices of political parties  are not seen as party property when they come under attack. This is why the national security agencies, especially the police, take keen interest in such matters because of the criminal nature, how much more state facilities?

I urge political leaders to denounce their supporters who perpetrate such dastardly acts.

We should promote exchange of ideas.  Winners and losers in elections should know that they are two sides of the same coin, because constructive criticism is healthy for national discourse to accelerate progress and development of our dear country Ghana.

The writer is the National Director of Evangelism of the E.P.Church, Ghana