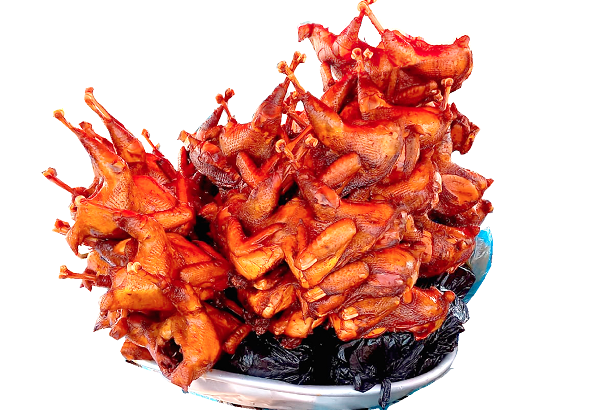 If guinea fowl meat is your favourite delicacy, then Zebilla, capital of the Bawku West District in the Upper East Region, will get you sorted anytime you visit the area.

Guinea fowl rearing is the main indigenous occupation of the people, particularly women who engage in trading of the meat. They neatly grill and fry the meat and sell them along the busy streets of Zebilla.

The most popular joint for the display and sale of the crispy and fresh meat is the Zebilla Customs and Immigration barrier.

Shouting "fresh guinea", the hawkers rush to every vehicle approaching the trading spot to solicit customers.

Major patrons of the meat are passengers travelling to the Sahel region or the southern part of the country. The display of the meat has become a centre of attraction to most passers-by.

The roasted and fried meat can be eaten with red powdered pepper or with fried yam.

According to nutritionists, guinea fowl meat is a rich source of protein and including it in the diet is helpful in maintaining as well as strengthening lean muscles.

Eating guinea fowl meat is a healthier choice as it has low cholesterol as well as low-fat content, and the fat content present in it is three times less than that present in beef.

From time immemorial, most residents, particularly women, have engaged in the trade as their main source of livelihood.

Currently, a sizable roasted or fried fowl is being sold at GH¢70 while a medium one goes for GH¢45.

In an interview with the Daily Graphic, some of the women said they had been trading in the guinea fowl meat for the past years, and they had been able to take care of their children through that vocation.

They, however, decried low patronage of the meat in recent times.

"I have been doing the business for the past 20 years; it used to be very lucrative but these days you can sit the whole day without selling up to five pieces.

“People want it but they don't have money, so sometimes they just come and stand to watch it and move away," a hawker, Adam Fuseina, lamented.

She indicated that she could make more than GH¢600 a day previously, but now she was unable to make up to GH¢200.

Another hawker, Mbama Gloria, who shared similar sentiments attributed the situation to the current economic crisis and was hopeful that sales would pick up when the economy stabilised.

In June 2020, President Nana Addo Dankwa Akufo-Addo, during his tour of the Upper East Region, announced the government's resolve to construct a guinea fowl processing factory in the area.

He said the factory would be constructed under the ‘One District, One Factory’ initiative to help create jobs for the people. However, nothing has since been heard about that promise.

When contacted, the District Chief Executive for Bawku West, Issahaku Tahiru, said plans were far advanced to construct the factory to help process the guinea fowls in the area.

Writer's email: mohammed. This email address is being protected from spambots. You need JavaScript enabled to view it.