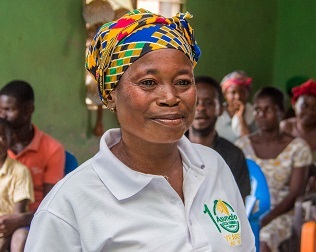 "I have travelled far away from home to be at this important gathering. A few years ago, it would have been impossible for me, a woman, to attend this cocoa farming-related programme," Charity Ofori, a female cocoa farmer, told Cocoa Post.

Earlier, Charity was spotted among dozens of other female cocoa farmers mostly clad in a bright yellow cloth embossed with a circular green and white emblem with the bold inscription Cocoa Life.

A contagious aura of excitement filled the atmosphere as the women motioned in majestic Adowa dance steps in perfect unison to rhythms emanating from the talking drums of a Kete ensemble.

One would learn soon that underneath the excitement these amazing women in cocoa exuded were untold stories of life transformation.

Interestingly, it is the individual change stories of their lives that had brought them from various parts of Ghana to converge at Goaso.

The town, which is the regional capital of the prolific cocoa-producing Ahafo Region, played host to a mini-congress of Cocoa Life animators to coincide with the 2022 International Women's Day. 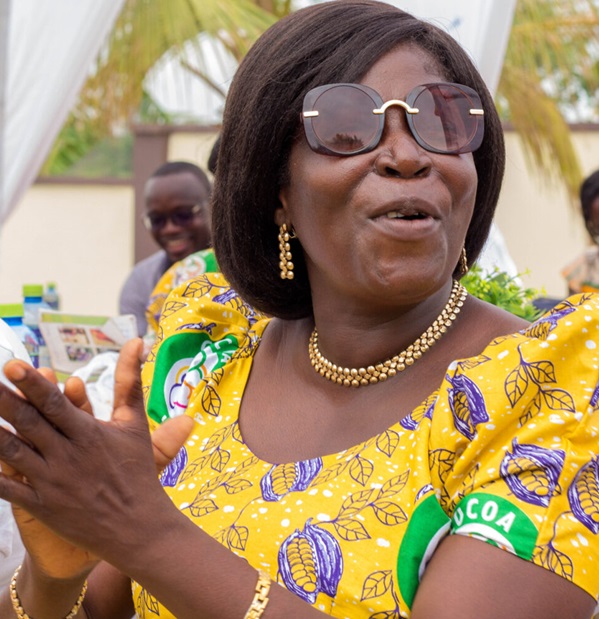 The global celebration hinged on the theme 'Break the bias', demonstrated by striking a crossed-arm pose to signify a commitment to calling out bias, smashing stereotypes and breaking inequality.

Charity Ofori believes the choice of theme was very apt, as she explained: "I am a living testimony of how the essence of Break The Bias can change a person's life."

Currently, she is the proud owner of a 9-acre cocoa farm at Kofi-Asare, a community in the West Akyem District of Ghana's Eastern Region.

The 50-year-old mother of four has worked in cocoa production for almost a decade but had farmed local staples 5 years before.

Aside from farming, Charity now doubles as the vice president of the Odumkyere Damang Cocoa farmers' Society. But that's not all; she is also the assistant treasurer of the West Akyem District Farmers Union. And at the national level, she is the president of a 1,636-member association of Community Animators comprising 15 unions.

Community animators are trained volunteers who serve as focal persons in their communities for farming and development activities.

While there appears to be a growing number of empowered female cocoa farmers in Ghana, Charity admits it hasn't always been the case.

Ghana is the second-largest cocoa producer nation in the world with a vibrant cocoa industry value chain.

The role of women in cocoa production is very essential - from pre-harvest, harvest and post-harvest activities - but are often unrecognised.

The Ghanaian society is predominantly patriarchal, and thus the contribution of women socially and economically is overlooked.

"No matter how hard you work as a woman, you do so to the credit of your husband or father, as the case may be, and you are called names when you attempt rising against the status quo," Charity regretted.

She observed that these cultural barriers have been enforced over time with such suppressive folk sayings like "a woman sells garden eggs not gunpowder", "a woman's place is the kitchen, not the classroom", and "the hen senses daybreak but it must wait for the cock's crow."

These stereotypical sayings have for long worked as mental bondage effectively depriving women of ever attaining heights beyond their cultural boundaries.

It is within this context that Charity Ofori sees her attendance at the Cocoa Life community animators congress at Goaso as highly significant because women were previously excluded from such opportunities.

"It all started about 14 years ago under the Cadbury Cocoa Partnership, when VSO visited our community and enrolled us for training as Women Extension Volunteers (WEV)," Charity recalled.

She narrates that the project was later reviewed and rebranded as the Mondelez International Cocoa Life Program with new implementing partners.

One of the earliest implementing partners was ABANTU for Development, a women's rights organisation, which introduced a novel initiative called the Gender Dialogue Platform to empower women.

Charity recounted, "during one of the initial Gender Dialogue Platform training workshops, the facilitator asked that we close our eyes and dream of our future. And it was in that dream that I perceived my purpose as a leader."

"With hard work and consistent coaching and encouragement by program managers that dream 10 years ago is now my reality thanks to Cocoa Life," Charity stated, adding "and I won't stop dreaming."

Also from the Eastern Region, Doris Korkor Nyame tells of how activities under the Gender Dialogue Platform introduced by Cocoa Life plucked her out of shyness and low self-esteem into local government leadership. 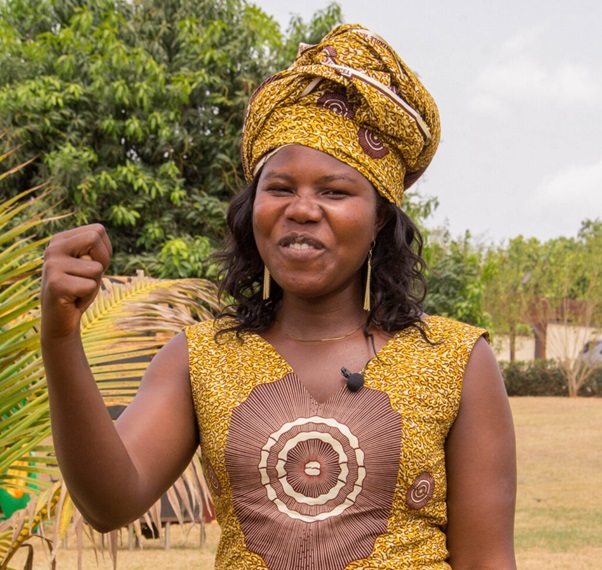 "Through the training, I realised that the limitations I saw were mostly in my mind. So I availed myself for nurturing and resolved to take up the leadership challenge," Doris said.

She would start as a WEV and later as a community animator, where she contested and won the election as the society vice-chairperson.

With the ice now broken, Doris zoomed onto the local government election contesting three males, as the sole female candidate, in a race for the Assembly Member position of the Kofipare electoral area.

"The odds were against me. Some candidates doled out inducements. But consistent with the Gender training, I focused on effectively communicating my message to the electorate. I won and earned the title Honourable Assembly Member," she gleamed with pride.

The Serial Entrepreneur of Dangermu

She joined Cocoa Life in 2015 and was particularly thrilled with the activities of the Gender Dialogue Platform.

"Through their additional livelihood training programmes, I now possess 15 vocational skills including soapmaking, baking, and cosmetics, among others," Grace said.

According to Grace, everything seemed to be going well, until the Cocoa Swollen Virus Disease (CSSVD) was detected on her 9-acre cocoa farm at Dangermu. 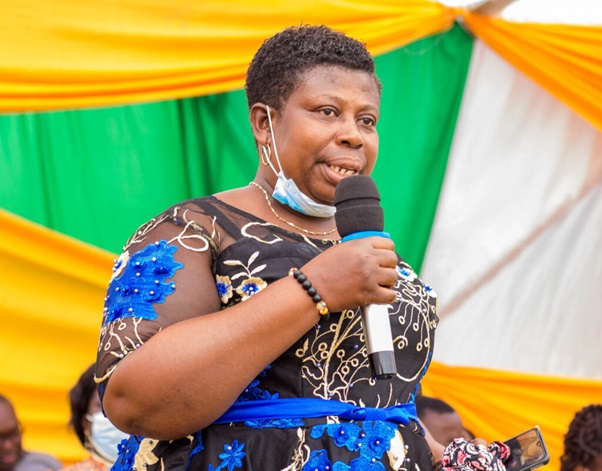 The entire farm has been cut for replanting under Ghana Cocoa Board's National Cocoa Rehabilitation Programme. She noted that although being compensated, the amount wasn't enough to sustain her family of six until the farm would become productive again 3 years from now.

"Thanks to Cocoa Life, income from the soapmaking, pastries and other businesses is now the lifeline of my family, even supporting my third child through the University of Cape Coast," Grace related, adding that with the skills acquired she has been able to create employment for 12 people in her community.

For Angelina Asante of Asuodei community, in the Asunafo North District of the Ahafo Region, Cocoa Life's consistent training on good agricultural practices coupled with farm supplies and equipment has lessened the drudgery associated with cocoa farming.

She was also excited about the Village Savings and Loans Association (VSLA) scheme introduced in her community.

Under the VSLA, Angelina noted, members contributed monthly into a fund out of which they could borrow at a 5% interest rate to procure essential farm input or meet pressing financial obligations.

"With the savings association, cocoa farmers no longer borrow at 100% interest rate from loan sharks; and for some of us women it has become an important source of credit for reinvesting into our provisions retail business," she underscored. 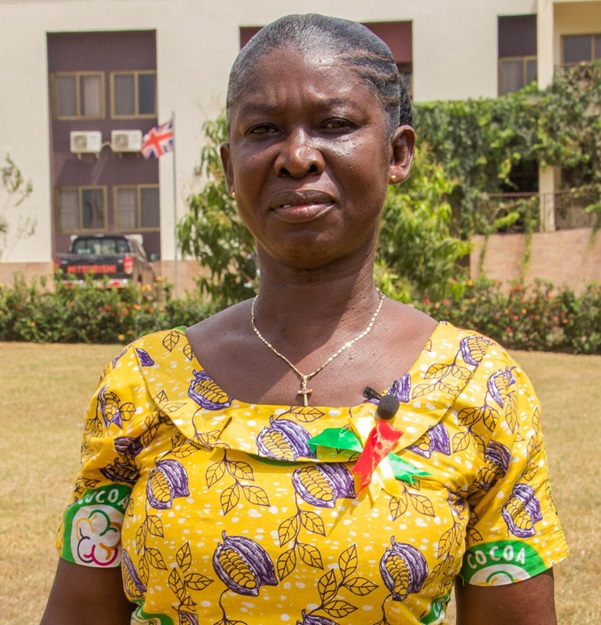 She again observed that through effective sensitisation there is evidence of women's increasing participation in community development deliberations and decision-making, whereas in the past women had no representation.

Like her other colleague women in cocoa production, Angelina is convinced that the Cocoa Life Program has been impactful in the communities, while the transformation of their lives bears ample testimony.

She advocated for an expansion of the intervention to benefit all cocoa farmers in Ghana, especially women.

Cocoa Life Program was launched in 2012 to invest $400million to improve the livelihood and living conditions of 200,000 cocoa farmers while impacting 1 million community members in Ghana, Cote d'Ivoire, Indonesia, India, the Dominican Republic and Brazil.

In Ghana, the program currently operates in 820 cocoa communities with 75,000 participating farmers.

The Ghana Country Lead for Cocoa Life, Yaa Peprah Amekudzi, told Cocoa Post that membership of Cocoa Life societies is open to all cocoa farmers in partner communities, explaining it is the conduit by which necessary cocoa sustainability interventions by Mondelez can reach as many cocoa farmers as possible.

Although it does not buy cocoa beans directly from Cocoa Life partner farmers, Mondelez is among the major buyers of Ghana cocoa through its supply contract with Ghana Cocoa Board.

Kojo Hayford is the Founder and Executive Director of Cocoa Post (www.theCocoaPost.com), a cocoa industry media, research and advocacy organisation.