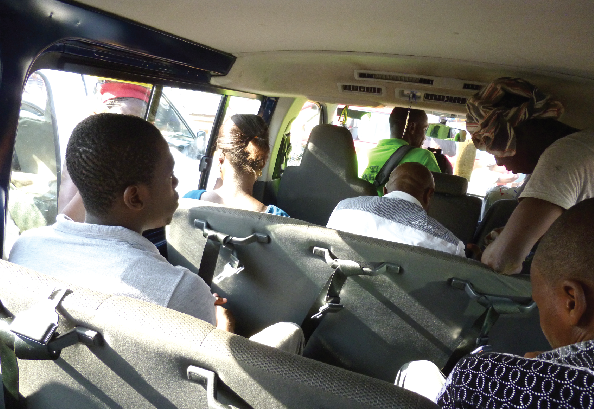 Kwame Anom, a 56-year-old driver, is a survivor of a road accident that nearly snatched his life. The father of four children aged between nine and 22, is alive and lucky to have escaped death .

He had gone to Donkorkrom, the capital of Afram Plains, to see to family issues and was returning to his family in Accra when he was offered a lift by two men driving a Mercedes Benz salon car on August 25, 2013.

Mr Anom told me that immediately he sat in the vehicle he buckled up, a single act that he thinks had significantly snatched him from the jaws of death.

“We were moving above average speed and when they reached a section of the Accra-Kumasi highway at Suhum, the car rammed into a concrete barricade in the middle of the road”, he recounted, adding “you should have been there to see how  mangled the car was”.

He had a perforation of the bowel as a result of the pressure the seatbelts exerted on his abdomen and was rushed to the Eastern Regional Hospital for treatment, while the other two occupants, also in seatbelts, were sent to the Suhum Government Hospital.

“I was on the back seat of the Benz car and had it not been the belt I would not be alive today”, he proudly kept saying as he groaned on his hospital bed after undergoing surgery.

When I checked on him after a week, I was told that he had been discharged.

In contrast, the non-use of a seat belt by a 35-year-old marketing executive and events organiser, Felix Nii Lamptey, caused him to lose a limb after sustaining multiple fractures and a deep fracture in the skull when he was involved in an accident on September 1, 2013 on the Koforidua-Akwadum road.

He was travelling from Koforidua to Suhum together with his colleagues.

I met Felix sitting in a wheelchair at the same hospital with an amputated left leg and his right leg in Plaster of Paris (POP) due to fractures in the ankle. He seemed to have overcome his handicap with the care and support of his wife who washes and does almost everything for him.

“I am not worried at all. I am still alive because my lovely wife is always by my side”, he said, smiled and stared at his 30-year-old wife’s face.

The young graduate told me that he was in the backseat of his company’s Hyundai salon car sleeping and did not have his belt  on. “I only woke up at the hospital to see my left limb cut off”.

“Probably, I would not have been in a wheelchair today if I had worn my seat belt”, he stated. Fortunately for him, his company is footing every medical expense.

Seat belts are designed to protect drivers and passengers yet, many Ghanaians do not recognise the enormous benefits of this safety device.

Gone are the days when passengers could not fasten their belts while travelling on commercial vehicles because they had no seat belts except the front seats.  Such vehicles included Bedford trucks, popularly known in a local parlance as ‘aroll glass’,  Datsun Pickup with a body built on it for passengers and Nissan Hommer in which passengers sat and faced each other, as well as Nissan Urvan minibuses that were imported into the country from Lagos.

Today however, a number of commercial cars, mainly new airconditioned Nissan Urvan, Toyota Hiace and Hyundai minibuses, are fitted with seat belts that should make travelling more comfortable and safer.

Unfortunately, the seatbelts in most of these vehicles are made unusable by drivers who tie them behind the back or beneath the seats, leaving safety-conscious passengers without the choice of using them.

I set out to find reasons why these drivers make such seat belts useless and the answers they gave were that the Ghanaian passengers disliked seatbelts, an insight which has proven that most Ghanaians are not safety-conscious.

“I don’t deliberately tie the belts in my vehicle. I am forced to do so because passengers do not wear them”, said Mr Kojo Kwarteng, a bus driver plying Koforidua and Madina.

“Passengers prefer to remove the belts from the seats and place them on the floor and step on them. That gets the belts dirty”, he claimed.

Complaints I had speaking to other drivers who ply the  Koforidua-Accra and Koforidua-Kumasi roads were similar to the claims made by Mr Kwarteng.

“Hey, most Ghanaian passengers simply do not like seat belts as they complain of not feeling comfortable when they buckle up,” reaffirmed Mr Kofi Dankwah, who has been plying Koforidua to Tema and Madina for the past 34 years.

“Even when you insist that they fasten up, some passengers insult you,” he said, “and to avoid any rude attitude towards me, I prefer to tie them,” Mr Emmanuel K. Darko, an Accra-Koforidua driver, added.

A ‘bookman’ at the Kumasi Lorry Park also told me that many passengers ignored his advice to them to buckle up.

“How can you then force somebody ?” he asked me, and added; “What drivers care about is getting passengers safely to their destinations.”

I learnt from the drivers that the attitudes of most Ghanaian passengers were in sharp contrast to that of tourists.

“If a white person boards my car, the immediate thing he does is to wear the seat belt without being told to do so,” recounted Mr Emmanuel Darko.

Almost all the drivers appeared to place the blame of lack of interest in wearing the seat belt among Ghanaians on inadequate road safety education and enforcement, with a few identifying the poor road conditions as a factor discouraging seat belt use.

“The roads in Ghana make seat belt use a big disadvantage, as most passengers say they feel uneasy strapped in belts,” explained Mr Darko.

Are transport unions aware of the  practice?

The drivers of these new commercial buses are members of the various transport unions from whose executive I wanted to know if they were aware of the phenomenon. It appeared that they were far removed from the reality.

“You will never find any of our drivers  tying belts”, said Mr Stephen Sarfo, the Eastern Regional Chairman of the PROTOA, who claimed that the drivers of the association were “safety conscious”.

“Go to any of our station and you would never see this practice”, he challenged me on the grounds that the association advised its drivers to first wear seat belts and encourage passengers to also wear theirs before leaving for their various destinations.

At the Eastern regional headquarters of the GPRTU, its chairman, Mr Johnson Kyere, also claimed that they were unaware that their drivers did not wear seat belts.

“We have taken your observation in good faith and we would investigate to find out why they do this”, he said and gave the assurance that they would educate their members to refrain from the practice.

When I interviewed a number of passengers travelling from Koforidua to Accra and Kumasi aboard the new air-conditioned mini buses, the answers they gave revealed that they were aware of the importance of seat belts but did not want to wear the belts.

“It never occurs to me to put on the seat belts”, retorted Isaac Opoku Debrah, a student of the Koforidua Polytechnic, who attributed the problem to lack of education and enforcement.

“I get nauseated anytime I put on seat belts”, voiced 24-year-old Akyaa Sherifa Asua, a student who was recently involved in an accident that claimed the life of a person at the New Tafo junction while travelling from Kumasi to Koforidua.

“Even after the incident, I still do not wear seat belts though I know how protective they are”, she added.

Though most passengers show apathy towards the use of seatbelts, the non use of belts in vehicles flouts the Road Traffic Regulations Act, which states that where there are  seat belts they must be used.

Furthermore, Article 119 (2) adds that “A person shall not drive a motor vehicle unless the motor vehicle is fitted with a seat belt”, a requirement that the Eastern Regional Director of the National Road Safety Commission, Mr Kwasi Tsibu Yirenkye, said was flouted.

He blamed passengers apathy towards seat belts on the lack of vehicle standards in Ghana which could partly be blamed for passengers not wearing the device.

“Many vehicles meant to cart goods are imported into the country and converted to passenger vehicles and there has been no enforcement of the law to check this practice”, he said, and added that “education could be derived out of enforcement”.

“Enforcement is about educating people to wear seat belts and I have problem with the enforcement authority”, he said, and added “somebody is paid to enforce the law to ensure that both drivers and passengers buckle up all the time”.

Risks of not putting on seatbelts

For many years, road carnage has become a major challenge as many people continue to perish on our roads with others sustaining lifetime injuries.

As of June 2013, 169 persons had perished on our roads and 1,175 persons injured in accidents that involved 580 commercial vehicles, 331 private and 73 motorbikes in the Eastern Region, statistics obtained from the MTTU revealed.

Some of these fatalities could be reduced with the use of seat belts in commercial vehicles.

In the opinion of Dr Foster Menu Amponsah, a Senior Specialist General Surgeon at the Eastern Regional Hospital, the failure of passengers to put on their seat belts exposed them to many avoidable fatalities such as injuries to the cervical spine, head, chest, abdomen, limbs and blunt injuries (close injuries) that led to internal bleeding with some organs rupturing.

That, he explained, could lead to massive bleeding and eventual death.

“A passenger is also vulnerable to permanent damages such as paralysis resulting from spinal cord , amputation of the limbs due to multiple fractures, ruptured intra-abdominal viscous and losing vital organ”, he stressed, and added that “in the worse scenario, it leads to death”.

While he admitted that the use of seat belts could not provide protection and could lead to limited injury to the spinal cord, its benefits were enormous to be ignored.

“Seat belts confine a passenger and limits the injuries that results from hitting the body against the vehicle”, he stated, adding that the safety device makes travelling more comfortable because “it keeps you in the seat and allows your body to take  easy shocks on the roads”.

Are the police doing enough to curb the practice?

“Admittedly, the police have done commendable work as they embark on inspections of vehicles to ensure that drivers wear seat belts but they have failed to extend inspection to passengers”, says Mr Yirenkye.

“When the police enforce the law, they end up educating and where the law says enforcement must be done, it is their duty to enforce them”, he said, pointing out that a passenger was also mandated to use the seat belt as the law required.