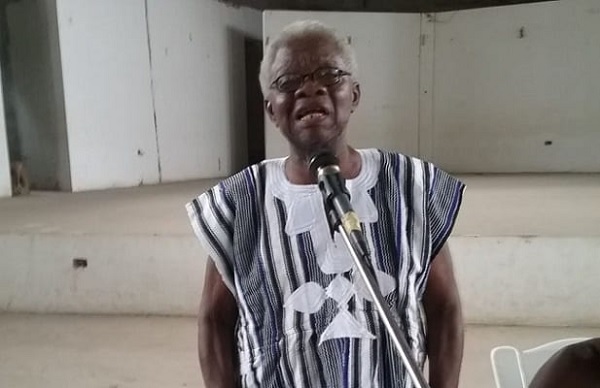 It started as an intellectual exercise by a group of persons who named themselves collectively as Homeland Study Group Foundation (HSGF).

It appeared that the group’s leader, Charles Kormi Kudzordzi and other senior members of the HSGF, had attracted persons to join them to investigate the idea that that part of Ghana, known formerly as Western Togoland or Trans-Volta Togoland, could regain its former status by separating itself from the Republic of Ghana.

That must have been the basis of their intellectual exercise — to find out if Western Togoland could, by law, become independent of Ghana.

It had been argued by the HSGF that, by their interpretation of provisions of the United Nations Charter with its international trusteeship system, the trusteeship agreement between the UN and Britain on British Togoland had expired after 50 years.

That means former Western Togoland would return to its previous status after 50 years and another plebiscite would take place to sample public opinion there again.

If that had been the true position by law, then a new plebiscite was necessary for the citizens to make a new decision.

However, that position is not supported by international law.

Trans-Volta Togoland or Western Togoland was a Nazi German colony established as a German protectorate in 1884.

After defeat of Nazi Germany in the First World War (1914-1918) and signing of the Treaty of Versailles, the western part of that German colony went under British administration.

It was, from then on, known as British Togoland.

After another defeat of Nazi Germany in World War Two by the Allied Forces of which British and France were members, British Togoland became a territory entrusted to Britain under the UN trusteeship system.

In 1956, the Gold Coast, a British colony under the Bond of 1844, the Treaty of Jelukope of 1874 and others, was on the verge of becoming independent.

The UN requested the British government to hold a plebiscite in British Togoland for the people there to determine the future of that territory because it was not, technically, a British colony.

The plebiscite was held on May 9, 1956 and majority, (58 per cent) of Western Togolese decided, for all time, that they loved the Gold Coast and would like to be part of it when it became independent of Britain.

Some 42 per cent of the voters, decided against the idea of remaining in the Gold Coast.

It was a binding simple majority decision communicated to the UN headquarters in New York, USA.

The UN General Assembly, by a resolution, upheld the people’s decision and agreed that British Togoland should be part of the Gold Coast after independence on March 6, 1957.

That UN trusteeship convention was universal and was replicated, for example, in the former Nazi German colony of Cameroun that was divided into two, with Britain taking possession of Western Cameroun and France, Eastern Cameroun.

At plebiscite, the people of British Cameroun then decided to leave Nigeria, then a British colony and join French Cameroun.

In all instances, the decisions at plebiscite was final and irrevocable.

After their intellectual exercises, the HSGF must have realised that there was no way by law for Western Togoland to break away from Ghana.

The available option is use of force.

That is not a legitimate choice.

It is a dangerous option that is not founded even on pressing needs and exigencies.

A case for secession of a territory by force of arms must, in principle, be based on certain moral factors.

Such factors should include discrimination, marginalisation, stigmatisation and definitely receive the approval of almost all the inhabitants.

On May 9, 2017, the HSGF attempted to declare unilateral independence for Western Togoland.

A year later, eight members of the HSGF were arrested for attempting to declare Western Togoland independent.

Then, an executive member of the group, Emmanuel Agbabo, told the police that they did not have a militia and that the group did not plan to use force.

It was not surprising, however, that on September 25, 2020, the HSGF allegedly launched a guerrilla warfare to break Western Togoland away from Ghana.

On September 25, 2020, a number of persons believed to be members of HSGF were arrested in a joint military and police operations for engaging in typical guerrilla tactics.

The police had said those arrested attempted to take over the Akuse and Akosombo hydroelectric power stations.

Some alleged operatives of the HSGF attacked a number of police stations in the Volta Region and made away with assault weapons and a truck.

A brief look at secessionist and terrorist bids in Africa indicates that they could be protracted and expensive ventures that are difficult to bring under control.

Non-Islamic secessionist or terrorist bids such as those of the Lord’s Resistance Army of Uganda; the Biafran civil war with Nigeria and the UNITA conflict with the FNLA, both of Angola – though protracted, were finally subdued.

It is difficult to subdue, quickly and completely, Islamic secessionist or terrorist operations.

The groups that embarked on such operations received long-standing financial support from powerful and well-funded transnational Islamic organisations such as Al Qaida and Islamic state.

Boko Haram of Nigeria, Al Shabab of Somalia and the Taliban of Afghanistan are Islamic militant groups that continued to come back even after major defeats.

For Ghana, the HSGF secessionist quest is not deeply rooted, in that it has not received the support of the chiefs and majority of people in the former Western Togoland.

The chiefs of the area have dissociated themselves from the so-called state of Western Togoland.

They have stated that they remained Ghanaians and would have nothing to do with the idea of breaking away from Ghana.

The chiefs have associated themselves with efforts of the Ghanaian security forces to suppress the rebellion.

That appears to have broken the spine of the secession bid in areas under the jurisdiction of the traditional rulers and their people.