Welcome to Ekumfi Otuam, land of rocks, beautiful beaches and a President 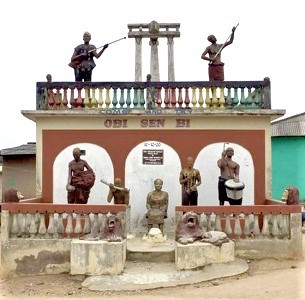 The Abanho is said to hold the strength and spirit of the people of Otuam
30.5k Shares

It is a town of rocks and beautiful beaches. The people pride themselves as fearful warriors.

Their mantra, "Ekumfi ankwaa na nye Otuam bi a," to wit ‘if other towns fail to show up for battle, Otuam will definitely show up,’ tells the fearlessness of their ancestors.

A resident of the community will not miss an opportunity to remind a visitor that the late President Professor John Evans Atta Mills was a native of the town.

Ekumfi Otuam in the Ekumfi District in the Central Region is undoubtedly a beautiful, serene place one would love to visit.

The community is accessible by road from the Essuehyia junction between the Apam and Mankessim stretch.

The road's intermittent dusty stretches make travel to the town not so pleasant but the serene nature of the town soon calms ruffled nerves.

The streets of the town are relatively clean, and so are the paths.

Meandering rocky paths lead to a beautiful beach with many canoes. The people of Ekumfi Otuam are mostly fishermen but some engage in farming.

According to the Assembly member for the Otuam Akosombo Electoral Area, Samuel Nimo Acquaah, the people of Otuam are a group of indigenes known as the Borbor Mfantse who migrated from Bono Manso through Techiman in the 15th century and finally settled in and around Mankessim in the Mfantsiman Municipal District.

“The people of Otuam later settled a bit inwards towards the sea,” he said.
Otuam, a community of about 5,000 people, hosts the Adonten stool of the Ekumfi Paramountcy and is said to be the warriors who protect the it from enemy attacks.

The other migrant groups which moved from Techiman were the Enyan, Abeadze and Nkusukum who settled in other parts of the Central Region.

During a visit to the community, some men were seen sitting at the "Abanho," the shrine of the Ekumfi Otuam community, discussing issues relating to their Akwanbo Festival.

The traditional shrine is an amazing edifice and work of art as pertains in many Fante communities.

The chief drummer and an elder of the community, Okyerema Kow Bakyereba, said the shrine was an embodiment of the strength, value and spirit of the people of Ekumfi Otuam.

He said the community was working to make their town cleaner to make it attractive to visitors.

Kofi Yakubu, an elder of the town, said they were nice and kind people who were hospitable to strangers.