We are gradually becoming a nation of ostriches 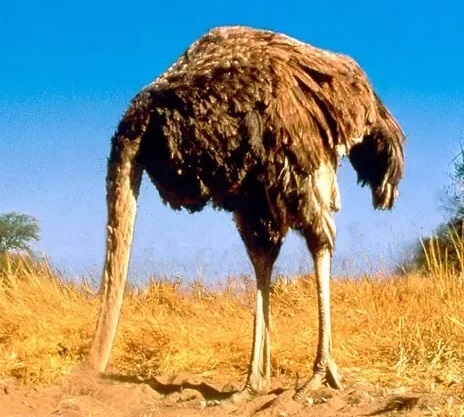 ONE of the nuggets of wisdom that parents of old gave their children when they were leaving for the boarding houses of secondary schools in our days was: “KEEP AWAY FROM TROUBLE - whatever that trouble is”. They then go the next step to say: “AVOID TWO STRANGERS FIGHTING”, especially when you do not know the root cause of the fight because probably the fight was being staged-managed to attract you and get you into trouble.

Simple and short, what they were trying to teach their children was simply ‘mind your own business.’ Don’t poke your nose where it doesn’t belong.

Unfortunately, when this is set against the myth of ‘don’t behave like the ostrich’, then it seems to fly in the face of the argument.

Ostriches bury their heads in the sand in the attempt to, supposedly, hide from predators, working on the assumption that “if I can’t see them, they can’t see me.”

“Behaving like an ostrich” then means ‘ignoring an imminent danger or serious problem in the hope that it will go away or cease to exist’. This phenomenon has led to the idea that if “people refuse to face painful facts or unpleasant truths, they play or act like the ostrich by wishing them away or pretending that they don’t exist.

Truth be told, nobody can wish away his or her problems and definitely, not a nation or a people.

With this in view, the ‘OSTRICH POLICY’ has been defined as a metaphoric expression referring to the tendency to ignore obvious matters and pretend they do not exist; the expression deriving from the supposed habit of ostriches to stick their heads in the sand rather than face danger or the ‘Truth of Life’. This is in simple terms a ‘life of pretense’, that we are all unmindful of all that is happening around us – complete disregard for the real world around us.

Over the last few years, many questions have been asked about the whereabouts of the ‘national voices of concern, distress, apprehensiveness, disquiet, uneasiness, or anxiety’ – those selected number of Ghanaians, who have assumed or become ‘those voices’, who have always questioned the direction, style and quality of governance that we have had to contend with over the period in question.

These voices, including those from the church, were most vocal in calling past governments to account and responsive to the needs and cries of the citizenry, playing the role of supposed ‘STATESMEN & WOMEN’ as the ‘consciences of the masses’, presuming that the rest weren’t capable of self-consciousness or what is alleged i.e. ‘not capable of thinking for themselves or worse, not capable of what they require for themselves.

A ‘statesman’ is said to be a person who is experienced in the art of government or versed in the administration of government affairs, whilst such a person ought to exhibit great wisdom and ability in directing the affairs of a government or in dealing with important public issues. However, I have one caveat to the definition: within our Ghanaian or African context, such a person will, by all indications, be a typical partisan politician, which for me does not do justice to the real intent of who a statesman is?

My thinking is that such a person having served a partisan government for a fixed number of years, no matter the number of times he or she had been appointed to serve, would on retirement, see himself or herself as a NON-PARTISAN STATESMAN, shedding all semblances of partisanship to become a ‘state’s man’, only committed to real issues of the state than seeing them from a partisan lens; and therefore could be called upon to mediate and or offer counsel in all matters of state, irrespective of which political party is in power, to only stand up for the ‘motherland’.

Indeed, such a person would have ceased to be an ‘ostrich’ in the current political landscape, rising above all semblances of partisanship and why I would make reference to two such men in recent times.

I wish to refer to a story attributed to my definition of a ‘statesman’, Mr. Kwame Pianim, an economist and a founding member of the ruling New Patriotic Party (NPP), who against all noises and scheming from the highly volatile, partisan Parliament House, charged Members of Parliament to pursue dialogue to settle differences in the House; and not the acrobatic displays that seek to inform the populace that the MPs had missed the road, forgetting who they really work for.

The second story relates to a former Attorney General and a leading member of the New Patriotic Party (NPP), Nii Ayikoi Otoo, who virtually in an admonishing tone said that President Nana Addo Dankwa Akufo-Addo should be listening to the concerns raised about his foreign travels, if he really wants to hand over power to a government of the NPP after the 2024 Elections. My issue has nothing to do with the handing over to another NPP government in 2024 but the courage against the numerous praise-worship and praise-singing partisan men, who should have the same courage to comment on such matters of state, supposed ‘statesmen’ from the NPP tradition to call out against what is gradually becoming an ‘ostrich’ issue or attitude.

Like Okonkwo of the ‘Things Fall Apart” novel, we are tempted to ask: where are all the voices who in the past, had been so vocal in calling out the wrongs of the past from not only the pulpits of various churches but from lorry parks like the new ‘Tarzans’ of past dispensations, making some of us ask whether they have lost their tongues with time or playing plain ‘ostrich’ of pretenses?

Indeed, what we are witnessing now should not be likened to the old ‘era of culture of silence’, which needed my late senior, Professor Emeritus Albert Adu Boahen (author of ‘MFANTSIPIM AND THE MAKING OF GHANA’ – a book he dedicated to other stalwarts of the School, J. Kwesi Lamptey, J. B. Amissah-Abadoo and F. L. Bartels as well as celebrate MOBA 1950 Year Group).

I am inclined to invoke the same spirit that Senior Prof. Adu Boahen (MOBA 1950) possessed to write and deliver his famous 1988 J. B. Danquah Memorial Lectures on the then crippling “CULTURE OF SILENCE” that turned many men into something akin to playing ostrich in the affairs of state. Over three decades after his fiery deliveries in 1988, I think it is about time that we remind Ghanaians, calling on us all to go back to read the full lecture by Senior Prof. Adu Boahen so that we are not accused of repeating history.

Where are the modern-day ‘incarnations of the late P. V. Ansah of ‘Prabiw Street, Saltpond’ for his famed “GOING TO TOWN” column, who will refuse to play the ‘ostrich’ and face up to the truth always? We need to appreciate that the FUTURE of our nation does not lie with the left or right but with the true patriots, who refuse to pretend to only say what the leadership of government or opposition party say but only seek the interests of our nation and our people. This is the only true CROSS we have to carry for the development of Ghana.

The ‘Ostrich Mindset or Myth’, where we bury our heads to avoid negative feelings, often of guilt, when confronted with the truth of double standards; or the ‘Ostrich Syndrome’ in denying or refusing to acknowledge something that is blatantly obvious, should be a thing of the past in the supreme interest of our nation, and therefore we should always be consistent with our views, beliefs and values that will seek the collective good of our people than the parochial, partisan interests of one party. This should at all times underscore all discussions nationwide, especially at the Parliament House and all corridors of power and government: ‘GHANA FIRST, EVERYTHING ELSE SECOND’, whether majority or minority.

The Author, Magnus Naabe RexDanquah is a Land Economist & Appraiser, SportBusiness Consultant and Author – (excerpt from manuscript “NATION ADRIFT AT SEA – Ghana In Search of Her Soul, Identity & Values”)