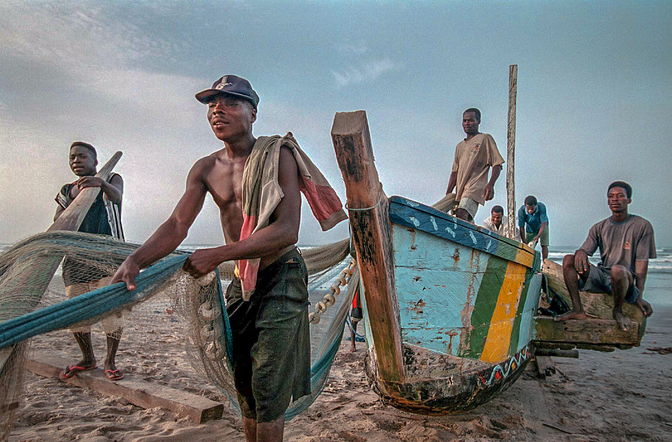 “You don’t give to people what they want. You give what the people don’t want but ought to have”.

“Free is expensive and expensive is free” Nyamali, the 15 years experienced fisherman retorts to my question: “How is the harvest today”?

This thought-provoking statement started a long conversation that suggests a dwindling fishing season with less or no catch to make.

Nyamali, this time, directed a question at me: “How do I feed my wife, children, and my pretty old ailing mother with this profession I have inherited from my father, looking at the low catch I have to deal with every day?

This same question, I, in turn, a throwback to all Ghanaians, politicians, and government officials at the herm of affairs to find answers to.

Nyamali is not alone in his predicament, as close to 2.7 million Ghanaians could be rendered unemployed should the Ghanaian Fishing industry and fisherfolk be left aloof, as their cry vis-à-vis their inability to break even, owing to low yield fishing declining from 35.4 tons in 1992 to 15.5 tons in 2016 according to the Dean of School of Research and Graduate Studies at GIMPA, Professor Wisdom Akpalu, a situation that has multiplied wayward children, increased migration to cities, tripled hawking on the streets and encouraged all kinds of illicit criminal activities.

In Ghana, 20% of the working class are engaged in fishing and fishing-related activities but year in and year out, harvesting fewer fishes as a result of varied human activity that has been identified as environmentally unfriendly, alongside erroneous government interventions culminating in low yields and also hash living conditions for families.

Fishing forms part of Ghana’s renewable natural resource and accounts for 15% and 5% of the size of our agricultural GDP, an Export revenue of about US$15M annually while providing 60 to 70% of animal protein to keep Ghanaians in good health thereby preventing an overwhelmed health system with mineral deficient health-related problems.

Subsidies are sums of money granted by the state or a public body to help an industry or business keep the price of a commodity or service low. It is meant to help alleviate suffering or otherwise a burden that is of public interest for the promotion of social good.

It may come in diverse forms with varied names such as endowment fund, indemnity, honorarium, gratuity, aid, and many other descriptions meant to alleviate poverty.

One of such erroneous government interventions that immediately comes to mind is premix subsidies and subsidy on outboard motors provided to fishermen with the aim of enhancing their fishing expedition to feed themselves and the Ghanaian populace.

The big question: “Have we alleviated the suffering of the fisherfolks through such interventions or have we aggravated their plight”?

Ghana over the years is known for its rich mineral resource from beneath the earth, on the surface of its soils and its beautiful rich coastlines which inhabits the natural fishing resource found around the coast of its capital, Accra, through to the Central Region, Volta and the Western Regions predominantly fishing communities- (Ghana’s fish basket).

Fishing in these communities have taken a dissimilar twist as the years unfold with frequently continuous increasingly low yields, year in and year out, a situation, that is killing the fishing industry in Ghana, leaving most skillful professional fisherfolks to hang their nets for better opportunities down south hence frequently spotted on the busy streets of Accra, selling dog chains and into other petty hawking activities.

Governments over the years have identified the dwindling fishing predicaments confronting its fisherfolks and on several occasions assumed the position to help salvage the problem through the provision of subsidies for fishing communities to easily access such for fishing, an intervention that is rather killing the people than doing them any good.

Providing such subsidies has intensified fishing efforts and fisherfolks have done this through light fishing, using dynamites in fishing to blow off fishes and the use of small mesh which scoops the waters dry leaving it barren and almost near extinction hence fish Stocks unable to replenishes itself.

Instead of finding ways to discourage everyday fishing to allow room for more and better harvest for our fishing folks, the government provides subsidies to send them fishing every day to totally deplete our waters and the evidence we have seen over the years as Ga’s have not had enough fish to celebrate the popular Homowo which is a celebration of plenty in recent years.

According to Professor Akpalu, Fish is a mineral resource that is renewable just as humans procreate without which it suffers extinction therefore the need to allow that natural habitat adequate space and planning to boost the longevity of the industry to feed its’ people and the nation at large.

Government interventions over the years have mostly leaked into individual pockets as these fishers see no premix or have accessed same rubbishing the purpose for the subsidy, culminating into imports of unwholesome fishes from China and other developed countries, high reliance on aquaculture, rendering our people emaciated, jobless and hungry.

What then does a nation require of a hungry man? An angry citizen, ready to evade your peace, pull a gun at you and take away what has been taken away from him.

The most miserable aspect of the plight of the Ghanaian fisherman has to do with his constant struggle at sea, catching pelagic species in an attempt to survive and in the process harvesting the small fishes that need space to grow and also multiply to replace the depleted stock.

Subsidies failed, the sea has no rest for the breeding of its fish stock to multiply, the fisherman is hungry and angry, citizens cannot buy fish resulting from its scarcity and cost thus resort to imported fishes some of which is plastic.

Hospital gets chocked with all kinds of preventable diseases and in the process, a lot of pressure on hospital resources, nurses and doctors, mortuaries get full with its staff stressed and agitated threatening strikes. The harm goes on and on …….

The so-called subsidies which are to better the plight of the fisherfolks have done otherwise and the result is what is staring us in the face: increased crime, prostitution, child trafficking, money laundry, ritual killings, the proliferation of churches and fake pastors, low life expectancy ratio and many others.

Governments must walk the talk to achieving the undersigned Sustainable Development Goals (SDG) 1- 3 which promises no poverty, Zero Hunger, Good Health and Well-being for citizens of the world as well as SDG 14 and 15 which makes provision for the protection of Life Below Water and Life on Land.

The writer is a staff of the Information Services Department (ISD)