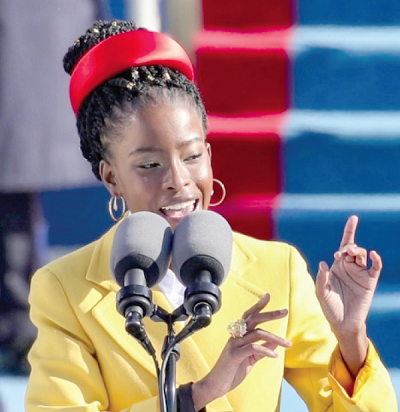 A fresh thorn in the side of racial injustice, Amanda Gorman, the poet laureate, chimed salvoes of words piercing the conscience of heirs of systemic racism.

Without a gun, without a Molotov cocktail, without a mob of insurgents — but with the ember of an undying spirit — the poet’s power incited justice.

Her voice must have darted shivers in the spine of advantaged beneficiaries of chronic inequities.

It’s as though white Americans were frightened by the expanding demand for fairness and equity as exhibited by the Black Lives Matter movement, after the strangled murder of George Floyd.

Threatened at the core by the looming loss of privileges extracted from the backs of African Americans for four centuries and counting, white America is clearly pathologically nervous by the threat of a fair playing field for all.

The inauguration of Joseph R. Biden Jr as the 46th President of the United States ( January 20, 2021) was full of emotion and promise. Key among the performers was the new kid on the block - Amanda Gorman.

Gorman must have borrowed a page or two from the quintessential Maya Angelou, who set the tone as the poet laureate for former President Bill Clinton’s first inauguration in 1993, with the poem, “On the pulse of the morning.”

(When Angelou died in May 28, 2014, it was a great honour to have been asked by Citi FM to pay a tribute in her memory.

For years, I had taught her book, “I know why the caged bird sings,” published in 1969, in which she acknowledged “Nana Kobina Nketsia IV, who insisted that I must [write it].”

She had lived and performed in literary circles in Ghana and developed a kinship with the country.)

One of my favourite Angelou poems was this one – titled, “And Still I Rise”:

“You may write me down in history / With your bitter, twisted lies, / You may trod me in the very dirt / But still, like dust, I’ll rise.

“Does my sassiness upset you? / Why are you beset with gloom? / Cause I walk like I’ve got oil wells / Pumping in my living room?

Her work focuses chiefly on matters of oppression, feminism, race, etc. Stealing the show, the inaugural reading of the 22-year-old genius went like this:

“When day comes, we ask ourselves where can we find light in this never-ending shade?

The loss we carry, a sea we must wade. / We’ve braved the belly of the beast. / We’ve learned that quiet isn’t always peace  and the norms and notions of what “just” is, isn’t always justice.

“And yet, the dawn is ours before we knew it. / Somehow we do it. / Somehow we’ve weathered and witnessed a nation that isn’t broken, / but simply unfinished.  / We, the successors of a country and a time where a skinny Black girl / descended from slaves and raised by a single mother / can dream of becoming president, only to find herself reciting for one.

“And yes, we are far from polished, far from pristine, / but that doesn’t mean we are striving to form a union that is perfect.  / We are striving to forge our union with purpose.  / To compose a country committed to all cultures, colours, characters and conditions of man.  / And so we lift our gazes not to what stands between us, but what stands before us. / We close the divide because we know, to put our future first, we must first put our differences aside.

That we’ll forever be tied together, victorious …

“That is the promise to glade, the hill we climb, if only we dare.  / It’s because being American is more than a pride we inherit.  / It’s the past we step into and how we repair it.  / We’ve seen a force that would shatter our nation rather than share it. / Would destroy our country if it meant delaying democracy.  / This effort very nearly succeeded…

“So while once we asked, ‘How could we possibly prevail over catastrophe?’ now we assert, ‘How could catastrophe possibly prevail over us?’ / We will not march back to what was, but move to what shall be:  / A country that is bruised but whole, benevolent but bold, fierce and free.  / We will not be turned around or interrupted by intimidation because we know our inaction and inertia will be the inheritance of the next generation.

“Our blunders become their burdens. / But one thing is certain:  / If we merge mercy with might and might with right, then love becomes our legacy and change, our children’s birthright. / So let us leave behind a country better than the one we were left. / With every breath from my bronze-pounded chest, we will raise this wounded world into a wondrous one…

The writer is a trainer of teachers, a leadership coach, quality education advocate.