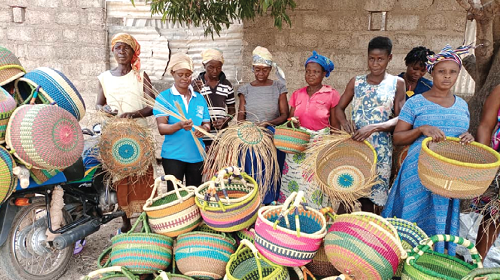 Whenever you see young men carrying baskets in various shapes and sizes on bicycles, motorbikes and motorised tricycles on market days in the streets of the Bolgatanga municipality in the Upper East Region, do not be surprised.

This is because it is one of the many facets of the basket weaving industry in the region. The youth are now passionately and aggressively marketing the beautifully made baskets popularly called the “Bolga baskets” because of increasing demand for the product and for jobs.

Indeed, along the value chain of production, the industry offers thousands of residents in the region including women job opportunities.

For one thing, some of the young men locally referred to as “Biala Biala Boys" in the basket trade have either searched for jobs after completing tertiary education unsuccessfully or are into the sale of baskets to enable them to save enough money to further their education.

With a working capital of at least GH¢1,000 any young man can start the business by buying directly from weavers who are mainly women located in such communities as Zorkor and Nyariga during market days.

After buying baskets from the weavers, these enthusiastic young men then sell these baskets to large-scale exporters in the region to make some profit and earn decent incomes.

There are about 30 large-scale exporters of the baskets in the region and they employ thousands of residents, many of whom are women.

However, there are some challenges confronting them in their bid to market the products globally.

These include high cost of the dyes used to decorate the baskets, limited quantities of straw in the north, hence the straw has become expensive, making it difficult for exporters to produce more to meet increasing demand.

The issue of inadequate supply of the straw derived from the Vetiver grass, which is grown for many purposes due to its fibrous properties, poses a serious threat to the survival of the industry.

To produce baskets in commercial quantities, the grass must be harvested in large quantities along rivers or other water bodies in the Ashanti and Bono regions and conveyed to the Upper East Region.

Therefore, resolving the issue of growing the Vetiver grass in commercial quantities in the region is a prerequisite to sustaining this viable basket weaving industry according to some basket weavers in the region.

The Chairman of the Bolgatanga Basket Dealers Association, Mr Martin Adongo, noted that the weavers readily got access to the Vetiver grasses as raw materials for weaving the baskets several years ago.

He, however, indicated that currently due to bush burning, the plant has become scarce except for a few of them that are available around the Navrongo area, but they are not in commercial quantities.

The Upper East Regional Director of the Environmental Protection Agency (EPA), Mr Asher Nkegbe, stated that the persistent destruction of plant species due to bush burning needed to be discouraged.

He explained that under the Sustainable Land and Water Management programme,10 dams have been constructed in the five regions of the north and in order to protect those dams some plant and tree species such as the Vetiver grass and Mahogany have been planted in the catchment areas.

Mr Nkegbe further stated that another intervention being rolled out was the range land project, where between 30 and 38 hectares of plant species such as the Mahogany, Rosewood and some Vetiver grasses have been planted in the Upper East and Upper West regions.

Another worrying situation large-scale exporters complain of is the lack of credit facilities from financial institutions to grow the industry.

Key industry players say some of them have consistently approached the Ghana EXIM Bank, which was established to support exporters and importers but their efforts to get loans have over the years proved futile.

The Chief Executive Officer (CEO) of Paku Enterprise, one of the largest exporters of the baskets in the region, Mr Paul Akurugu, stated that his enterprise had for instance “applied for credit facilities a number of times but the bank failed to grant our request”.

Mr Akurugu, however, indicated that the basket industry, in spite of the challenges, was growing in leaps and bounds.

“My company which is the second largest exporter of baskets in this region employs an estimated 3,000 women weavers; additionally, my outfit has employed leather workers,” he stressed.

He said his enterprise had a leather work department with about 100 young men employed in that unit to add leather to the handles of the baskets to make them firmer and hence more durable.

He explained that owing to the difficulty in getting access to the dyes, he asked one of his employees to travel to Nigeria to purchase them in commercial quantities.

Mr Akurugu stated that there were prospects in the basket weaving industry in spite of the emergence of COVID-19.

“But for the COVID-19 pandemic, the business would have improved further in 2020 compared to previous years,” the CEO said.

“The situation is picking up now because there are growing demands to the extent that I now have more importers of my baskets from Japan and China; in fact, the market for our baskets is not dying anytime soon," he further expressed optimism.

An orphan and one of the youth beneficiaries of the Paku Enterprise, Mr Solomon Azure, stated that he was able to cater for his education up to the tertiary level relying on the basket weaving industry.

He said some of his colleagues had also accomplished their education dreams through the same industry while others also built houses and bought motorbikes through the basket trade.

In 2019, the Paku Enterprise generated about US$1.4million from the export of baskets to countries such as the United States of America and Australia. In 2020, the figure shot up to US$2 million and this year the target for the company is to rake in US$2.5 million.

Checks from the Ghana Export Promotion Authority (GEPA) revealed that Ghana's non-traditional export sector, under which the basket weaving industry falls, contributed about 20 per cent to the country's export trade.

The Bolgatanga basket export sector is increasing its sales to key markets such as the United Kingdom, US, Australia and New Zealand.

Furthermore in 2017, Ghana exported roughly $800,000 worth of baskets to the international market, while a lot of countries are increasingly becoming interested in the country’s baskets.

The GEPA projected that by 2023, Ghana could double its supply of baskets to the export and international markets.

On the average, weaving one basket takes between two and a half to four days to complete. The basket making process begins by collecting the Vetiver grass.

The top of the grass stalk grows with broom-like flowers which are removed for weaving, known locally as “Kinkanhe” grass. When cut, the root is left in the soil to regenerate. The grass is then dried and trimmed to even lengths.

Next, the grass is soaked in water and then split in half. The split strands are then twisted in order to strengthen the grass. After twisting, the straw is untwisted and braided into bunches for dyeing.

The dye is mixed in boiling water. The grass can then be added to soak until the right colour is achieved. After the dyed straw dries up, the process of weaving can begin. Weaving begins at the base and works up the rim. The basket is then sent to a skilled leather artisan who adorns the handles with goats’ leather.

Baskets are the most preferred containers used by many women for shopping. The varieties of baskets include, the U shopper, round baskets, Hats, Fans, “Moses’ basket” or baby baskets, laundry baskets.

The other kinds of baskets are the pen baskets, pot baskets, mini baskets, dog baskets, V-shaped baskets, umbrella holders, fruit baskets and many more. Prices of these baskets range from as low as GH¢10 to GH¢500 depending on the sizes, quality and attractiveness of the baskets. A floor mat for instance goes for GH¢1,000.