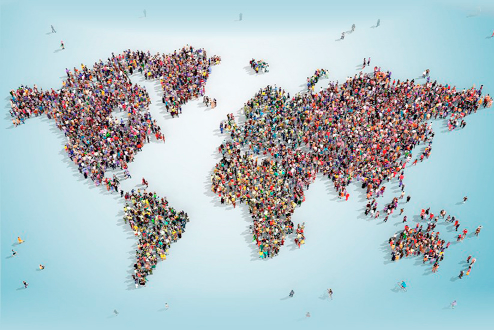 Population has implication for development

Every year, the world celebrates Population Day on July 11. World Population Day has the major objective of raising awareness of the importance of family planning, gender equality, poverty, maternal health and human rights.

It was established by the Governing Council of the United Nations Development Programme (UNDP) in 1989.

The event was with the support of partners such as the UNFPA, UNDP and the media.

Figures released by the UN show that the population increases by about 100 million every 14 months.

With the current trend, it is estimated that in 2050, the earth’s population will hit 9.7 billion and will continue to rise to reach a figure of about 10.9 billion by 2100. This, of course, is more than double of the population of 1990.

It is also worth noting that more than half of the global population growth between now and 2050 is expected to occur in Africa. The population of sub-Saharan Africa is projected to double by 2050.

This year's World Population Day has the theme: “Rights and choices are the answer: Whether baby boom or bust, the solution to shifting fertility rates lies in prioritising the reproductive health and rights of all people."

It puts an emphasis on securing sexual and reproductive health for all. Back in 1994, the groundbreaking International Conference on Population and Development (ICPD) held in Cairo adopted a visionary Programme of Action (POA) aimed at safeguarding the health and rights of women and girls and to promote their empowerment.

At the Cairo conference, world leaders stressed the fact that universal access to sexual and reproductive rights, combined with proper family planning, was a precondition to the attainment of Sustainable Development 2030 agenda — the world's blueprint for a better future for all on a healthy planet.

Twenty-five years after the Cairo conference, in November 2019, the Nairobi Summit, also known as ICPD+25, was held in Kenya.

The summit celebrated the 25th anniversary of the Cairo conference, while at the same time working towards meeting the UN's Sustainable Development Goals by 2030.

The conference also reviewed significant progress made toward achieving the objectives of the ICPD agenda. On the theme ‘Accelerating the promise', the Nairobi conference was a nod to the Cairo commitments but added an exhortation that the world as a whole was falling behind in meeting some of those ambitious targets.

A great deal has been accomplished in the 27 years since the original ICPD conference. For instance, birth assistance has increased to 80 per cent and the number of women who have access to family planning in least developed countries has doubled.

Nevertheless, there is still room for improvement. The original POA from Cairo had called for countries to affect a reduction in maternal mortality by one half of the 1990 levels by the year 2000 and a further one half by 2015.

Sexual and reproductive rights issues continue to be a controversial issue across the continent and are at times even ignored by governments; however, we are obliged to remind all stakeholders that sexual reproductive health and rights issues are part of the larger human rights issue.

We can also not ignore the fact that the COVID-19 pandemic disturbed and staggered people, communities and economies everywhere.

Around the world, supply chains have been significantly disturbed, impacting the availability of contraceptives and heightening the risk of unintended pregnancy.

With the pendency of the COVID-19 pandemic, countries are on lockdown, health and systems are struggling to cope, sexual and reproductive health services are interrupted and gender-based violence is increasing.

This is the reason I entreat my colleague members of Parliament regardless of their political affiliation to play an active role shepherding laws and policies that are predicated on commitments made by member states and ratified by Ghana, following the Cairo and Nairobi declarations.

Ensuring sustained budgeting for the ICPD agenda is key to the role of parliamentarians.

Universal Health Coverage is a significantly big component of this conversation and sustained domestic funding will ensure a successful realisation of the ICPD promises in a timely and sustainable manner.

Meeting these needs will ultimately lead to a reduction in other sector bills such as health, education and security bills.

As a country, we need to demonstrate a high level of commitment to funding policies that will sustainably address adolescents’ reproductive health and rights and meet the ICPD agenda commitments that are intrinsic to already existing national development strategies.

This includes reducing unmet needs for family planning, an end to gender-based violence, greater responsiveness to the needs of young people and empowering women.

The writer is the Chairman of the Population & Development Caucus in Parliament.