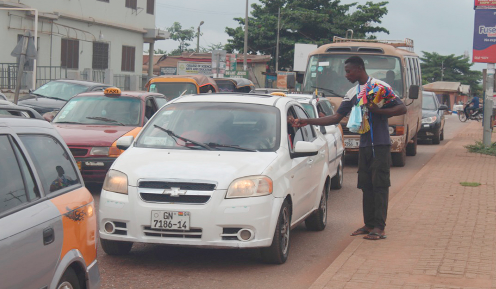 Sunyani, the Bono Regional capital, has been known to have serene and beautifully paved principal streets with streetlights which illuminate the town at night.

The free-flow of traffic within the town made it easy for residents to commute from one end of the town to another for their commercial transactions, while public service workers always had the luxury of reaching their offices without facing any traffic challenges, which are the daily occurrences in cities such as Accra, Kumasi and Tema, among others.

Such conditions, coupled with clean streets and gutters and the beautiful layout of the town which was devoid of trading activities on the shoulders of the streets, earned the town an enviable name as the cleanest city in Ghana.

However, Sunyani has in recent times expanded to merge with surrounding communities such as Abesim, Fiapre, Domasua, Wawasua, Kotokrom, Yawhima, Watchman, Asufufu, Adomako and Benu Nkwanta in order to accommodate the increasing number of people who have settled in the town to benefit from the upscaling of the town’s socio-economic activities.

The expansion of the town, coupled with the exponential growth of the population, has led to an increase in the number of both public and private vehicles and as a result, the hitherto free-flow of traffic is gradually giving way to traffic jams during rush hours and midday.

Others are the COCOBOD Roundabout-Main Station stretch and the street stretching from the Twene Amanfo Senior High Technical School to the Sunyani Municipal Hospital Traffic Light.

Sunyani has been well-planned to have both inner and outer ring roads to encourage drivers who have nothing to do in the commercial business district to use them to access other roads leading to the surrounding communities and to Berekum, Dormaa-Ahenkro, Sampa and Techiman, the Bono East Regional capital.

However, while construction of the outer ring road has stopped, not the entire stretch of the inner ring road is currently motorable.

Street hawking, which was unknown in Sunyani, is now prevalent because of the traffic jams which have become a daily feature in the town.

Those engaged in this newfound brisk trade include children, the youth and adults as they pack their items on the shoulders of the streets and move from one vehicle another to advertise them to commuters.

Some of the items they hawk on the streets include pastries, fruits, packs of toilet rolls, car accessories, soft drinks, drinking water, torch lights and sometimes pets such as puppies.

Asked whether street hawking was a profitable venture, some of the traders said on a good day they were able to get profits to cater for themselves and feed their families.

A 21-year-old street hawker, Ms Monica Dufie, told the Daily Graphic that she had been hawking on the streets for more than three years after dropping out of school due to financial challenges.

“Hawking on the streets has been my survival strategy and means of increasing my savings to venture into entrepreneurship,” she said.

Dufie, who sells toilet rolls and facemasks at the Penkwase Traffic Light said on a good day, she sells about GH¢200 worth of goods and makes about GH¢40 profit.

Another street hawker, Mr Emmanuel Gyamfi, who sells flags of various countries and football clubs said even though selling in traffic was not desirable, he had no option than to do so.

He explained that since there were no jobs in the system, it was better for him to find an innovative way to survive, hence his venturing into hawking.

“I am making huge sales here because I am not competing with many traders. We are few as compared to the various markets in the Sunyani Municipality,” Mr Gyamfi stated, adding that “I am hawking on the streets for a purpose and as soon as I achieve my goal, I will move out of here.”

Mr Gyamfi, however, admitted that hawking on the streets was a dangerous venture,as one could be knocked down by a speeding vehicle and advised his colleagues to be cautious and vigilant in order not to be killed by drivers who increase their speed to beat the red light.