This unparliamentary behaviour must cease! 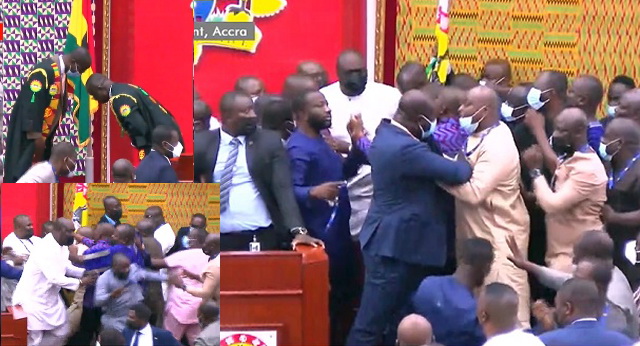 The events of January 7 and December 21, this year, in the Parliament House of Ghana have made the country a laughing stock in the eyes of well-meaning Ghanaians and on the international front.

The chaotic scenes that heralded the election of the Speaker of Parliament at the beginning of the year resulting in the Ghana Army storming Parliament to restore order was an aberration, to say the least.

If the events of January 7 was a shock to Ghanaians, then what happened in the chambers of Ghana’s parliament on December 21 was an affront to the sensibilities of decent members of the various constituencies who voted these MPs to represent them in parliament.

The brawl, kickboxing and karate session exhibited by the parliamentarians over disagreements on the E-levy must be condemned in no uncertain terms.

I do not want to wade into the argument over whether the E- Levy is beneficial or not to Ghanaians; it is up to the MPs to negotiate settlement of the matter in a more amicable and civil manner than what they sold out to Ghanaians and the prying eyes of the international community.

I concede that our parliamentarians are human and therefore susceptible to frailties and weaknesses associated with every human being, however, being in that enviable position as an honourable member of Ghana’s Parliament, we expect them to maintain cool heads even in the face of extreme provocation.

Let us not forget that Ghana’s democracy, even though young, is one of the best on the continent and even in the world. Our Fourth Republic has witnessed almost 30 years of smooth parliamentary democratic governance; the most enduring of all the parliamentary democracies in the country’s history.

The peaceful back to back transfer of power from one government to the other since the inception of the Fourth Republic is a jewel in our crown. In August this year, the Majority Leader, Mr. Osei Kyei- Mensah-Bonsu, was elected by the Executive Committee of the Commonwealth Parliamentary Association (CPA) as the Association’s Acting Vice-Chairperson and at the same time representing the CPA from the African Region.

This, certainly, is a great personal achievement as a Ghanaian MP, and an achievement for Ghana’s parliament. In this regard, one can only sympathise with the Majority Leader when he admits that the events of December 21 in the chambers of Parliament were not only ‘embarrassing’ but also ‘shameful’.

In October this year, Ghana’s Parliament proudly and successfully hosted the second extraordinary session of the Economic Community of West African States(ECOWAS) Parliament in Winneba, the first to be held outside Accra. These and many more such achievements place Ghana among the best of the best in everything within the sub-region and in Africa as a whole.

In the wake of this, it is incumbent on all current members of Ghana’s parliament to be decorous in conducting business in a more civil manner than what we witnessed this year. Disagreements could be resolved without daggers being drawn.

Taking entrenched positions on issues will only lead to stalemate and failure and Ghana will be the loser. The current composition of Members of Parliament in the chamber of parliament (NPP 137; NDC 137) leading to a hung parliament, is a blessing in disguise.

It presents an opportunity to improve on the negotiation skills between incumbents and the opposition; to make concessions and float new ideas around for consideration. What are some of the lessons learnt from this unfortunate incident?

For once, the hung nature of our current parliament and the resultant chaos that unfolded during debates on the floor of parliament means that ordinary Ghanaians can no longer be taken for granted by the majority caucus in parliament who in previous parliaments bulldozed their way through with their numbers during debates on critical national issues.

What this means is that the majority and the ruling party ought to swallow their ego and descend from their ivory tower in order to negotiate with the minority on critical issues of national interest. Once this is done, government business could be adopted and passed without much stress.

On the part of the minority, they need not be overly hardlined to impress their party faithful or put a spoke in the wheel of the majority unnecessarily to display vain sense of ‘machoism’. That could be counterproductive and may boomerang right in their face when the tables turn in 2024.

While playing the role of a watchdog, the minority must do so responsibly in holding the ruling government in check without risking grinding the entire nation to a halt by their actions. Recently, the Congress of the United States of America, after long painful debates and wrangling, passed the 1.2 trillion dollar bipartisan infrastructure bill which will enable the United States to develop and modernise their ageing infrastructure.

Even though it was as contentious and tense as our E-Levy, in the end, reason and civility prevailed over anarchy and fisticuffs. Theirs is a more mature democracy and we can only learn from them.

This perception may affect the chances of other up and coming young male Ghanaians who would want to represent their constituencies in the next parliament if such ignominious behaviour is ever put up by our Parliamentarians.

Don’t forget that the electorate in Ghana is growing more sophisticated and unpredictable each election year. A clear example is the hung parliament we have currently.

Thirdly, while it is admitted that MPs of both the majority and the minority in parliament hold the interests of their political parties in high esteem, being overly partisan and selfish at the expense of national interest plunges the country into a state of inertia.

The legislature should know that national interest should override partisan interest at all times notwithstanding their diverse partisan loyalties. The image of Ghana’s parliament is bruised and battered by their regrettable actions.

It was bad on January 7 and worse on December 21. In order to save face and repair their sunken image, it would not be out of place if the leadership of parliament (majority and minority) hold a joint press conference to render an unqualified apology to Ghanaians for inflicting such abhorrent and repugnant act on us.

This is a simple act of admitting fallibility and to show to all that our MPs are human after all. To this end, our ‘honourable’ Members of Parliament have the chance to redeem themselves on January 18, 2022 to do the needful and spare us the agony of witnessing another chaos when parliament resume sitting to tackle the vexed issue of the E-Levy. They cannot fail!