This advertising poster at exit of Kotoka International Airport is inappropriate 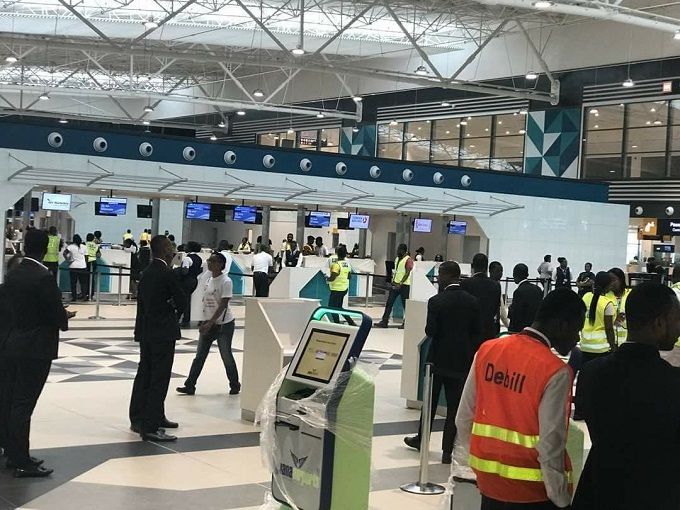 Never in my wildest imagination would I have ever thought that a sexual problem-fixing advertisement of any kind would be allowed to be sited at the precinct of an international airport of all places, more so at the main exit where ordinarily, a welcome message would have been more like it.

Yet, in a beloved country where we are proud claimants of being a gateway to many things, we seem to uphold the attitude of anything goes because well-crafted laws are only on paper. They do not bite. Any wonder we have been engulfed with impunities?

As a visitor’s first impression of the city of Accra and indeed the country, I was shocked the other day to see two inappropriate advertisements claiming to fix any sexual malaise, as well as enhancements for both men and women. Both adverts had been placed next to each other on one of the wire mesh fences protecting the flower bed just before the final exit to the traffic intersection that brings one to join the Liberation Road. The adverts could only be seen exiting the airport and not when entering. Was that done for a reason?

These adverts are in colour with images and daring telephone numbers ostensibly for prospective clients to make contact. For a place as strategic as our Kotoka International Airport (KIA), one would have expected on-the-minute monitoring and inspections within a certain radius for undesirable activities and or characters. Such an area should be kept spick and span with no room left for lawlessness and untoward behaviours. But that does not seem to be the case.

Being the last main exit from KIA, an “Akwaaba” or welcome banner with the Ghana flag would have been the most appropriate at that strategic position and not any other inappropriate advertising of a so-called sexual clinic. It makes one wonder whether at such a sensitive zone anyone audits on a weekly or monthly basis what is up and about.

One knows for sure that city authorities do charge fees for advertisers or their agents to mount their adverts in public spaces. Moreover, to sanitise our public spaces, the Accra Metropolitan Assembly for example, recently issued an ultimatum to advertisers and their agents to remove all unauthorised adverts and posters from exposed public spaces, including roads, buildings and electricity poles. Whether there have been inspections and monitoring since the ultimatum expired and the sanctions they professed applied, one does not know because one still sees the littering of public spaces with adverts and posters and that includes this inappropriate one at the main exit of KIA.

If as citizens we are all expected to be responsible for keeping our cities, towns and villages clean and tidy, then these are some of the things one would like to bring to the notice of the authorities who are responsible for maintaining sanity and order to take immediate action against defaulters. They may not be at all locations at the same time and that is why these authorities should appreciate citizen alerts and be swift with investigations, issuing strict punitive measures where appropriate as a deterrent.

Luckily, in the case of those inappropriate adverts at the exit of the KIA, both adverts carry telephone numbers. The advertised numbers, therefore, should help the city authorities zoom in on who the audacious advertiser is and deal with him or her.

Unless we begin to take swift and decisive actions against inappropriate behaviours and actions, one would never see an end to the impunities our society has been bedevilled with. However, if the advertiser paid for putting his or her poster at such a strategic location, then the public needs to know which official thought it was appropriate to welcome guests and returnees to the country in such a manner.

We need some decency and order around us and those bent on doing what they like should be made to know that our laws do indeed bark and would bite deeply into the skin when trespassed upon.