The US Capitol siege was no 'third world country' crisis, but a uniquely American monster 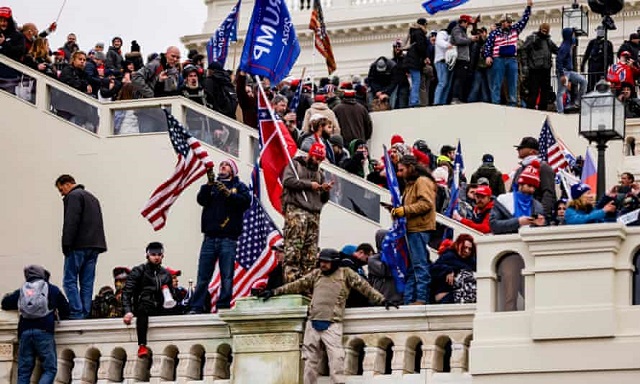 The events that unfolded in Washington DC on Wednesday are not the same as what happens elsewhere, in countries often referred to as "third world" or "developing" or "over there." Those are places where, lest we forget, the United States has often meddled or invaded under the auspices of bringing democracy.

Sure there are superficial similarities in the videos of rioters storming the US Capitol and, say, the moment that Shiite protesters stormed Iraq's parliament back in 2016. In Iraq then, the protesters were up in arms over parliament's deadlock over the formation of a government and were demanding a reshuffle of a proposed cabinet. They were largely supporters of radical Shiite cleric Muqtada al-Sadr -- egged on and incited to protest by him.

Take a shot of tear gas and flash bangs from DC and you can draw a superficial comparison with Libya, when armed gunmen loyal to renegade general Khalifa Haftar stormed parliament in 2014; a bit of a stretch, but even to Kabul in 2015 when the Taliban launched a deadly attack on parliament; Egypt in 2013 when a popular coup removed Mohamed Morsi from power.

But what's happening in America is uniquely American. It is that country's monster, just like the monsters elsewhere (often allowed to exist, it should be mentioned, through support -- overt or covert -- from the US and the West) are unique to the nations where they exist.

Most Americans are horrified and disgusted by what has transpired, to see an attempt to have their democracy stolen from them, nearly ripped to shreds, the future uncertain, and propelled by lies and fiction propagated by the highest seat of power.

There has been a brief glimpse of the fear and violence that grip other countries' populations who are fighting and dying in the name of democracy and freedom. A glimpse of how quickly what one takes for granted can be destroyed, how frail the fabric of society really is, of how a fringe and violent minority can overtake the narrative.

America used to have a moral standing, or at least the facade of one. It's one that has been eroded over the years, even before the Trump era, with its more recent history of the invasion of Iraq under fabricated pretenses, the locking-up of alleged terrorists in Guantanamo Bay without due process, the continued support of dictators, monarchies, and autocrats when it's in America's interests.

The Trump era ripped back the veil, to reveal the ugliness within the US itself, one that America can no longer ignore, but has always existed. The truth is embodied in the killings of black Americans, in police brutality and the systemic racism; it's shown in the reaction to the Black Lives Matter movement, MeToo, the rise of white supremacy. And those who oppose that ugliness are fighting for what they believe is the very soul of their nation.

The concepts on which we have built our societies are fragile, more so than many of us want to accept.

Let's not look down any longer on nations whose people are fighting and striving for democracy with a moral superiority, but instead with understanding and empathy.