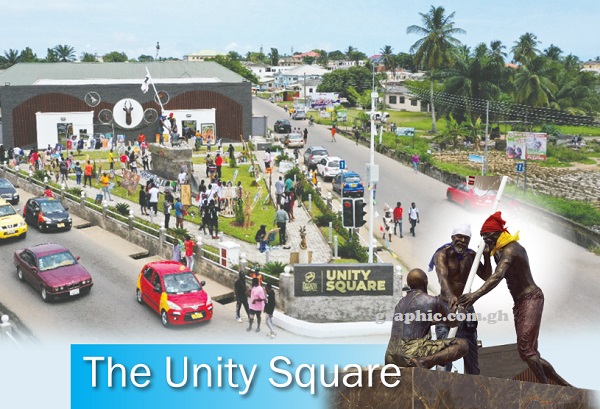 The Unity Square is a multi-purpose centre in Winneba located at the popular Y-intersection which is the gateway to the older southern half of Simpa in the Central Region.

Though it is called a square, the place is strategically positioned within the Y space of the intersection forming a triangular shape just around the only traffic light in the town.

The Square is one of the aesthetic transformations of the landscape of Effutu that have been undertaken for Effutuman through the initiative of the New Patriotic Party Member of Parliament (MP) for Effutu, Alexander Affenyo Markin and the Art Department of the University of Education, Winneba (UEW).

It has beautiful artworks and sculptures that people go to admire the and just take pictures.

Before the establishment of the Unity Square, the space was deserted, weedy and displayed all forms of notices including obituaries and political posters.

As part of his Effutu Dream Project, Mr Afenyo-Markin, commissioned the facility in 2018 to enhance beautification of the landscape in Winneba to attract people to the area, improve tourism and more importantly, promote peace and unity among the people of Simpa.

On Tuesday, October 19, 2021, the Unity Monument (statue), which stands in the middle of the square, was unveiled by President Nana Addo Dankwa Akufo-Addo.

The monument depicts three men - two standing and the other kneeling - erecting the flag of Simpa.

A lecturer at the University of Education, Winneba, Dr Theophilus Mensah, who produced the monument explains that each of the two men standing represents one of the two Asafo companies, while the third represents a mediator who is assisting the factions raise the flag of Simpa.

The statue thus projects a simple dual narrative of living in peace and unity on one part and unity in development on the other.

Aside from the beautification of the town, the Unity Square and Monument are projected as the permanent conflict resolution symbol and hope for unity in Simpa.