The new kid on the block; We don’t know what we have created 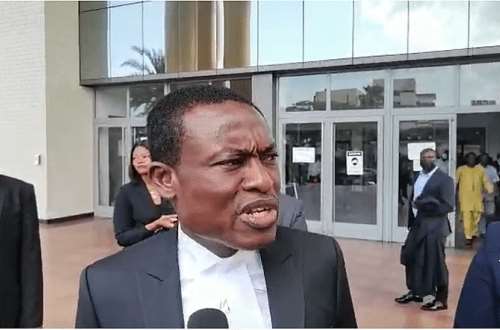 1. Arguably, the Office of the Special Prosecutor (OSP) is the youngest Law Enforcement Agency to be created but the one with the most extensive powers. It appears the law maker looked at all the deficiencies in the existing agencies and fortified the OSP with it. Some even don’t know the Office has police powers.

2. It’s been close to five years (5) since it was created but was never really set up till August 2021. Even its set up has been slow due to lack of resources and staff. So it’s understandable that there is a lot of misconceptions about what it is, its objects, its powers, what it can do, what it cannot do. A lot of people both lay and legal brains have not really read or averted their minds to OSP laws and enabling legislations (Act 959, L.I. 2374 (Operations regulation).

3. Same applies to public and civil servants and bureaucrats and politicians about (L.I. 2373), what that Office is entitled to legally and needs to set up.

4. I remember the Special Prosecutor (SP) in one of his encounters with the public told a story about how some lawyers and their client were intimating that he cannot ask their client to declare his income. You see under the OSP law and L.I, the SP can ask a person be it charged or under investigations to declare his or her property and income and serve that person with forms 11A and B. Any asset or income the person refuses, neglects and or hides but the OSP can establish by evidence that it is for the person, that person automatically forfeits all that he did not declare. Secondly, failure to fill the forms is a criminal offence and punishable separately.

5. In fact, a reliable source tells me Senior Police Officers once remarked whether the OSP has power to investigate the police. Oh Yes-the OSP can, provided the conduct in question falls under corruption and corruption related offences.

6. I am certain as the OSP has started sending some cases to court and investigating several cases and as courts make pronouncements and lawyers defend clients - in no time the OSP laws will be fully developed, read and understood. It’s a process.

7. Now let me turn my attention to the elephant in the room: Can the OSP investigate the assets of a dead person. A loud Yes.

8. Such an investigation is not focused on the dead man - but on the assets of the dead person; whether it was acquired lawfully or not.

9. You see Ghana is signatory to the United Nations Convention against Corruption. As a dualist state Ghana has not only ratified the Convention but passed it into law in the Form prescribed in Act 959 and its enabling L.Is.

10. At the heart of this convention and subsequent declarations is something called non-conviction-based forfeiture (NCB). It helps Law Enforcement Agencies (LEAs) to forfeit the assets of a person who cannot be tried because they are either dead, unknown, missing or immune from prosecutions.

12. Non-conviction based asset recovery, on the other hand, looks to the forfeiture of corruptly acquired property where it is impossible to convict the suspect – as for instance, where the suspect is missing or has absconded; or immune from criminal prosecution; or dead.

14. This is the first time an LEA is going after the asset of a dead person who has or was not charged nor convicted of a corruption offence before his demise. It’s novel also because as I said the OSP just started operationalising. The OSP Act, Act 959 gives the SP power under section 38, 39 and 40 to freeze the assets of anyone dead or alive that he is investigating if he has reasonable grounds to believe the asset may have been acquired through unlawful means.

16. The law provides that after 14 days the SP shall apply to the court for confirmation of his orders and the Court SHALL confirm up to a period of 12 months if it is satisfied under the grounds listed in section 40;

(a)the respondent is being investigated for corruption or a
corruption-related offence:

(b)the respondent is charged with corruption or a corruption-offences

(c) there are reasonable grounds to believe that the property is
tainted property;

(d) the respondent derived benefit directly or indirectly from
corruption or a corruption-related offence;

(f) there are reasonable grounds to believe that a confiscation
order shall be made under this Act in respect of the
property.

17. While section 54-, in fact section 50 to about 60 is about application for confiscation order or pecuniary penalty order, Section 54 specifically provides in part as follows:

Procedure against property where a person dies or absconds
54. (1) The Special Prosecutor shall apply to the Court for a confiscation order in respect of tainted property if the person from whom the property was seized

(a) is on trial for corruption or a corruption-related offence; or

(b) is convicted of corruption or a corruption-related offence
but dies or absconds.

18. So section 38-40 is about freezing orders and confirmation of same whiles section 54 is about confiscation order when a person dies after being convicted or charged.

19. I have heard some argue that section 40 does not mention a dead person and so OSP cannot freeze the asset or even investigate the asset of that person. I respectfully think it’s a shallow view of the OSP Act and why it was even created.

20. Nowhere in the ruling of the High Court sitting in Accra, which was read verbatim in court does the court suggest OSP lacks the power to investigate and freeze the asset of the dead person.

21. The contention of the Court as was read fully in Court is that OSP should have commenced the application together with Section 54 of its Act.

22. The argument of the OSP is that, they are not in court to confiscate the assets of the estate of the deceased. They are in court for a confirmation of its freezing order it issued two weeks ago so that the estate may not be dissipated after investigations are done. And that section 54 is for confiscation after a person has been charged and/or convicted.

I will end it here, I have to go and find daily bread.