The Ghanaian story, sixty-four years on 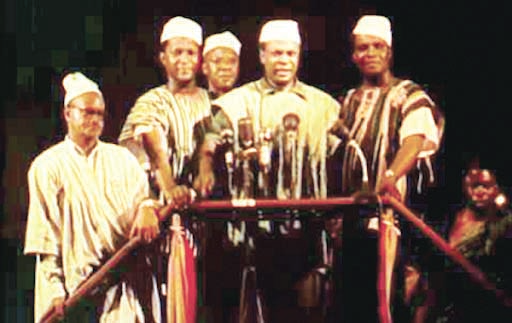 • Dr Kwame Nkrumah (middle) at the declaration of independence at the Old Polo grounds in Accra
30.5k Shares

On March 6, 1957, this country stood on the brink of a new dawn heralding a freshly minted independent Ghana, following Dr Nkrumah’s rousing proclamation at the Old Polo Grounds in Accra earlier at midnight. The Gold Coast had given way to Ghana.

The British flag, the Union Jack, had been lowered, and in its place the new Ghanaian flag had been hoisted, fluttering majestically in the night breeze.

I have seen moving clips of excited citizens dancing and making merry on Independence Day, proud of their country and what it had achieved.

The new country, the first sub-Saharan African country to attain independence from colonial rule, was certainly an inspiration not only to African countries still under colonial bondage, but also to black people across the world, particularly those in the United States who were still battling out civil liberties issues with the state.

In his seminal book ’There Was a Country: A Personal History of Biafra’, the celebrated Nigerian author, the late Chinua Achebe, had this to say: “Ghana was a particularly relevant example for us subjects in the remaining colonies and dominions of the British Empire.

There was a growing confidence, not just a feeling, that we would do just as well parting ways with Her Majesty’s empire. If Ghana seemed more effective, as some of our people like to say, perhaps it was because she was smaller in size and neat, as if it was tied together more delicately by well-groomed, expert hands.”

Today, many would chuckle at Achebe’s statement.

So how did it come about that 64 years on, the common narrative is that the pretty, radiant bride has not aged gracefully and is a pale shadow of herself and what promise she held in those giddy early days?

Our problems and challenges are totally avoidable but for poor leadership over the years at all levels, primarily.

How can we be proud of the state of our public schools and hospitals today, together with the quality of education and healthcare that they respectively provide?

How come people share dirty streams with animals while others use treated water to nourish their lawns and wash their cars? Too many of our countrymen live in filth and squalor, condemned to a lifetime of poverty and deprivation, living as outsiders in their own country that is awash with natural resources.

An increasing number of our youth, including university graduates, comb the job market in despair and frustration, with its attendant risks of social implosion.

Our country suffers from systemic corruption that is costing us a fortune, and many state institutions are too weak and compromised to deal with it in any meaningful way.

In spite of all these rather depressing indicators, I believe there is another side to the Ghana project that is redeeming.

After all, our elders say no matter how bitter your gum tastes, your tongue has no other gum to lick.

We have come a long way since the politically unstable periods that blighted our growth as a nation.

We have in the past lurched from one-party dictatorships to assorted military juntas and revolutions, with pockets of multiparty politics and near experimentation with Union Government in tow.

Yet, over the past 28 years or so, with the advent of pluralistic politics, we have been able to rule ourselves without the violent baggage of the past. Granted, there are many shortcomings with our democratic experiment, but we are still growing.

We have seen incumbent governments lose an election and hand over to the opposition peacefully, and our presidents have not sought to manipulate the constitutional, maximum two-term limit imposed on their tenure. That is somewhat a miracle on the continent.

Whenever the National Democratic Congress (NDC) or New Patriotic Party (NPP) is in opposition, it is vibrant and gives the government a good run for its money.

We have a generally free, robust press and our human rights record has vastly improved, with still some way to go. We are able to demonstrate peacefully and say our minds in the media and on other platforms without fear of a dreaded knock on our doors in the middle of the night to cart us off to cold, damp military cells and held without trial.

It is easy to take your liberty for granted if you have never been deprived of it.

Like many other African countries, ours was cobbled together by the British from different ancient nations to form a modern nation-state.

Despite some ethnic clashes and some simmering tensions, Ghana has been able to hold herself together and steer clear of the destructive ethnicity induced civil wars that have devastated other countries, whose citizens have subsequently fled to our country to seek refuge and rebuild their lives.

That should count for something. Yes, too many people struggle to afford to make ends meet on a daily basis and the grinding poverty is real and unacceptable, but we have come away from the humiliating drought and famine of the 80s with its ‘Rawlings Chains’ and the ‘Kalabule’ years of the 70s when you could not find basic goods to buy even if you had the money.

Inflation, which stood at 116 per cent in the early 80, is now relatively stable.

We have travelled a pot-holed, bumpy road over the years, with sharp hair-raising bends, but thank God the bus is in one piece and still on the road. Progress has been slow, but we cannot afford to be at a standstill.

A nation does not grow overnight. As my friend Nana Awere Damoah often says, while Rome was not built in a day, it was built every day.

We are a young country - in fact a toddler in the scheme of things compared to other modern nations, especially in Europe, but that is no excuse, especially when we do not need to reinvent the wheel in many aspects.

We dare not give up on this country, because it is all we have. We must see the glass as half-full rather than half-empty and resolve to leave a solid legacy for those who would be celebrating Ghana’s centenary in hopefully more prosperous times.