The 1992 Constitution - the structural foundation of our democracy 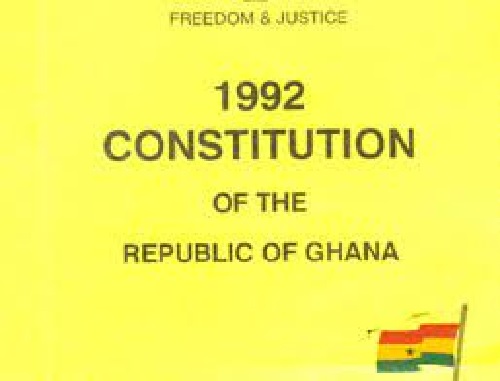 For 30 years now, the Fourth Republican Constitution has been the basic rule book for the game of Ghanaian politics.

Its rules apportion power and responsibility among government branches.

They define the fundamental nature of the relationships among governmental institutions and specify how individuals are to be selected for public office.

They also specify how the rules themselves may be changed if it becomes necessary.

Every aspiring politician who wants to attain office, every citizen who wants to influence what government does and every group that wants to advance its interest in the political arena must know the rules and how to use them to their best advantage.

Because the Constitution has this character, we understand it to be the fundamental structural factor influencing all of Ghana’s political life.

Like all rules, however, constitutional rules can and do change over time.

Their tendency to change over time is why some people speak sometimes of a “living Constitution.” Constitutional changes come about in three specific ways.

One is formal amendment prescribed by the Constitution itself.

In practice, formal amendment to a constitution is a difficult process yet it can be achieved.

Secondly, the Constitution can also be changed by decisions and interpretations of the Supreme Court found in the written opinion of the justices.

Such action is justified on the grounds that the Court has and must interpret the Constitution in the light of changing circumstances that the framers could not have envisioned.

The third means of change to the Constitution happens through changing political practices which end up serving as precedents for political actors.

We have witnessed several of such changes since 1992 ranging from transition from one government to the other, parliamentary practice and procedures, holding party primaries and conventions to select candidates for political offices among others.

The current drama in Parliament can end up in compromises and consensus that will serve as a precedent that will guide certain actions in future.

In the Constitution, the framers designed a framework for a government of separated powers and checks and balances.

By that, it means that the framers divided executive, legislative and judicial powers and placed them into separate branches of the national government.

While the framers situated a set of unique powers within each, they also gave each branch an important role in the affairs of the other branches in a bid to preventing anyone of them from becoming too powerful.

Giving legislative power to Parliament but requiring that a bill be signed by the President for it to become law is one example of such constitutional design.

As one might expect, a system of separation of powers, checks and balances is potentially rife with conflicts.

The current Constitution has been around for 30 years now.

Over this period, it has given birth to five different Presidents all playing under the rules to ensure that government operates smoothly to bring progress and development to the people.

Thirty years is relatively a long period of time.

Over the same period, some have observed structural weaknesses that need reinforcement through formal amendment.

Every structure that serves as a foundation for which any development is built reduces in strength with time.

For over 30 years, the 1992 Constitution which many describe as one of the best constitutions in the world has served the nation well.

At the same time, many observers have an issue with some of its provisions.

Key areas have come to the fore as target areas for possible amendments.

These include the powers granted to the executive arm of government, proper demarcation of the boundaries between the separated arms of government and the winner takes all character of our democratic practice.

As stated earlier, a formal amendment to a constitution is very difficult to achieve, yet possible.

As times change, the Constitution should reflect such changes that have taken place within the 30-year period to make it truly a living constitution.