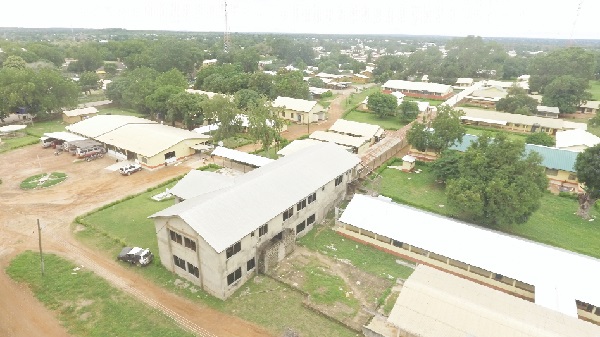 An aerial view of St Joseph's Hospital in Jirapa

The Roman Catholic Church has had a lot of cordial relationship and good influence on the socio-economic development of the Upper West Region.

Besides churches, the Catholic Church is also responsible for the introduction and establishment of many projects in the educational and health sectors of the region.

The Catholic Church offered help to design the curricula for the training of young people with skills and knowledge to enhance communication with natives and clients at the established institutions such as the Saint Joseph's Hospital, Nurses' Training College, Midwifery College and St Francis of Assisi Senior High School as well as first cycle schools in Jirapa.

The Jirapa Municipality is one of the 11 municipals and districts in the region and used to be part of the Jirapa/Lambussie District in 1988, until the district was later split to create the Lambussie /Larni and Jirapa districts on February 29, 2008.

Jirapa was later elevated to municipal status on March 15, 2018. The Jirapa Municipality is located in the north western part of the Upper West Region with agriculture as the backbone of its economy, engaging about 80 per cent of the people.

The St Joseph's Hospital at Jirapa, the capital town of the Jirapa Municipal District, currently serves a population of about 110,000 people and remains one of the many facilities provided by the Catholic Church.

The hospital was the brain child of the Franciscan Missionaries of Mary in 1949 as a wound -dressing centre operated by the missionaries, which was later converted to a hospital and absorbed by the government after independence.

It is one of the facilities in the region which has instituted important and far-reaching measures that are improving maternal and child healthcare delivery.

An opinion leader, Mr Martin Yiripare, who acknowledged that he was born at the hospital said that the facility had become synonymous with Jirapa and it was patronised by people of other regions, districts and even beyond the borders of the country.

A mother of two children resident at Jirapa, Ms Cynthia Danbolinaa, who has benefitted from the services of the hospital commended the staff for treating each patient with the same care without considering the status of the individual person.

"They have patience for everyone and during delivery, they monitor you well and ensure that you deliver and go home happily. They have also embarked on an intensive educational drive to create awareness among pregnant women on the need to attend antenatal clinic regularly to ensure safe delivery," she said.

Ms Danbolinaa said, because of that all pregnant women made the facility their number one choice to have their babies delivered.

This year, the St Joseph's Hospital has taken a bold decision to drastically reduce maternal and child mortality with the technological innovations acquired by the staff. A number of cross-cutting measures that have been instituted led to zero maternal deaths as of the first half of the year.

According to a Senior Midwife, Reverend Sister Clothilda Nen-nome, management had to adopt far reaching measures to attain the zero maternal mortality from 2018.

These included the use of tricycles to convey the pregnant women from the rural areas to the hospital in the absence of an ambulance, prompt response and attendance by staff and medical officers who responded quickly whenever emergency cases were involved in the hospital.

Apart from that, there is an online platform for all midwives at the district and sub-district levels, from which references can be monitored to solve medical cases as they come for further management.

She said, above all was the motivation by the management, which went a long way to induce dedicated services from staff.

The Acting Medical Superintendent of the hospital, Dr David Aboagye, said on the average they recorded a daily attendance of 150 people at the out patients’ department of the facility and that great effort was being made to refurbish the neonatal intensive care unit and maternity ward, to enhance health care services in the district.

In an interview with the Daily Graphic, Dr Aboagye pointed out that both antenatal attendance and deliveries were free and urged the women to take advantage of these health care services and attend clinics regularly to avoid complications.

He appealed to benevolent institutions and individuals to come to the aid of the hospital with logistics and equipment, such as blood pressure apparatus, weighing scales and thermometer guns among others, to improve health care delivery.

For his part, a Medical Officer at the facility, Dr Theophilus Ben Sabi, told the Daily Graphic in Jirapa, "We have identified four types of delays that caused pregnant mothers to lose their lives. These are delays in recognising the need to visit the hospital, delays in reporting after eventually recognising the need to visit, delays in health personnel being available to assess conditions and delays in medical interventions.

"Any of these or a combination of them contributes to maternal mortality in the municipality," Dr Sabi added.

He said, having identified the challenges, officials of the hospital had instituted remedial measures, since health was wealth.

The first was public health education, which was a collaboration with the District Health Directorate, especially with the public health staff and midwives in the district.

The messages covered the need for pregnant women who noticed bleeding or loss of fluids from their private part when approaching delivery time, to report to the nearest health facility.

"We have midwives who are close to the pregnant women in the municipality actually doing well by going out to carry out such public education. You mostly don't see this in the urban areas but here in the rural areas, it happens a lot," Dr Sabi explained.

Getting a means of transport to the hospital too has proven to be a challenge without an efficient ambulance service in the villages and towns in the municipality.

To resolve the issue, some communities have designated some drivers who could be called upon when the need arose to send an expectant mother to the health facility, no matter the time of the day. The hospital has also seen the number of medical officers, increase from three, two years ago, to six.

Dr Sabi said, with the laborious nature of attending to maternal cases, which was a 24-hour course, the coming of additional doctors had been a great relief as it had allowed the doctors to take a respite to rejuvenate for better health service delivery.

The increase in the number of doctors has also accelerated the interventions. With the hospital's early referral system many lives are also saved.

"We also have a 24-hour well-functioning laboratory, where there is always someone. Should a woman require blood transfusion, we are quickly able to organise blood from the blood bank which is part of the laboratory, to administer to the patient," he said.

"The theatre, which although has only one anaesthetist, also runs well and supports the interventions for saving the lives of pregnant women and other health-related cases. The hospital is training more anaesthetists," he said.

"This year the referrals have been very good. Most of the cases come early. We have a feedback from that and we get back to the referral facility so that they see what we do for the clients they refer," Dr Sabi noted.

“This also serves as a knowledge sharing process to enable them to know what interventions are required should similar cases present, " Dr Sabi added.

With these systems in place, saving the lives of people with critical conditions with slim chances of survival is now a norm at the hospital.

In the first part of the year, the hospital saved a woman who was on the brink of losing her life to bleeding after delivery, one of the major causes of maternal mortality.

Referred from a facility with a tear in her private part, she had bled for some time and looked pale. With a functional laboratory, the medical staff quickly organised blood and plasma, which was administered while medical officials sutured the woman.

After about five hours of frantic interventions, the mother survived, Dr Sabi recounted.

He said the community had been of great support in the interventions, adding that "the hospital would ensure it moved diligently in the same direction since it had proven effective."