The Republic of Colombia is fast becoming an ideal destination for foreign tourists. Over the past five years, the country’s visitor rate has risen by 72 per cent, measured by both immigration checkpoints and cruise ship arrivals.

Visitors arriving from the United States of America, Venezuela, Argentina and Ecuador  form close to 45 per cent of total number of visitors and continue to be important contributors to the Colombian economy. Colombia climbed 21 places, from 50 to 29, on the International Congress and Convention Association’s (ICCA’s) ranking of international events between 2000 and 2012. It offers an important array of beaches and its location advantage, with regard to the Caribbean and Pacific coasts, is ideal for surfing, fishing, rafting and regattas.

Within Latin America itself, it is known as the most business-friendly country. Columbia is positioning itself as one of the major destinations for events and business meetings. The UNESCO has also recognised 13 cultural heritages of humanity sites in Colombia and in 2011, the cultural coffee landscape was added to the list.

The Colombian Ambassador to Ghana, Madam Claudia Turbay Quintero, disclosed this to the Daily Graphic in an exclusive interview prior to Colombia’s National Day, which falls today.

She noted that Colombia, which is strategically located within five different time zones, shared one of these with important and central business hubs including New York, Miami and Toronto. It finds itself at the heart of the northern hemisphere’s major commercial and financial centres, both in North and South America.

The ambassador said Colombia had 12 trade agreements with over 20 markets, which allow the country to have tariff advantages for exporting to these markets with highly competitive rates as well as logistical advantages. She said Colombia’s world exports grew from US$56.9 billion in 2011 to US$60 billion in 2012.

Air connections for cargo transport from Colombia were also covered by 32 airlines, with cargo quotas operating on more than 1,700 export routes with access to some 400 cities around the world, she noted.

She said more than 22 airlines, both cargo and passenger-based, flew to the country, which boasts over 700 direct, international frequencies and above 4,900 domestic frequencies every week.

The country is situated on a focal point of maritime activity and is close in proximity to the Panama Canal and this contributes to its ports mobilising 127 million tonnes of cargo and receiving close to 25,000 vessels, via the Atlantic and Pacific Oceans.

Madam Quintero, whose embassy has operated in the country for two years, said within the period, there had been a high level meeting between President John Dramani Mahama and the Colombian President, Juan Manuel Santos, in Colombia. The Minister of Foreign Affairs, Ms Hannah Tetteh, has also visited the country.

She said 400 visas had been processed for Ghanaian and Nigerian citizens, as well as people from other parts of West Africa, for tourism and conferences.

Six Ghanaian youth from rural communities have also visited Colombia as part of the Junior Ambassadors Programme organised with the African Union Diaspora Forum in Ghana.

Madam Quintero mentioned Colombian products and said the Noel brand of Super 2 Cookies had been sold at the Makola Markets and would expand to supermarkets in Accra. She noted that tiGO and Surfline Ghana, for instance, had Colombian engineers. 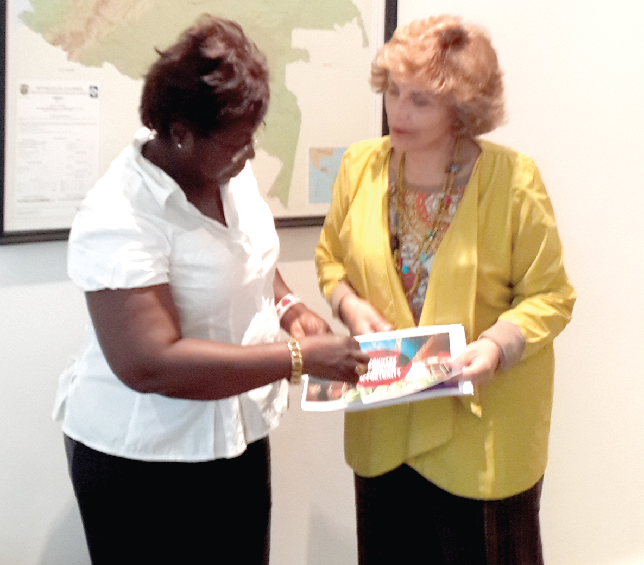 A memorandum of understanding (MoU) has been signed for the teaching of Spanish as a foreign language course. Fifty diplomats and officials benefited in 2013 and 50 more government officials and diplomats are attending the course.

The ambassador said a number of MoUs were yet to be signed and mentioned those of the Ghana Immigration Service and Migracion Colombia; Political Consultation; and Drug Trafficking with NACOB.

Touching on the Colombia National Day, she emphasised the importance of the common interests and roots of her country and Ghana, as her country marked its national day today.

She cited the common coincidences in names such as Chorkor and Elmina in both countries, which shared similar interests in culture, music, art, drumming, dancing, sounds and history, and said her country more and more found its roots in Ghana because of the African spirit and integration.

The ambassador said the national day, for instance, was being held at the W.E.B. Du Bois Centre to emphasise the importance of the centre because of its Pan Africanism spirit.

The country is located in the northwest of South America and is the only country on this part of the continent with both Pacific and Caribbean coasts. It is bordered by Panama, Venezuela, Brazil, Peru and Ecuador and shares maritime boundaries with Costa Rica, Nicaragua, Honduras, Jamaica, the Dominican Republic and Haiti.

It is a young and dynamic country where 55 per cent of its population is under 30 years of age. Its total population is 51 million, with a literacy rate of 99 per cent.