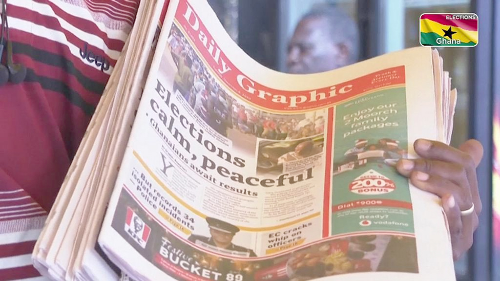 It is an undisputable fact that the 2020 election was one of the most organised and peaceful polls Ghana has ever had since the advent of the 1992 Constitution.

Yet it was one that also recorded the deaths of eight persons and the legal tussle over nine parliamentary seats.

As a country, we take great pride in being a shining example of democracy for many African countries.

Thus, going into future elections, never again should we allow even one soul to perish.

The 1992 Constitution enjoins us to elect our leaders every four years in the general polls.

While honouring this constitutional provision, we should be mindful of the fact that even though elections have a conflictual nature due to the competition for scarce resources, elections should not become grounds for intra-party feud, blood shedding and wanton destruction.

Unfortunately, the conduct of every election in Ghana comes along with increasing anxiety and fear of political tensions.

It is important to note that elections often stir up forces of ethnicity, religion and rivalry, all of which threaten national unity and cohesion.

Elections have great potential for triggering violence, but if such violence is caused by unfairness of the electoral process, then it is unfortunate to say the least.

Ghana’s electoral system has come a long way from the days where elections were plagued with so many irregularities, including the snatching of the ballot boxes from the polling stations, physical assaults and evidence of ballot box stuffing.

Today, ours is the best tried and tested electoral system and many African countries have come to understudy our success stories. Let me be quick to say our electoral process is anything but perfect. There is no such thing as a perfect system. Even the United States of America, the most mature democracy in the world, cannot lay claim to a sacrosanct electoral system.

Every election seems to bring up new challenges for electoral reforms. For instance, the collation of the polling station results at the collation centres became a source of disputes leading to the death of eight persons in the 2020 elections. This is regrettable!

This in no small way has dented our democratic credentials. Let us resolve that never again should our compatriots die in an election.

The election management body must be fair and firm in its dealings with all stakeholders.

Can we say in all honesty that right from the compilation of a New Voters Register, to the declaration of the final elections results everything went well for the 2020 elections?

Or is it enough to say once the elections meet the highest standards of the outside observers it does not matter whether it meets the satisfaction of the electorates, who line up in the scorching sun to cast their vote?

Elections should not be seen as mere window-dressing rituals just to please outsiders.

All the concerns and views of stakeholders must be taken into consideration in order to build consensus on national issues.
It has been said that to have free, fair and credible elections, it is not what we do on the election day alone but what we do before, during and after elections.

It is only fair that the 2020 election is also viewed against the loss of human lives and legal battle over some parliamentary seats in the country.

Going forward, it is important for the relevant stakeholders to offer constructive engagements to the Electoral Commission (EC) and the opposition National Democratic Congress (NDC) to iron out any seeming frosty relationship between them.

It is not healthy for our democracy for the two important stakeholders to be at each other’s throat engaging in claims and counter claims of the success or otherwise of the 2020 elections.

And also, the death of the eight persons in the 2020 election should not be swept under the carpet. It must be investigated to get to the bottom of the unfortunate incidence so that perpetrators are brought to book and families of victims compensated.

The writer is a Freelance Journalist.
E-mail: This email address is being protected from spambots. You need JavaScript enabled to view it.