BY: Arku Jasmine
Category: Features
An event does not cease to be an event because the media choose to ignore it.  Nor do the people and events highlighted by the media necessarily leave any marks on history.  Mrs Indira Gandhi. Follow @Graphicgh

Thomas Carlyle has submitted that, “no great man lives in vain.  The history of the world is the biography of great men”.  There is also an Irish proverb to the extent that, “you have to do your own growing no matter how tall your grandfather was”.

President John Dramani Mahama did the honourable thing by ordering the Accra Metropolitan Chief Executive to rescind his scramble to confer honour on the late President John Evans Atta Mills, and for openly acknowledging that the act was a sad mistake arising out of overzealousness.  But, the inordinate act could have been nipped in the bud.

Dr  Alfred Oko Vanderpuije may have acted in good faith to reward Prof. Mills for bringing him from obscurity to popularity, as within the last four years, the little- known headmaster in the United States has become a household name in Ghana.

When he embarked on his misdirected adventure, no one called him to account, and that is how he was emboldened to attempt to obliterate part of our history, in changing names. Just as those who attempted to erase the name of Osagyefo Dr Kwame Nkrumah from our history failed, so will Dr Vanderpuije.

The issue, however, is whether the government should not take responsibility for his overzealousness.  And now that the Theodosia Okoh Hockey Pitch has been restored, what about the Ohene Djan Sports Stadium and the High Street? 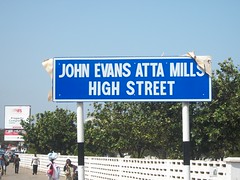 We need to learn to demonstrate a sense of nationalism and nationhood.  Definitely Prof. Mills deserves and merits national recognition, but that must come from new ideas and developments, but not to recycle old things and give them new names.  The cost could be unbearable.

There are lessons for all of us to learn.  The changing of names, for which expenditures have been incurred to engrave for solely political reasons, must not be tolerated since that could be cyclical.  All it means is that, when one party is in power, all national assets are scrambled and appropriated.  When another party takes over things are changed.  When will such reversals end, and to whose benefit?  How do we build certainty into our history and national records?

That was what happened at the 50th anniversary of the Brong Ahafo Region, where the bust of Dr Kofi Abrefa Busia was removed.  Neither Dr Busia nor Dr Nkrumah has diminished in history because some spurious attempts were made to deny them their share of our national history.

When we had the opportunity to print GH¢2 notes, we thought we were downplaying the other five of the Big Six when we excluded them, but that has not dampened the regard that some Ghanaians have for them in their role towards independence.

What it means is that we have to act when it matters and not wait until things appear to get out of hand.  The time has, thus, come for all of us to agree on transparent guidelines and the assignment of responsibility for naming national edifices and monuments.

Again, public institutions must not renege or sleep over their duties and obligations and allow impunity to triumph.  For  as things stand now, if the National Sports Council and the Ministry of Sports had spoken when the overzealousness of Dr Vanderpuije and the assembly sprouted in changing the name of the sports stadium, the crave would not have blossomed to the national hockey pitch.

And as for those assembly members who only see themselves as stooges and passive pliants, they must know that they are assembly members in the name and mandate of the electorate, not appendages of chief executives.  They must be the ones who must bow their heads in shame.  For if they had not been subservient, docile and impotent in the hands of the metropolitan chief executive, we all would have been saved the gargantuan embarrassment.

May we be thankful to God and Mrs Theodosia Okoh that she was able to withstand the dastardly act and, more importantly never allowed her voice to be silenced in defending what is right.

She saved all of us and forced the government to reverse an otherwise ill-willed decision.

Overzealousness must never be part of good governance based on the rule of law and due process.  It is not an option for rationalism.