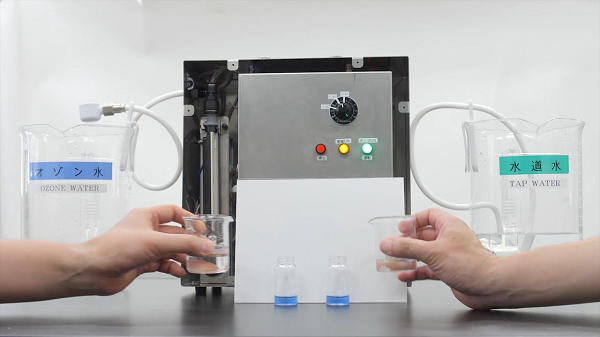 Ozonated water is water that has been treated with ozone gas. Ozone is a colourless and odorless gas made up of three oxygen atoms.

An article by Jillian Kubala, (2020) explains that in the gaseous form, ozone is an unstable molecule that can cause damage to the lungs when inhaled (as cited in Azuma et al., 2014).

A previous study by Elvis and Ekta, (2011) also found that when one dissolves ozone in water, the water becomes ozonated and could have some therapeutic effects, including antioxidant and antimicrobial properties.

It can, therefore, be used for dental services, cancer treatment, and food safety techniques.

For one to make ozonated water, one needs to fill a cylinder with purified water and allow the ozone gas mixture to lather inside. The process can take about five minutes until the maximum saturation level is reached.

Ozone as a stand-alone gas is likely to cause havoc to the respiratory system. Hence, ozonated water is the best to use than the ozone gas itself. Studies have demonstrated the therapeutic effects of ozonated water (Kuroda et al., 2015; Smith et al., 2017; Remondino and Valdenassi, 2018).

Due to the limitations and side effects of conventional cancer treatment, Höckel and Vaupel’s (2001) study found that ozonated water may improve the efficacy of chemotherapy drugs in targeting tumors.

The same authors further warned that these findings were based on a rat study and that human trials had not been conducted.

Anumula et al., (2017) study tested the efficacy of ozonated water on tooth decay as an alternative to a chlorhexidine mouth rinse.

The study involved 23 adults who had salivary samples taken at seven and 14 days of continued use of ozonated water.

The study found that there was a momentous decrease in Mutans Streptococci, a bacterium found on teeth that increases the risk of tooth decay.

Smith et al., (2017) study found that contact with ozone gas may trigger a stress response in the body. The study further noted that this response may activate the production of many antioxidants that help clear free radicals from the body.

Bonforte et al., (2013) further reported a case study of a 62-year-old woman which proved the effects of using ozonated water, in addition to antibiotics, to treat an infection (UTI).

In this study, ozonated water was administered into the urinary tract three times over one week. The case study further found that the patient recovered from the UTI, and no reinfection reoccurred in the four-month follow-up.

Due to its antibacterial properties and ability to destroy industrial impurities, ozone is regarded as an important alternative to chlorine (Sunnen, 2005; Marco and Luigi, 2018).

A recent study by Sarron et al., (2021) reports that the United States Food and Drug Administration (FDA) listed ozone as “generally recognised as safe” when used in bottled water, as well as food.

Ozonated water is also effective and safe to wash fresh vegetables to decrease the bacteria loads on the surface and support preservation (Beltran et al., 2005; Sarron et al., 2021). It should, however, be used in a controlled environment.

i. While ozone gas may pose some health risks, ozonated water continues to demonstrate therapeutic potential.

ii. The FDA considers ozonated water to be safe when it comes to drinking and coming into contact with food.

iii. In a controlled environment, such as in industrial water plants or under medical supervision, there is evidence that ozonated water may be safe to drink and use in some medical therapies.

iv. However, more research is needed to support the safety and benefits of ozonated water for oral consumption.

The writer is a Professor of Naturopathic Healthcare, President of the Nyarkotey College of Holistic Medicine & Technology (NUCHMT), and the African Naturopathic Foundation. E-mail: This email address is being protected from spambots. You need JavaScript enabled to view it..