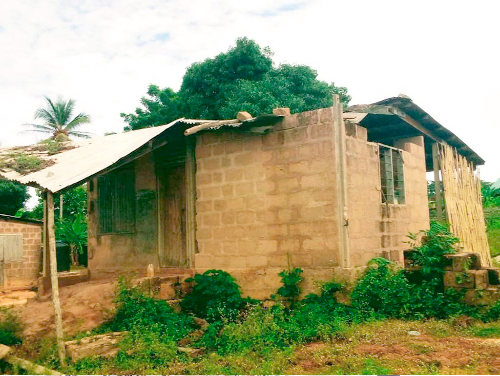 A dilapidated building in the community

Before the construction of the Akosombo Hydroelectric Dam, also known as Volta Dam, from 1961 to 1965 by the late Dr Kwame Nkrumah to accelerate development in Ghana, it became imperative to resettle residents of all towns and communities along the Volta River (not lake then).

These settlements were the ancestral homes of the residents and it meant that wherever they were going to be resettled was going to be their permanent home.

By an executive instrument (EI.54), lands were acquired at various traditional areas in the Volta, Oti, Eastern, Bono East, Northern and Savanah regions, leading to the establishment of 52 resettlements areas.

Without protestations and in the spirit of patriotism, the people agreed and were moved from their homes to what is now known as Quarters. A total of 730 communities with at least 80,000 people were displaced by the dam.

Some VRA Resettlement buildings were partially completed and have since remained so. Occupants use bamboo to complete them for habitation, while some have become uninhabitable

Despite their sacrifices, and the immense benefits of the dam to the country, these people have been subjected to all kinds of attacks, abuses and inhumane treatment in their ‘host,’ communities.

I have been to a number of these resettlements, where life is grossly unpleasant. While attending a funeral recently, I took a walk through two major streets of Dunyo-Vakpo, one of the 52 resettlements.

Not only has erosion left galleys, it has also left buildings badly dilapidated and dangerously hanging.

In a conversation, a native of Tsorxor, also in the Kpando District, told me that, the conditions of the resettlement buildings in his hometown were much worse than at Dunyo-Vakpo.

The common architectural design makes one wonder what kind of consideration went into the project. Besides, with limited spacing, with nothing for expansion, the buildings have been poorly designed.

Surely, some of the indigenes might have lived in thatch-roofed buildings before the resettlement. We must not forget, nonetheless, that their offspring might have been able to transform such buildings later, even building them new ones.

Today, however, they may not have land for new buildings.

The main roads leading to some of these resettlements have remained untarred.

At Tongor-Ahor in the Volta Region, for instance, some of the buildings look like ordinary sheds. There are no health posts, CHPS compounds or clinics in the resettlements I visited.

I must, however, express satisfaction with some academic facilities I saw on my recent visit. They were far better than when I had my basic education.

As the population grows, the demand for land for building, farming and other activities becomes a huge challenge to residents, as played out in the Begoro fracas in June this year between the traditional authorities and some settlers.

In some resettlements, residents either rent the land for farming or agree to share the crops, otherwise they will not be able to cultivate crops for food. In their former locations, they did not have such limitations.

It is prudent for the 52 resettlements to revive their associations, if defunct, for a formidable leadership on their collective concerns and mobilisation.

In the past, some traditional rulers like the late Torgbe Attieku III played a pivotal role in such associations. So far, MPs within whose constituencies some of these resettlements fall, have been a disappointment. Their deafening silence on the plight of settlers is disturbing.

The state must address the nagging perennial issue of harassment of settlers and the redevelopment of these communities with a special scholarship package for the children, not the kind that is coming from the Volta River Authority (VRA), which is woefully unsatisfactory.

The VRA can sponsor a research on the impact of its scholarship package.

Like residents of the resettlements, the conditions of Tongus, who dwell along the Volta River down the Kpong Dam, are no better.

The construction of the Kpong Dam has also adversely affected residents. Though Tongus have not been resettled to pave way for the Kpong Dam construction, the project has robbed them of sustained sources of livelihoods in farming, fishing and oyster hunting.

The dam has drastically slowed the hitherto annual flooding, which deposited rich soil for the cultivation of groundnuts, cassava and sweet potatoes, among other foodstuffs.

The near stagnation of the river allows growth of weeds on the riverbed, making fishing unattractive, as the oysters have become extinct.

Before the dam, annual flooding deposited rich soil on the banks, fertile for farming as the water receded.

Today, bilharzia has become the lot of the area, as pipe-borne water becomes scarce. In areas where there is pipe-borne water, the cash-and-carry system drives some away to utilise water from the river.

It is about time the three MPs of Tongu, the Council of Tongu Chiefs, youth groups, association of queen mothers of Tongu, and spirited citizens rose to the challenge to either demand or find a solution.

The state should not be allowed to continue to remain indifferent, while people suffer after their sacrifices of giving up their land for the good of all.